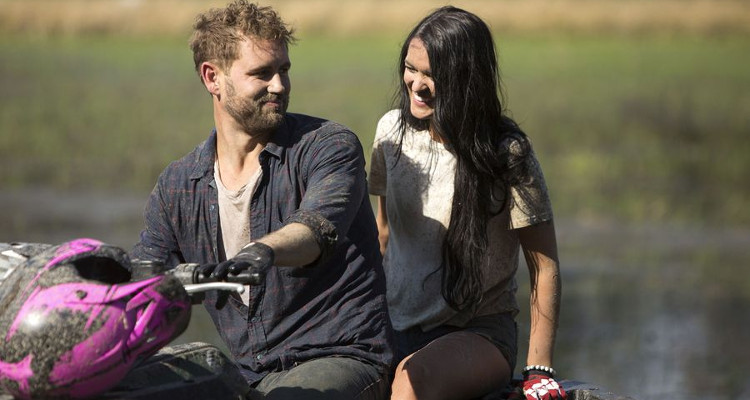 The Bachelor season 21 is down to its final three ladies vying for Nick Viall’s heart. Last night’s (February 27) episode had mending fences, an unforeseen elimination, a snowy vacation, and one contestant’s shocking revelation.

Last night’s episode of The Bachelor was a short one, but by no means less dramatic. Nick Viall’s first love, Bachelorette Andi Dorfman dropped by Nick’s room before the rose ceremony and they had a long talk, giving Nick more clarity. Vanessa and Rachel weren’t seen much and Corinne was Corinne. But the one who stole the show was Raven Gates and her revelation about her ex-boyfriend. Here’s what happened on The Bachelor tonight and a bonus about who Raven’s ex-boyfriend is. If you aren’t caught up with all things Bachelor, we warn you, this piece contains spoilers!

Continuing from last week’s cliffhanger, Andi Dorfman showed up in front of Nick’s hotel room. As Bachelor Nation remembers, Andi chose Josh Murray over Nick in The Bachelorette season 10. During the subsequent After the Final Rose special, Nick questioned her, “If you weren’t in love with me, I’m just not sure why you made love with me.” By asking this, Nick broke the sacred unwritten privacy rules of the Fantasy Suite and caused public humiliation for Andi.

After almost three years, Andi and Nick finally talked it over. He told her his season is “great” but “tough” and hinted that he might not end up with any of the women. After she gave him a surprisingly good pep talk, he had more clarity about making it to the end of The Bachelor.

And then Andi asked him if he regrets asking her that question on national television. To that, Viall said, “It didn’t take until now to probably be like, ‘Eh, probably not the best move.’ But listen, I do want you to know that my single biggest regret when it comes to you and I, when I said what I said, that it brought you a lot of heartache and a lot of pain. It’s something you had to deal with for a long time and I’ve always felt, you know, bad about that, and I’ve always cared about you and I still want you to be happy, and for that I’ve always been sorry.” So, there we have it. Nick and Andi finally buried the hatchet! 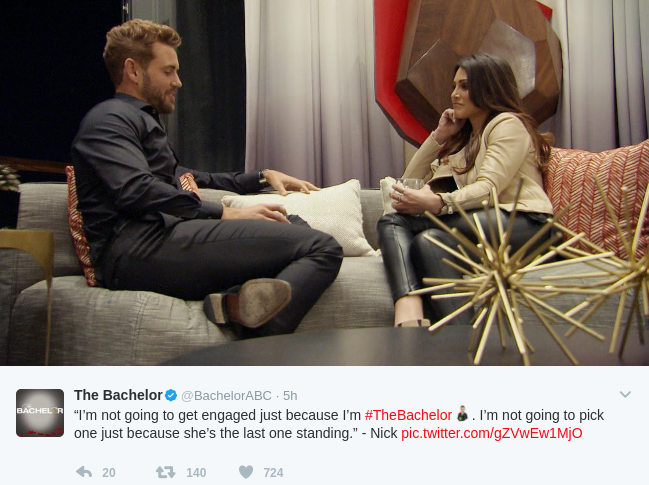 Now that Nick is thinking straight, he moves to the rose ceremony. He gives the first two roses to Raven and Rachel, and gives the final rose to Vanessa. When Corinne realized she was the one left standing without a rose, the waterworks began. Nick asks Corinne is he could walk her out, but Corinne stops Nick on the stairs and says through tears, “I’m sorry if I ever did anything to make you upset.” Nick assures her that is not the case, and hugs her tight.

After bidding a tearful goodbye to Nick and getting in the car, Corinne turns into…well, Corinne. “I am done trying to impress these men. I’m going to be me. And whatever happens, happens, but I will never kiss up to a man ever again in my life.” She then takes a nap, wine glass in hand. Classic Corinne!

…and so it was that Corinne drifted off to platinum dreams of power shopping and cheese pasta. 😴 #TheBachelor pic.twitter.com/4NkMLns8FP

Nick whisked Vanessa, Raven, and Rachel away to Finlandm where there are very few hours of daylight —which seems to have been planned for the sole purpose of the upcoming Fantasy Suite dates. We didn’t get to see much of Vanessa and Rachel as Raven got the first date of the week.

Raven hopped on a helicopter with Nick and they shared a few mid-flight kisses. The rest of their date was quite cute, especially when they played darts in a local pub with a few regulars. During their date, Raven decided it was the time to pour her heart out. She told Nick she regretted not telling him she loves him at their hometown date because of her insecurities.

What insecurities you ask? Apparently, previous to dating Nick, Raven had only ever dated only one man. She’s mentioned him once before too, back when she had a one-on-one date in Nick’s hometown. He’s the man Raven had walked in on with another woman; yes, the same man she had hit in the head with his mistress’ stiletto shoe! That’s why we love Raven!

So, it’s not enough that Raven’s first boyfriend broke her heart, she revealed something even more shocking just before this season’s first overnight date. Raven shyly explained to Nick that while she has only ever been intimate with one man, that man never made her reach, uh, full stimulation. (To clarify, poor little Raven has never had the big “O.”)

So, when she tells Nick “my last boyfriend, my ex who I was intimate with, never made me orgasm,” he and Bachelor Nation were predictably surprised. Nick, visibly speechless, somehow found the words to mutter, “Oh, I was not expecting that.” Neither were we! No pressure, Nick! 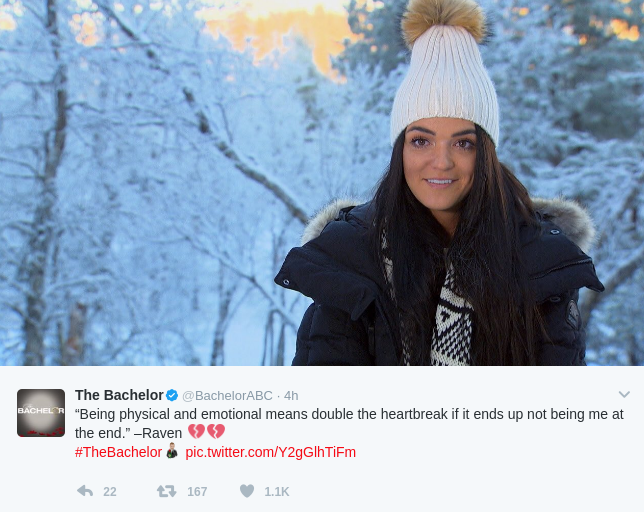 This was only the first part of Week 9, which concluded with Nick inviting Raven to the Fantasy Suite. Next week’s The Bachelor will continue with Week 9 part two, including the much-anticipated reunion special, The Women Tell All. Get your popcorn! It’s round two of Corinne vs Taylor!