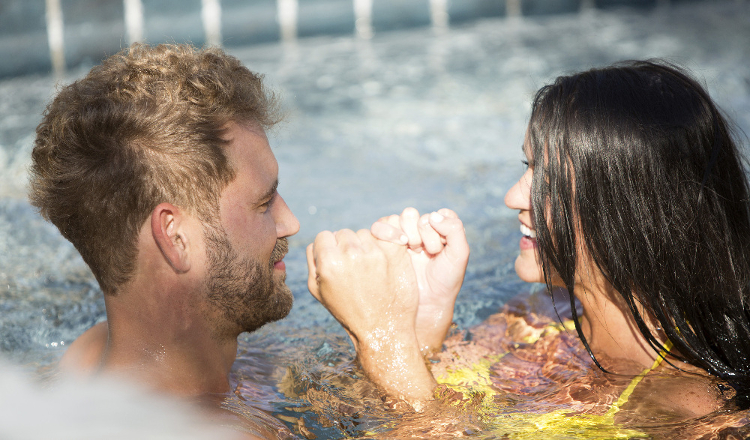 After a grueling and emotionally-charged episode last week, The Bachelor season 21 is down to four finalists and it’s now up to Nick Viall to make his final decision! Who will it be: Raven, Rachel, Corinne, or Vanessa?

The Bachelor season 21 has been one of the most “raunchiest” and entertaining seasons the ABC reality franchise has ever seen. This season’s leading man was a controversial pick, with many viewers questioning whether the thrice-rejected Bachelor alum was the right choice. However, as the season progressed, the former software salesman from Waukesha, Wisconsin began to win over the hearts of millions of viewers. With only a few episodes left until the explosive Bachelor season 21 finale, fans are waiting anxiously to see which bachelorette steals Nick Viall’s heart. Episode 7 saw emotions running high and tears flowing, as Nick and the ladies voiced their frustrations and disappointment with The Bachelor‘s elimination process. While they were complaining about not getting enough time with Nick, his fellow Wisconsin native, Danielle M. and Russian dental hygienist, Kristina Schulman were eliminated in the blink of an eye. The Bachelor week 8 will see Nick going on the much-awaited hometown dates with his final four picks:  Corinne Olympios, Rachel Lindsay, Vanessa Grimaldi, and Raven Gates. Check out the fun and exciting new Bachelor 2017 spoilers, including a surprise visit from Nick’s ex, Andi Dorfman!

After he eliminated six women in The Bachelor episode 6, Nick contemplated whether he would ever find true love and broke down in tears. The high-voltage drama continued as Corinne tried (albeit unsuccessfully) to seduce Viall when she showed up to his hotel room unannounced. Elsewhere, the solo dates went off without a hitch and Nick courted Vanessa and Raven before eliminating Danielle M. After spending a week relaxing under the tropical palm trees in The Bahamas, Nick and his four finalists will head off to their hometown dates for the nerve-racking “meet the parents” week.

The cat was let out of the bag last week when it was announced that the 31-year-old Dallas-based attorney, Rachel Lindsay would be the next Bachelorette, making her the first African-American woman to do so. Since we know that she doesn’t win The Bachelor season 21, it comes down to the remaining three finalists to win Nick’s heart. While Bachelor blogger, Reality Steve predicts that Vanessa Grimaldi will win this season, what happens on the anticipated hometown dates remains to be seen.

Vanessa Breaks Down During Her Hometown Date

Uh-oh, what has Nick done to make her cry this time? A frontrunner from the very beginning, the gorgeous Vanessa captivated the hearts of millions of Bachelor viewers with her stunning looks, sweet nature, and her profession. The 29-year-old special education teacher based in Quebec, Canada, will take Nick heads to her hometown in tonight’s episode. Last week, Vanessa confessed that she was in love with Nick and was excited about him meeting her large Italian family. She gushed, “I’m very excited to see how — and what — my family’s gonna think of Nick, and I’m just as excited to see how Nick is gonna react to a room filled with 15 loud Italian people. I hope Nick is going to be able to handle all this; it is a lot.”

In her confessional interview, Vanessa sobbed in front of the camera, “I haven’t brought anyone home in the last three years, since my last significant relationship. That was a really hard breakup for me, and it was probably just as tough on my family seeing me go through what I went through.”

Nanny Raquel Grills Nick About His Intentions with Corinne; Rachel Takes Nick to Church; and Raven’s Father has “Some Serious News”

Spoiler Alert! Knowing The Bachelor history, the show revels in shocking audiences with unexpected twists and turns and season 21 is no different. As the hometown dates kick off in week 8, Nick heads off to Raven’s hometown in Hoxie, Arkansas; Corinne’s hometown in Miami, Florida, Rachel’s hometown in Dallas, Texas and Vanessa’s French-Canadian home in Quebec, Canada. 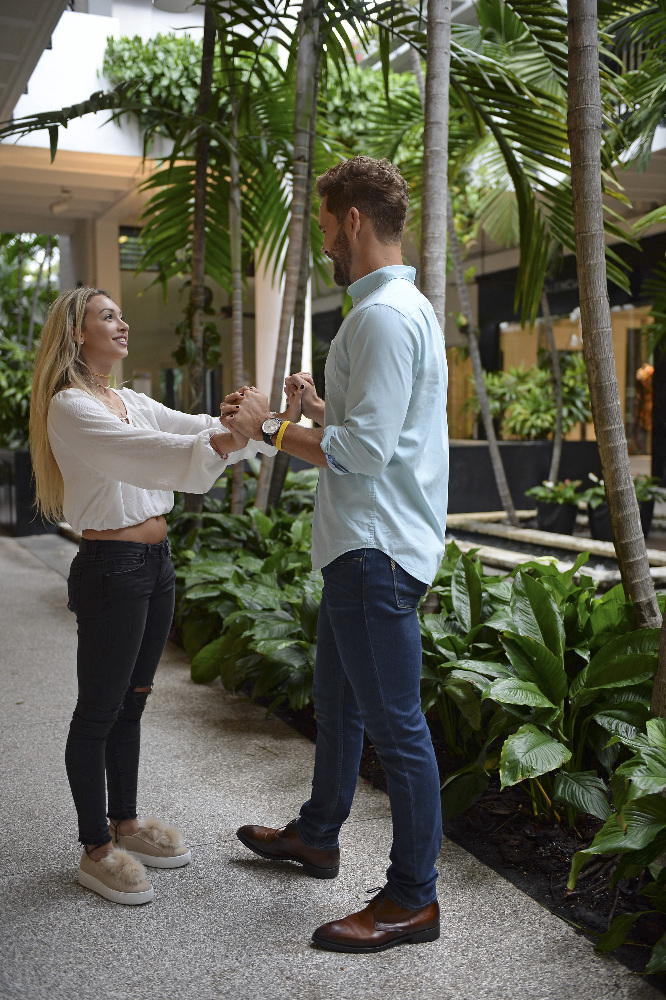 Understandably, Raven and Rachel’s respective fathers aren’t too thrilled about their daughters settling down with reality star, Nick Viall. Corinne’s nanny, Raquel puts Nick in the hot seat, as she grills him about his intentions towards the 24-year-old multimillionaire heiress. In The Bachelor season 21, episode 8, Raquel packs quite a punch! Following the hometown dates, an uninvited guest shows up at Nick’s doorstep and it is none other that Andi Dorfman! The Bachelorette‘s season 10 leading lady famously dumped Nick Viall for Josh Murray, with whom she ultimately ended her engagement with, as well. We guess some couples just don’t get their happily ever afters after all!

According to ABC’s official synopsis of week 8 for The Bachelor, “Raven Gates meets him in Hoxie, Arkansas, and the cute couple has some great, sexy fun, but Gates’ father reveals some serious news. Then, it is on to Dallas where Rachel Lindsay and Nick Viall confront the challenges that might meet an interracial couple. Olympios is waiting in Miami where her father waits with some tough questions. Finally, Nick Viall travels to Montreal to reunite with Vanessa. Although her special-needs adult students give him a big thumbs up, things don’t go quite so well with her big Italian family, especially after her father drops a bomb about Nick Viall that has Vanessa Grimaldi questioning their relationship. Just as Viall gets ready to make the gut-wrenching decision to send one woman home, he gets a surprise visitor, who could change everything.” 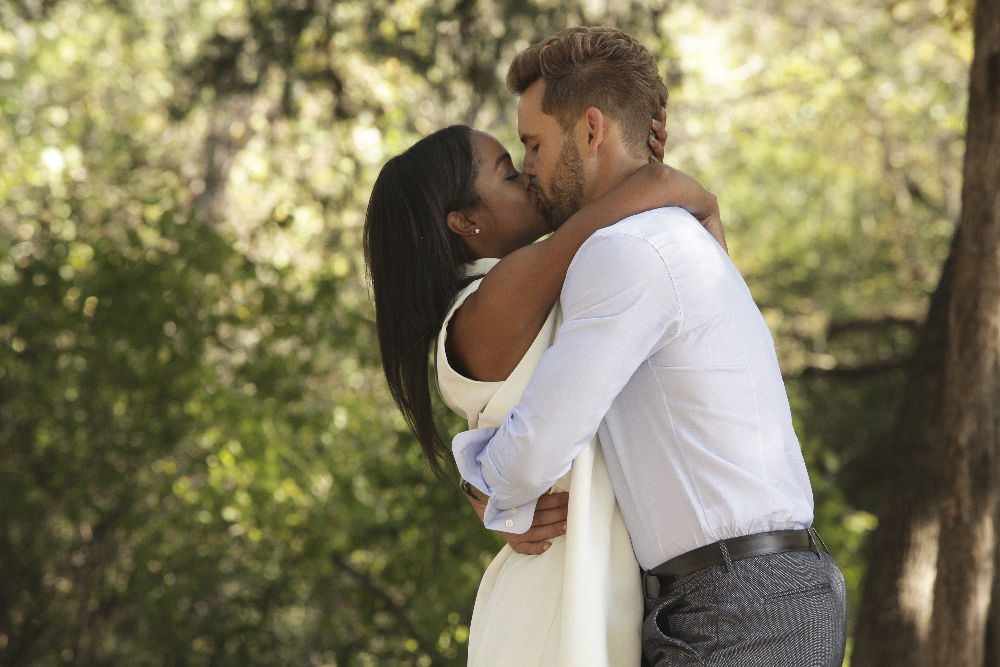