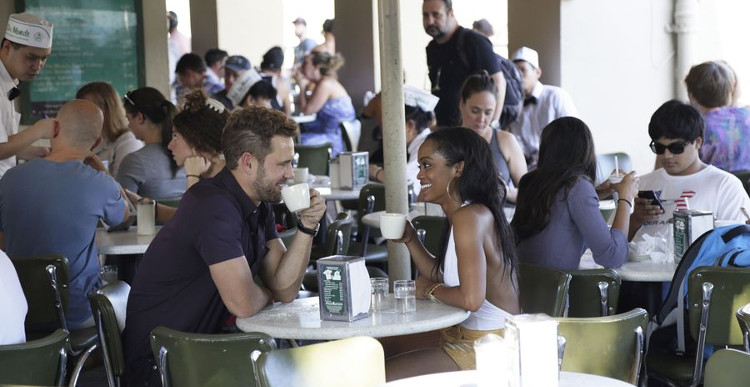 Rachel Lindsay is an attorney from Dallas and the first African-American woman to win the first impression rose on The Bachelor. In last night’s episode, she goes on a solo date with Nick Viall. Those who aren’t caught up on The Bachelor, consider yourselves warned. This article contains spoilers!

Things got heated on The Bachelor! Corinne Olympios and Taylor Nolan continued to butt heads on their dreaded two-on-one date. Corinne threw her rival under the bus, and Taylor was sent home. The show ended on a nail-biting cliffhanger with Taylor “re-interrupting” Corinne and Nick Viall. There was also a spooky group date in a haunted house, with girls communicating with spirits to predict who gets eliminated. In all that horror-filled drama, we almost forgot that Rachel Lindsay had a very romantic one-on-one date with Nick in the city of New Orleans. She established herself as a frontrunner this season, and viewers love her. Here’s everything you need to know about Rachel Lindsey from The Bachelor season 21.

After a long argument between Corinne and Taylor, the girls head to the rose ceremony, where Nick sends Astrid Loch and Sarah Vendal home. He then lightens the mood, saying that they are all going to New Orleans.

Rachel and Nick’s solo date involves shopping, eating at the Café du Monde, and Nick trying his first beignet. During their date, Rachel and Nick join in a parade, and hit a jazz club for more music and dancing.

Walking into tonight’s one on one with @nickviall like… ???????? #thebachelor #abc #bachelornation #rose???? #Nola #secondline #neworleans

They later go for a quiet dinner in a warehouse full of Mardi Gras floats. Like most of the solo dates on The Bachelor, Rachel opens up about her past, revealing that the last time she was in New Orleans, it was for a funeral. Since then, she decided to take every opportunity that life throws her and live to the fullest.

Rachel Has an Intimidating Dad

Things got a little more serious when Nick asked about Rachel’s father. Bachelor fans will know that Rachel’s dad is Sam A. Lindsay, a federal judge in Dallas. Rachel is an accomplished lawyer at Cooper & Sculley in Dallas, and she’s also an over-achiever. She got her Bachelor’s degree in Kinesiology and Sports Management from the University of Texas, her Juris Doctor (JD) in Law from the Marquette University Law School, and entered the Texas State Bar as well as the Wisconsin State Bar in 2011. By 2012, she was admitted to the U.S. District Court for the Northern District of Texas.

Rachel confessed to Nick that her father is an intimidating man. Adding that to the fact that she’s following in his footsteps, and it truly a daddy’s girl, means that Nick needs to be nice to Rachel or risk making an enemy of her father.

Nick Opens up to Rachel

At 31 years old, Rachel is one of the few contestants who are close in age to 36-year-old Nick. While they were talking about intimidating fathers, Nick shared his thoughts on them as well, saying that he gets nervous when meeting dads. The Bachelor alum had met the fathers of Andi Dorfman and Kaitlyn Bristowe when he was in their seasons of The Bachelorettes.

His conversation with Rachel showed viewers that Nick had matured a bit since his last few stints on the franchise. We can just hope that he maintains this attitude during the hometown dates, as Bachelor guru Reality Steve has claimed that Rachel will be in the final four. Which means Viall’s going to meet Judge Lindsey, and he better be on his best behavior.

At the end of the date, Viall said he enjoyed his time with Rachel, and handed her a rose. Find out what happens with Nick and Rachel, and catch up on the drama in The Bachelor season 21, Monday nights at 8:00 p.m. EST only on ABC.