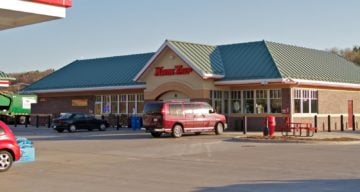 Kwik Trip, a convenience store franchise, is reportedly starting a chain of gentleman’s clubs called “Kwik Strip.” And they will allegedly be operational in October 2020. Like the convenience store’s service, Kwik Strip will supposedly make exotic entertainment fast and convenient. Is there a convenience store that is really going to offer lap dances from its employees? As the report might suggest, this is simply satire.

Kwik Trip Inc. runs convenience stores throughout Wisconsin and Minnesota. And a local Wisconsin news site claims that the chain is expanding to exotic entertainment.

The La Crosse Times from the city of La Crosse in Wisconsin claims that Kwik Trip Inc. is going to open Kwik Strip in October 2020. The new chain is supposed to be a gentleman’s club alongside its regular services.

The site even has a silly quote from a supposed Kwik Trip Inc. executive. And it mentions the rebranding of some of its product lines for the new franchise.

This claim might sound hilariously ridiculous, because that’s what it is. It’s not a real report and Kwik Trip isn’t making any exotic expansions.

The La Crosse Times is a satire and comedy website run by the witty and funny folks of Live! From La Crosse, a local sketch comedy troupe. This funny hoax news is one among its many hilarious headlines, and it’s bringing some laughter and confusion online. Rest assured, you can take this news report for what it is—a much-needed laugh.