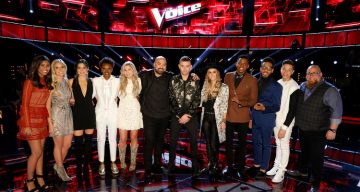 Last night was the first Live Performance Round of The Voice 2017. The Top 12 artists displayed some serious talent in order to secure their place in the competition, as The Voice results are revealed today. Fair warning, this piece contains a few spoilers!

The Voice kicked off the Live Performances on Monday night (April 24) and the artists pulled out all stops. The divine Shania Twain was a mentor to The Voice 2017 contestants and even tried on a fifth chair for size! With Twain joining the other coaches, we got to hear what this season’s lineup is like, and the audience will be the ones to decide who The Voice season 12 winner will be. After last night’s performances, it’s obvious that some contestants are shoo-ins to move forward in the competition, while others look like they might be appealing for the Instant Save tonight. Here’s a look at the Top 12 artists on The Voice and their first Live Round performances.

Coach Adam is already betting on Larson to make it to the finale. This time, he opted to leave his guitar and gave a vocal-driven performance of Adele’s “Make You Feel My Love.” While Adam Levine heaped praises on the 34-year-old, Shania Twain called him the “best pure singer” in the competition. While some think this wasn’t his best performance so far, they’re confident he’s going to be safe from elimination.

Coach Adam’s other star, Mark Isaiah performed “One Dance” by Drake (ft. Wizkid and Kyla) for his Top 12 debut. He had a narrow escape from elimination when Levine saved him during the Live Playoffs last week. “You present yourself with dynamics. You move at the right times,” Twain said about his performance.

The most emotive singer this season brought her rendition of Dido’s “White Flag” to the Live Rounds. It was Coach Alicia’s song choice and Rice, who claims she never heard the song before, wanted to do a haunting rendition of it. Keys pointed out that the entire arrangement was done by Rice and it was evident that her performance left everyone in awe, and they want her to stay.

Also Read: Where is Hunter Plake on “The Voice” From?

Troy Ramey sang Tom Petty’s “Free Fallin.’” Team Gwen’s artist had been warned by Stefani and Twain about tweaking the song too much. Many loved his song choice as it’s an obvious classic fan favorite, but Ramey made it his own as he displayed a gentler side of his voice at parts, and a more powerful tone at others. And Coach Gwen was right, his personality definitely came through for this one. He might be one of the most underrated competitors on the stage this season!

Moulden sang her rendition of “Heat Wave” by Martha and the Vandellas. She was saved by Coach Blake in the Live Playoffs, but her performance this time didn’t seem to redeem her. She was soulful as always, but Twain cautioned her against over-singing and gave some technical advice.

Everyone was probably waiting for this performer from Team Alicia —and with good reason! Singing “Love and Happiness” by Al Green, Blue brought the coaches and the studio audience to their feet with this classic song choice. “You brought everybody from a cool, collective place to exploding with you,” said Twain, who was extremely impressed with him.

She’s established herself as one of the strongest country singers this season with her rendition of “Lord, I Hope This Day Is Good” by Don Williams. She even had a cute fangirl moment when she met Shania Twain, an obvious idol of hers since she was young. The Voice or not, we have a feeling Duski’s going to make it big in the country scene!

Passero was burdened with singing a Shania Twain song to Shania Twain. Performing the Canadian songstress’ “Man, I Feel Like a Woman,” it appeared the pressure got to her. Passero wasn’t well enough to attend her coaching session with Twain. So, Twain and Levine gave her some advice over Skype.

The youngest contestant in the Top 12 tackled “Long, Long Time” by Linda Ronstadt. On a night with a lot of classic and slower song choices, Brown delivered spectacularly. And everyone loved her performance so much, the Team Gwen artist’s votes were multiplied by five for her song making it in the iTunes Top 10!

Coach Blake picked “Always On My Mind” by Willie Nelson for this artist, who Twain rightly called a vocal gymnast. He even took her advice and adapted to showcase a resonant performance. We want more from TSoul and we’re sure he’ll make it to the next round easily.

Team Gwen’s Plake put his own twists on Gotye’s “Somebody That I Used to Know.” “I was at a full blown-out concert just now,” Twain said, accurately summing up his performance. And Stefani lauded his producer abilities for putting together this arrangement himself.

Closing the night was Team Alicia’s, Vanessa Ferguson with “A Song for You” by Donny Hathaway. Though she’s had more memorable performances before, she did more than enough in her Top 12 performance to vote her through. As Keys put it, “If you want magic on this show, you vote for Vanessa.”

The Voice season 12 airs Mondays and Tuesdays at 8:00 p.m. EST on NBC. Who’s safe and who’s going home after the Top 12 Live Performances? All will be revealed tonight!