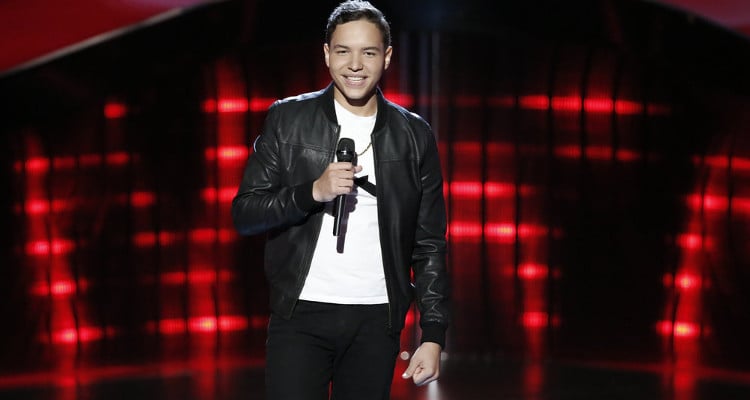 Mark Isaiah wowed the coaches during The Voice Blind Auditions and proved that he could be the next Shawn Mendes. Then, the teen singing sensation took over the Battle Rounds and is all set for the Knockouts.

The Voice Battle Rounds have wrapped up, and it’s time for the Knockout Rounds. Coach Adam Levine has a strong contender in the form of Mark Isaiah, an artist who echoes another teen music sensation. Isaiah sang Zayn Malik’s, “Pillowtalk” with Gaby Borromeo in the Battle Rounds. But, Adam Levine had to let Borromeo go and picked Isaiah as the victor. Find out more about Team Adam’s young artist, right here in our Mark Isaiah wiki.

He Shed a Few Pounds and His Inhibitions

Mark Isaiah Peralta was born in New York, before his family moved to Jersey and then settled in Mount Pocono, Pennsylvania. He graduated from East Stroudsburg South High School in New Jersey in 2015. His father, Robinson Peralta, is an entrepreneur while his mother, Frachely Peralta is a registered nurse. The 19-year-old has a four-year-old brother, Robinson Jacob Peralta who simply idolizes him. Mark’s bio on his Instagram says that he’s also into acting and plays the piano.

Contrary to his charming personality on The Voice, Isaiah was completely different in high school. He was an overweight teen and consequently very shy. But finding his passion for music encouraged him to lose weight. He lost 40 pounds and gained a new sense of confidence. Now, he looks forward to singing in front of strangers.

Also Read: Lauren Duski Wiki: Everything You Need to Know about “The Voice” Contestant

He Wants to Make His Parents’ Dream a Reality

Isaiah discovered his musical passion through worship singing at a young age. He would sing with his family at their local church in Hasbrouck Heights, NJ. Both his parents are singers, and he names them as his musical influences above artists like Michael Jackson, Usher, Justin Bieber and Chris Brown.

“My mom is an amazing worship singer, and my dad has always had the dream and passion of becoming a salsa artist,” Mark Isaiah said to a local publication in Pocono. “My parents had me when they were both young and have dedicated their lives ever since to providing for me. Since I feel like they never got the chance to pursue their own dreams, I couldn’t be more proud to make my dreams a reality for all of us.” Isn’t he the sweetest son!

He Realized His Dream Thanks to Justin Bieber

Justin Bieber didn’t physically meet Isaiah, but his music did have a role to play in changing the teen’s life. Though active in his church choir, singing solo in front of a crowd was a foreign concept to the young Mark. Nevertheless, he gave it a try, and at 14, he realized his potential to be a singer.

Isaiah participated in a national singing competition when he was 14. The winners of which would get a chance to watch a special screening of Bieber’s movie, Never Say Never before its public release. Isaiah sang Bieber’s iconic debut hits, “Baby” and “You Smile.”  He won his first public performance in a competition, and it was a life-changing moment for him.

“Our family got to go to Los Angeles for three days for the movie screening. I felt like we really received that star treatment. We got to the purple carpet and watched all those artists and fans and cameras.” Isaiah said, “Just everything about that moment really drove me to wanting a change.”

Between graduating high school and going to college, he lost his excess weight and began performing to crowds. He also writes his own songs now, “When I’m about to perform, in my mind, I just take a deep breath before I start. It’s very important to interact with the audience. I make it a point to show the emotion of each song when I’m singing it. There are still many things to work on, but practice makes perfect.” Since then, Isaiah has been singing covers of popular songs and uploading them on YouTube.

He Could be the Next Shawn Mendes

Isaiah stepped up to the Blind Auditions and sang Shawn Mendes’ “Mercy,” getting Adam and Gwen to turn their chairs for him. While Alicia and Blake were equally impressed, Adam and Gwen resorted to playfully fighting over the young singer. He became an artist for Team Adam and from the sound of his voice (and because he’s just adorable!), he could be the next Shawn Mendes.

Gwen and Alicia said, his voice was “modern” and “dope” —something Mendes is also famous for as a musician of the current generation. Their comparison doesn’t stop there! They’re both in their teens and write their own songs. Mendes posted his song covers on Vine and Isaiah posts his on YouTube. They even look alike!

Mendes is busy with his Illuminate World Tour right now, but he should keep an eye out for Mark Isaiah. Coach Adam’s artist hopes to have number one hits on charts in the next five years. He also wishes his family to be in a financially comfortable position. He’s got the makings of a star, so he’ll have a high net worth soon. Perhaps Isaiah and Mendes could collaborate in the future?