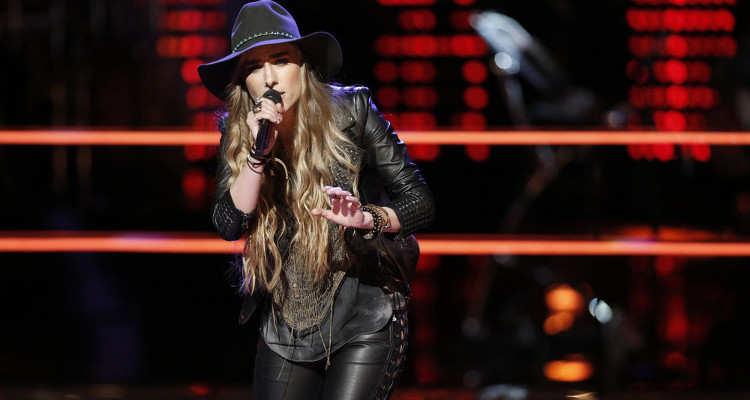 From the moment Stephanie Rice appeared on The Voice season 12, she moved the judges and the viewers with her voice and story. Team Gwen’s remarkable artist is definitely one to beat!

When Stephanie Rice first stepped up to The Voice stage, she moved the coaches with her voice and then her story. In the Battle Rounds, Stephanie Rice and Caroline Sky sang Cat Stevens,’ “The First Cut is the Deepest”. Gwen Stefani chose Rice while Sky was stolen by Coach Gwen’s beau, Blake Shelton. Rice is now prepared for the Knockout Rounds. After her emotional story at the Blind Auditions, we’re sure you want to know more about this dynamic artist. So we’re sharing with you our Stephanie Rice wiki!

She has an Emotional Coming Out Story

Stephanie Rice is an openly gay rocker, who came from a conservative family in Texas. Rice’s musical beginnings started from the Church where her father was a pastor. She performed in the worship group with her mother. But when she came out to her parents, things didn’t go so well.

When her parents found she was in a relationship with a girl, her father didn’t was furious. He nearly made a scene in her school, but the school counselor saved Rice in time. But that wasn’t the end of her long struggle for acceptance. “I just kept that part of my life as secretive as possible. My parents made me go to ‘straight’ counseling, and I did all of that because I was scared. But I wasn’t really changing,” explained Rice.

She was named Salutatorian at her high school graduation. But her father didn’t let her give her speech or accept her awards on her graduation. “He told me I wasn’t ‘fit’ to set an example for anyone,” she said.

In college, she met her first real girlfriend, and her dad heard about it. Though they weren’t in a relationship then, Rice said they were dating because “I was miserable living that lie and that I was happiest when I was being my true self.” That was the incident that made her parents disown her. Rice said she didn’t even get the chance to say goodbye to her two little sisters.

Standing on Her Own Two Feet

Rice’s father gave her the option of going to straight counseling or being disowned by her family. When she chose the latter, they made her pack her bags and they drove her to her college campus. They dropped her off in the parking lot with her belongings and left. The 27-year-old even ran after the car. However, the worst moment of her life then took a better turn.

Surveillance cameras in the parking lot caught the scene on camera and campus police who watched what happened, arrived. They came to the parking lot and asked Rice what was going on. “So I guess my first real ‘coming out’ was to a police officer of a conservative town. I thought they were going to tell me it served me right, but instead, they told me they would never allow my parents on campus again,” said Rice.

They used the footage and testimonies from the policemen, along with letters of recommendation from her professors, to prove her financial independence and get financial aid at the University of Houston.

“Until you’re 24—and I was only 19 or 20 at the time—the state doesn’t see you as an independent student, so therefore you have to use your parents’ financial information to receive financial aid. Well, my parents weren’t going to give me that information even if I tried. But I was able to get early independence and be granted the full, maximum amount of financial aid from the university, and that’s why I was able to move to Houston. That’s what changed my life in a positive way,” said Rice.

Though she has reached out to them many times, Rice doesn’t have a relationship with her parents anymore. She does have two older brothers who stand by her and Janeth, her loving fiancee.

Her Initial Love was Sports

Though Rice began singing in Church at an early age, she never saw herself as a singer. The Straight-A student excelled in sports, especially basketball. She had earned a basketball scholarship to a college, but her father didn’t let her go there. Instead, she attended the local community college.

When she received financial aid, she went to Houston with a cheap car and guitar. At the University of Houston, she taught herself to play the guitar. Her motivation came from when her grandmother gifted her with a piano when she was just a child. She learned it herself and began writing her own songs when she was eight.

“So when all this happened, and I was kicked out, I got a guitar and started teaching myself how to play because music was immediately what I wanted to lean on. But I didn’t have a piano, so playing the guitar became what I like to call my “audio journal,” explained Rice.

She Has Her Own Band

While performing at open mic nights in Houston, she graduated from UH with a degree in biology. She worked at the Baylor College of Medicine and became a published author in the International AIDS Society. Back then, she had auditioned for The Voice 2012, but didn’t make it past the open calls. Not one to get down, she formed her own band with drummer, Corey Chierighino and guitarist, Jonathan Ward.

They’re called Colonial Blue and their songs, written and sung by Rice, are from her personal story. They released their debut album in 2016 called Dear Misery. While they were performing in bars around Houston, she got a call to audition for The Voice season 12.

She sang Kelly Clarkson’s “Piece by Piece,” that landed her a spot on Team Gwen. She not only moved the other coaches but the original songstress, Kelly Clarkson, too! The American Idol winner even tweeted about Rice’s Blind Audition!

Can't. Stop. Crying. 😳 Her vulnerability and her story ….just wow. Steph, I hope ur parents open their hearts 2 the beautiful person u r! https://t.co/p6FKPBnvKU

Stephanie Rice is now heading to the Knockout Rounds. Don’t miss The Voice on Monday and Tuesday at 8:00 p.m. EST on NBC!