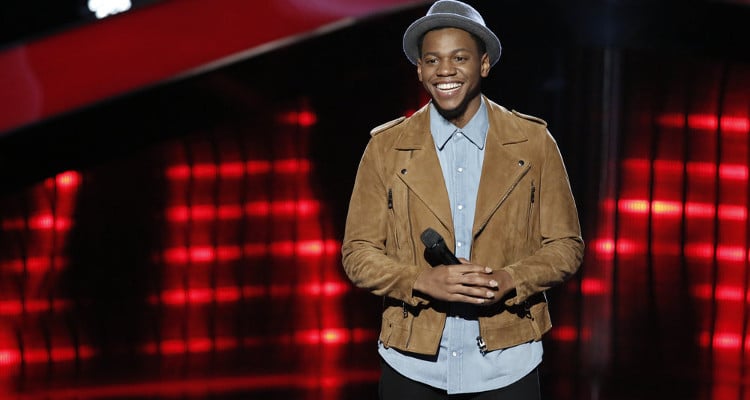 Chris Blue from Team Alicia won the Battle Rounds against RJ Collins and has advanced to the Knockout Rounds on The Voice. Here is everything you need to know about the guy who has mesmerized audiences with his voice.

The Voice started on February 27 and the contestants just keep getting better and better! There are many talented artists on board The Voice season 12, who have stolen the hearts of both the audience and judges with their incredible vocal abilities. One person who enticed Alicia Keys to turn her chair around is Chris Blue.

Episode 10 of The Voice was entertaining and heartbreaking, as two contestants from each team battled it out (duet-style) for the judges and audience, in order to make it to the next round. Chris Blue faced off against RJ Collins in the Battle Rounds and emerged victorious. Chris Blue even managed to catch Blake Shelton’s attention, with the country singer saying, “I’ve been doing this long enough to know that Chris will be in the finale.” So, just who is the guy with a mesmerizing voice and where is he from? We have details about Chris Blue from The Voice, right here.

The 26-year-old singer is from Knoxville, Tennessee and is the youngest of the seven children, who spent his childhood watching his older siblings perform. Chris’ family is heavily involved music, so it comes as no surprise that he sings very well. While growing up, Chris began playing gigs in his family gospel band with his siblings (two sister and four brothers) at the age of just three. His mother, Janice Blue Williams said, “He was designed to do this; In my beauty salon he would get my shampoo capes and hairbrush and combs and sing to my clients and they would give him a dollar, and I thought this child was born with courageous and boldness.”

According to Chris, “I was always the little Michael Jackson on the side, just wanting to be up there with them, but I was just too little.” When Chris turned three, he got the chance to shine. During an interview, he proudly said, “It was a song called ‘Doctor Jesus Said’ and we get to this one part where like I’d bend down and do this high ‘for youuuu’ and the church went crazy and I guess their response told my mom this kid’s got something.”

Chris Blue’s fiancée Stephanie, who has battled cancer, had so much willpower and strength that it gave him the courage to audition for The Voice.

Since that shining moment in church, Chris Blue and his brothers formed their own band called the Blue Brothers, and continued to perform at events like birthday parties and sporting events, and they even appeared on national TV when they were featured on BET! Before his family moved to Knoxville, they lived in a small town in Florida. Currently, Chris is a worship leader at Cokesbury Church and he firmly believes that it is because of God that he got the chance to come on The Voice. “Faith is not only necessary, for me in this journey, it is essential,” he said. “Without God, without Christ it wouldn’t be possible, I would not have the voice to sing if it hadn’t been for him.”

His Journey on The Voice

Wahoooo!! When you can finally let loose and BREATHE!! Because @aliciakeys turned around for you on @nbcthevoice #voiceblinds last night!! #season12 #TeamAlicia #teamchrisblue #teamlove #Family

When Chris first appeared on The Voice, he got Alicia Keys to turn her chair around with his incredible range. After his The Voice performance, Chris did a little celebratory dance and Alicia joined in! Chris’ soulful and deep voice did not fail to entice the judges and the audience, as he sang “The Tracks of My Tears” by Smokey Robinson & The Miracles. His soulful and profound voice earned him the last spot on Team Alicia, who was more than happy to acquire Chris to her team. When she asked about where he learned his vocals, Chris said, “God, my mama, and my family. A little bit of Adam, too. Just a little bit though.” Keys mentioned that she was looking for a particular male voice to complete her team saying, “Someone who was a little bluesy and soulful. And boom!”

Chris Blue’s mother and fiancée, Stephanie were supporting him during his Blind Audition and were invited on to the stage, where he shared the heartwarming story of Stephanie’s battle with bone marrow cancer, which nearly took her life. “While she was in her operation, she flat-lined, and I begged God to bring her back, and He did. And when He did, I said ‘I’m not letting you go again,’ so I proposed,” Chris revealed.

Also Read: Caroline Sky vs. Stephanie Rice on “The Voice” 2017: Who Will Win the Battle Rounds?

The Battle Rounds on The Voice

Go get iTunes: http://apple.co/Adorn Wow again guys the love and the support has been so amazing!! I'm truly grateful to God for all of you my #Family for being so supportive and caring!!taking out the time to comment, share, and like posts!! It really means so much to me, let's keep it going click this link and go get the iTunes if you haven't already!! I LOVE YOU GUYS!!!! #teamalicia #teamchrisblue #teamlove #Family

The battle round between Chris Blue and RJ Collins took place on Tuesday (March 21). They each got the chance to work with their coach and Team Alicia’s adviser, DJ Khaled. “When I saw DJ Khaled, I about lost my mind,” said Chris, who was visibly thrilled to see DJ Khaled. Chris and RJ sang “Adorn” by Miguel, allowing both singers to showcase their soulful voice.

The Battle Rounds on The Voice are still underway, and all four judges will have the tough task of dwindling their teams to the Knockout Rounds. See who makes the cut on The Voice, airing Monday and Tuesday nights at 8:00 p.m. EST on NBC!