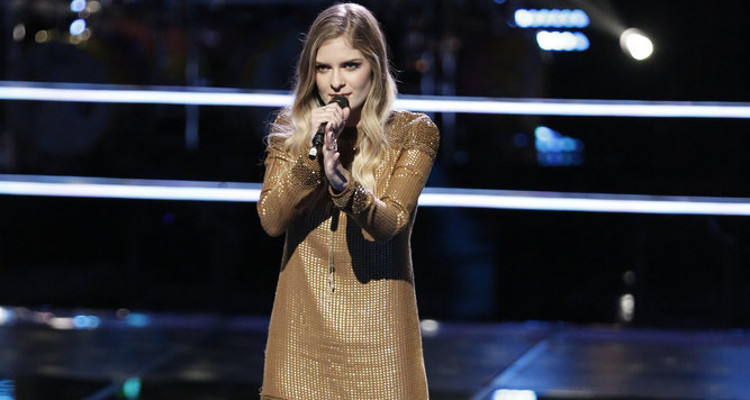 Lauren Duski from Team Blake has won the Battle Round against Brennley Brown. Now, she has advanced on to the next stage of The Voice. Here is everything you need to know about the girl who was definitely meant to be on this show.

The Voice season 12 has come a long way —long enough for us to decide who our favorite contestants are! There are several contestants who have the potential to win season 12 of The Voice. One who mesmerized Adam Levine in the first few seconds of her performance is Lauren Duski. Although Adam was the first one to turn his chair, Lauren had three coaches turn around for her, and decided to be on Blake Shelton’s team.

Episode nine of The Voice was entertaining and heartbreaking at the same time. On Monday (March 20) we saw several contestants compete in the Battle Rounds. But only one singer from each round could make it to the Knockouts, unless they were stolen by another coach.

Lauren Duski went up against fellow Team Blake member, Brennley Brown. Though, that does not mean it was the end for Brennley. Gwen Stefani stole Brennley to her team, meaning she too will compete in the Knockout Rounds! Who is this girl with the mesmerizing voice and where is she from? Let us find out more about Lauren Duski from The Voice.

At 25, Lauren Duski is from Northern Michigan and currently lives in Nashville. She was born in Maine, but spent 18 years of her life in Gaylord, Michigan. Her parents are both dentists and she describes them to be very outgoing and supportive. From a very young age, Lauren traveled a lot around the state to perform music.

Lauren’s Parents Have Always Encouraged Her

#hometeam Still have to pinch myself every day for these two. Lucky is an understatement. Without you behind me from the beginning I would not be here sharing music with you all today. Thank you for never giving up on me, and for never letting me give up on myself. You show me every day what it is like to be truly selfless. Way to set the bar high mom and dad! I love you. @janisduski @duskidds #VoicePremiere #TeamBlake #TeamLauren #VoiceBlinds

Lauren comes from a medical background, as both her parents are dentists. During an interview, she revealed that she also thought about following in their footsteps, and even enrolled herself in a pre-dentistry program. However, music was always her passion and her parents always supported her to follow her dreams. In her junior year, she decided to concentrate on her music career after graduating, and hasn’t looked back since.

Her Journey on The Voice

When Lauren Duski had her Blind Auditions, she impressed three coaches with her beautiful voice. Adam Levine was the first one to turn his chair around as she performed Jewel’s “You Were Meant for Me.” Blake and Gwen were next to turn their chairs. Currently, Lauren is touring Michigan with the JR Country Band. Her voice is hauntingly beautiful, and there is no doubt that she will make it far on the show.

For the Battle Rounds, Lauren Duski and Brennley Brown competed against each other. They performed Little Big Town’s hit called “Better Man” and managed to impress all the coaches, making the choice even more difficult for Blake Shelton. However, Blake chose Lauren to move on to the Knockout Rounds. But, things worked out for Brennley who was stolen by Gwen Stefani.

Now that the Battle Rounds are over, the Knockout Rounds will premiere on April 3 at 8:00 p.m. EST on NBC.