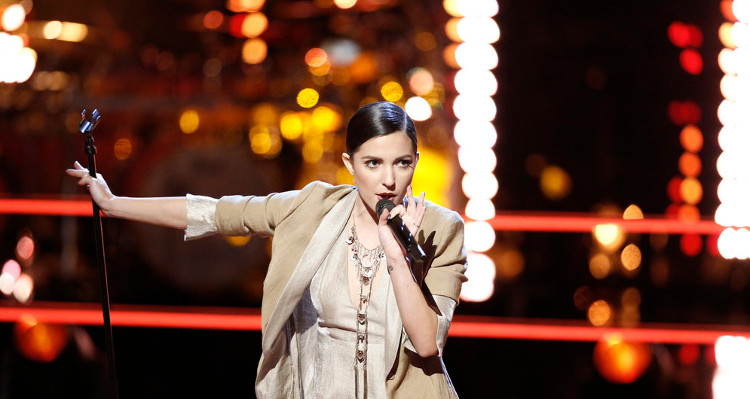 On Monday night’s Knockout Round of The Voice, Lilli Passero and Ashley Levin competed against each other. Although Ashley won, Lilli was spared by coach Adam Levine. Here is everything you need to know about Lilli Passero from The Voice.

Monday night (April 3) saw The Voice contestants, Lilli Passero and Ashley Levin try their best to out-sing each other in the first episode of the Knockout Rounds. Alicia Keys named Ashley Levin as the winner, but it was not the end for Lilli, who was stolen by Adam Levine.

For the Knockout Round, Lilli sung “Tears Dry on Their Own,” by the late Amy Winehouse. After their performances, coach Gwen Stefani thought that Ashley did the better job, whereas Adam Levine and Blake Shelton thought the win should go to Lilli Passero. Adam said that Lilli has the potential to win the show, and Blake described her as, “calm, cool, and collected, she’s just doing what she knows she was born to do.”

However, Alicia decided to go with Ashley Levin. Blake and Adam both pressed their buttons to stealbLilli, but she chose to switch to Team Adam. Who is this girl who got a second chance to stay on The Voice? We have details from Lilli Passero’s wiki right here.

I want to give a special shout out to my incredibly supportive family. It's easy to take support from family for granted, because it seems like an obvious thing to get from them. Unfortunately so many people do not experience this. Their families don't support them and believe in them. Sadly it's usually because they are fear based people who don't know how to believe in themselves, let alone anyone else. Maybe because they're scared of failing or looking foolish or getting hurt. It's different for everyone. So, knowing this, it's important that I acknowledge every single person in my life who has pushed, motivated, and believed in me. Thank you family. Thank you friends. Thank you coworkers and peers and teachers and mentors. And of course thank you strangers who I've never met but who, since seeing me on The Voice, have begun following and believing in me. In this picture are the 4 wonderful people who could be with me on the day of my blind auditon: my beautiful parents Jeff and Liz, my life long best friend Megan, and my love Anthony. I wish my sisters, Sasha and Izabella, could've been there too, but they were busy kicking ass in NYC ✨ I LOVE YOU ALL ❤ #TeamLilli

The 26-year-old is a part of a very talented family. According to Lilli’s bio on NBC’s web site, her parents are the “ultimate theater nerds.” Lilli has always been passionate about acting, singing, and performing, leading her to study at Carnegie Mellon University. After graduating, Lilli moved to Hollywood to further pursue acting. She had many auditions and even landed roles in short films and was featured on an episode of NBC’s, Go On. Currently, Lilli works as a waitress (who once served Gwen Stefani!) but still goes for auditions when she can. She had a starring role in Cabaret, for which she received positive feedback on her singing.

Lilli’s parents, Liz and Jeff Passero have worked in LA for a very long time as actors, coaches, and casting agents. Lilli’s sisters, Sasha and Izabella, are also looking to make it big. Sasha is a talent agent and Izabella is studying at New York’s Fashion Institute of Technology.

Also Read: Ashley Levin Wiki: Everything You Need to Know about “The Voice” Contestant

Lilli Passero on The Voice

How are the #Knockouts already next week?! I don't know about you, but I'm still reeling from the #VoiceBattles. It was such a treat to be given that hidden gem of a song. I would sing it again and again and again. I hope you're all enjoying it!! Thank You @aliciakeys !!! #TheVoiceSeason12 #TeamLilli

Initially, Lilli Passero was hesitant to audition for The Voice. However, her parents were the ones to convince her. “They sat me down and had an intervention. They said ‘We know the competition thing scares you, and this is something you would never normally consider doing, but we believe in you too much for you not to be having more going on with your career.” Lilli explained. According to Lilli, her parents said, “This could be a great platform for you, so it’s time for you to share with the world what you can do, and stop avoiding it because you’re scared.”

During her Blind Audition, Lilli sang, “A Love of My Own,” by Carla Thomas. The first chair to turn was coach Blake Shelton, followed by Gwen Stefani and Alicia Keys. All the three judges were mesmerized by her voice.

Blake told Lilli that “there is something so classic about her [voice].” Alicia praised Lilli’s performance as being “so cool,” and hoped to explore her sound together. Gwen was also impressed with Lilli’s theatrical style and vintage sound. In the end, Lilli decided to go to Team Alicia.

Also Read: Caroline Sky Wiki: Everything You Need to Know about “The Voice” Contestant

Battle Round Between Lilli Passero and Lauryn Judd

During the Battle Round on The Voice, Lilli Passero and Lauryn Judd faced off against each other. They performed “Every Little Bit Hurts” and put their all into the song.

Gwen Stefani appreciated Judd’s “signature sound” and called Passero’s performance “mesmerizing.” Her vote ultimately went to Lilli. Adam Levine was impressed with the fact that Lauryn had “equal ability” even though she is just 17, but also thought that Lilli was the stronger performer. Blake Shelton agreed that Lilli “sang the crap out of [the song].” Alicia agreed with her fellow coaches and sent Lauryn home.

Now that the first wave of the Knockout Rounds is over, the second wave will air tonight (April 4). The Voice airs Monday and Tuesday nights at 8:00 p.m. EST on NBC. Check out Lilli Passero’s performance during the Knockout Round below: