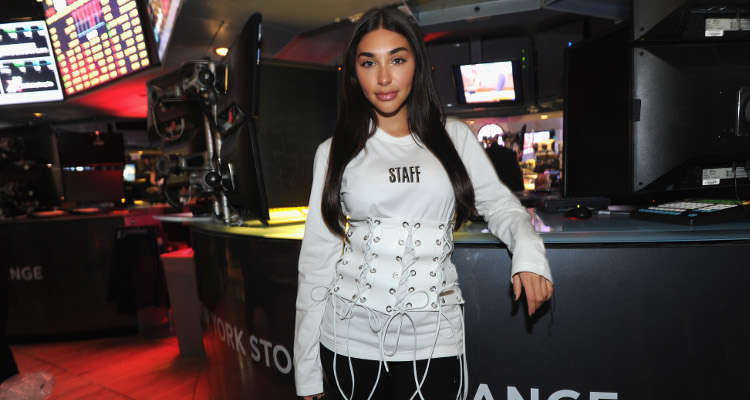 Chantel Jeffries is a model with Wilhelmina Modeling Agency and a social media star, thanks to her makeup and style tutorials on YouTube and Instagram. Social media fame aside, she came to mainstream attention when she had an apparent romance with Justin Bieber. From then on, she’s been romantically linked with several of the hottest male celebrities around. Want to know who Chantel Jeffries’ boyfriend in 2017 is? Check out her dating history right here to find out!

Back in 2011, the model was reportedly dating Sean “Diddy” Combs’ son, Justin Combs. Not much is known about their relationship except that they broke up in 2012. She has also dated NFL wide receiver, DeSean Jackson who played for the Philadelphia Eagles at the time (he now plays for the Tampa Bay Buccaneers). Her other reported boyfriend was Justin Bieber’s friend, Lil Twist.

Before he cozied up to the youngest Kardashian-Jenner, Travis Scott was in a rumored romance with Jeffries. They were linked when she appeared in the music video for his 2015 track, “90210.” The romance rumors were further fueled by their Snapchat pictures allegedly about missing each other. However, replying to an Instagram comment, she said that she wasn’t an item with Scott and had a boyfriend at that time.

Jeffries was first spotted with Justin Bieber back in 2014 and was with him during his DUI arrest in Miami. This romance was never confirmed, though it brought her a lot of attention. With Bieber’s arrest, her own bad girl past was revealed. Jeffries has her own arrest history with charges like speeding and assault with a deadly weapon.

With her rap sheet and history of high-profile romances, Jeffries gained the reputation of a social climber. Her friend from when she was 18 claimed that Jeffries was desperate to land a famous boyfriend since high school so she could further her modeling career. The truth is anyone’s guess, but Jeffries brushed off the comments saying that it’s the price of being in the public eye.

In 2016, Jeffries was said to have rekindled her romance with Justin Bieber though it was once again unconfirmed. After musicians and football pros, she expanded her boyfriend list to the NBA. Last year, Jeffries reportedly had brief romances with LA Lakers’ Jordan Clarkson and Cleveland Cavaliers’ Kyrie Irving.

After dating NFL and NBA players, she turned her attention across the pond to the Premiere League. She was spotted with Manchester United’s Paul Pogba on undercover dates. Though it wasn’t confirmed, it looked like the 23-year-old is in a relationship with the French soccer player until very recently.

Kourtney Kardashian broke up with Scott Disick for the nth time and possibly for good. She jumped back into the dating pool, allegedly dating even Justin Bieber. She’s currently dating model, Younes Bendjima who is much younger than her. In a big show of moving on, Disick was also seen with several young women such as Bella Thorne, but that’s another story.

A few months ago, he was in France during the Cannes Film Festival and gloated that he was with a bevy of beauties each day. One of the beauties was Jeffries. They were photographed on a yacht where he got a “handful” of Jeffries. But she refuted the claims that they hooked up in Cannes saying she never dated Disick.

It’s mid-2017 and Ceejay the DJ possibly has a new squeeze. She was spotted on a date with Demi Lovato’s ex, Wilmer Valderrama this July. The pair is reportedly getting very close recently. Whether they are dating or enjoying each other’s company is not known. We’ll just have to wait and see if Wilmer Valderrama is the first actor to join Chantel Jeffries’ list of boyfriends!