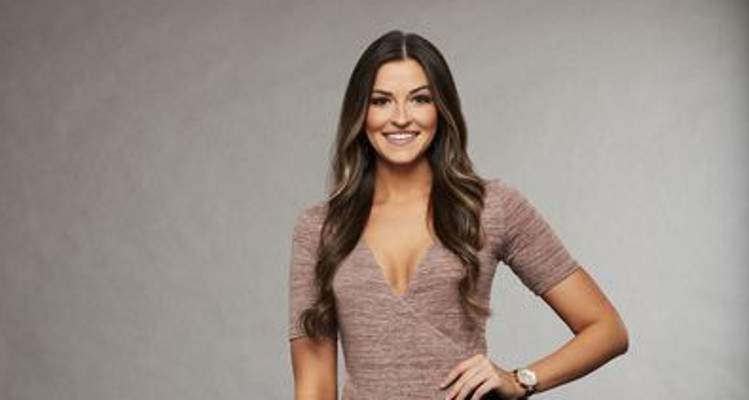 Guess what, Bachelor Nation? Arie picked his final four! While sweet romance was in the air in beautiful Tuscany, last night’s episode threw in some surprises. Jacqueline eliminated herself from the competition, and Arie sent fan-favorite Seinne Fleming home.

Four ladies remain, and brunette beauty Tia is one of the lucky women who are still in the running to win over Arie. Where is Tia from? How old is Tia on The Bachelor? We have everything you need to know about her in our Tia Booth wiki.

Also Read: Who Does Arie Pick on The Bachelor?

She’s from a Small Town in Arkansas

We won’t be surprised if you laugh a little when you hear where Tia is from! She is from a small town called Weiner in Arkansas! (Yes, Weiner.)

Tia shares her Arkansas background with another Bachelor star. Raven Gates, the runner-up on Nick Viall’s season of The Bachelor, who also appeared in season 4 of Bachelor in Paradise, is also from Arkansas, and the two ladies are actually good friends!

Tia Booth’s age is 26, and she is a physical therapist. She loves tattoos. Peace and patience are two of her favorite words, and are both tattooed on her body.

However, don’t be fooled by her sweet appearance! Her favorite fictional character is Scandal’s Olivia Pope, who she describes as a “badass.”

Tia loves to travel and her favorite trip was to Cancun, Mexico. In America, Chicago is on her travel bucket list for its fabulous cuisine.

Memorable Debut on The Bachelor

Tia won over Arie (and us!) with her hilarious introduction on the first night of the show. Fans may remember how she brought along a little wiener as a gift for Arie!

Handing over her gift to Arie, Tia said, “I know you’re gonna have a lot of girls here tonight. And, it’s gonna be hard to keep track of everyone, so I have a little gift. It’s right here. It’s actually a little wiener… um, yeah. Please tell me you don’t already have a little wiener.”

Throughout the show, Tia transformed into this amazing contestant who is a delight to watch! We love her enthusiasm and her openness to try anything! (Also, how can you deny that Southern charm?!)

From attempting to dance during the Moulin Rouge group date (even though she admitted to not being a great dancer!) to giving us some major style goals, this girl is looking like a great match for Arie!

It’s easy to get lost in the crowd of girls clamoring after Arie, but Tia has held her own! She has been forthcoming about her feelings with the race car driver since the start.

On their one-on-one date in the Everglades, Tia admitted that she was falling for Arie, saying, “I’m not trying to be emotional right now … You make me feel good, and like, that this is a mutual thing. And it does kind of feel like a fairy tale.”

Head over to Tia Booth’s Instagram to see pictures of her and Arie. They sure look adorable together!

Monday night saw more drama after Tia told Arie that Bekah M. is too young to be in a serious relationship, or even get married. After a two-on-one date, and spending time with Bekah and Tia separately, the final rose of the date was given to Tia.

Tia has openly expressed from the start that she is ready to settle down and get married. For Tia, marriage is all about “lifelong commitment, passion, happiness, best friend.” Will she find it with Arie? We’ll just have to watch the next few episodes of The Bachelor to find out!