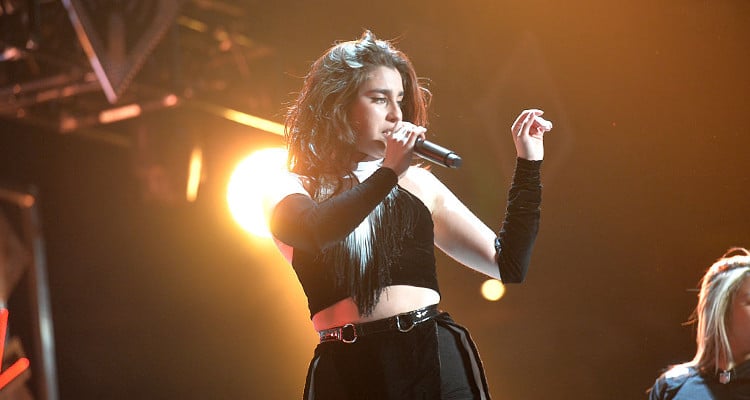 Fifth Harmony’s Lauren Jauregui came out as bisexual in an open letter to President Donald Trump, last year. The latest reports of her dating life claimed the singer was happy with her girlfriend. Are they still together? Who is Lauren Jauregui dating now? We’ve got the scoop!

Last year was quite interesting for Fifth Harmony. The five-member group became a quartet when Camila Cabello quit, much to the sadness of “Harmonizers” everywhere. But before that, fans got another revelation. Lauren Jauregui penned an open letter to Donald Trump and came out as bisexual. Since then, many are wondering who she is dating. Does Lauren Jauregui have a girlfriend in 2017? Here’s a look at her relationship history.

The Men Who Have Dated Lauren Jauregui

The 5H girls auditioned as solo acts for The X Factor, before Simon Cowell and his gift of working with talent formed them into a group he knew would become a sensation. But who would’ve thought that love would also bloom on the X Factor stage? Jauregui was reportedly getting cozy in The X Factor house with Keaton Stromberg, one-third of 5H’s competitors, Emblem 3. But the relationship was doomed from the start, with both wanting to win the $5 million prize. Once the show ended, so did their relationship.

The 20-year-old was later dating a man named Luis Santos and they were dubbed, Lauis. But when pictures of him naked with three bikini-clad women surfaced, Harmonizers were furious. But Jauregui’s mother confirmed that she and Santos had already broken up and the pictures were taken after their relationship ended.

Then, Harmonizers speculated that something was brewing between Jauregui and Brad Simpson from The Vamps. Things seem to have ended amicably until The Vamps dissed Jauregui, prompting backlash from Harmonizers and former 5H member, Camila Cabello.

Lauren Comes out as Bisexual

After the 2016 presidential elections ended, Jauregui penned an open letter directed to the supporters of then President-Elect, Donald Trump. In the letter, she said, “I am a bisexual Cuban-American woman and I am so proud of it!” Harmonizers received the news well and rallied behind the singer. In fact, fans liked to imagine a fictional relationship between Jauregui and Cabello.

Rumors of Jauregui’s sexuality were floating a week before she wrote that letter. It started with a photo of her kissing a girl at a relative’s wedding that went viral. Her captivated four million Instagram followers were anxiously searching for the identity of the girl and found out she was Lucy Vives, the daughter of Grammy Award-winning musician, Carlos Vives from Columbia. They have known each other since high school and reportedly dated on and off for a few years.

Lauren and Lucy Get Close in Photoshoot

Jauregui shared pictures of her much talked-about photoshoot, where she’s rocking a sheer black jumpsuit. She and Vives were affectionately close in the sensual shoot at New Orleans’ Bayou. Malibu-based photographer, Nicole Cartolano shot the photo spread called “Bare with Me.”

“Both girls trusted me to photograph them together as sort of a coming out, but they were nervous how their families would respond and the publicity they’d attract, especially from the Latin American community,” said Cartolano.

The photo spread was shot a few months ago, and Jauregui even sent Vives birthday wishes in January. But some time later, the couple broke up. They’re best friends above all else and still have a good relationship, which is why they were happy to let Cartolano release the photographs. “They agreed, and Lauren said this: ‘that it’s a reminder of a really good moment in time.’ Because at the time, they did really like each other. And it was a very good memory,” added Cartolano. You can check out the rest of the “Bare with Me” shoot on Cartolano’s web site.

As of right now, Lauren Jauregui does not have a boyfriend or girlfriend. Nevertheless, we have no doubt Harmonizers will always have her back no matter who she dates!