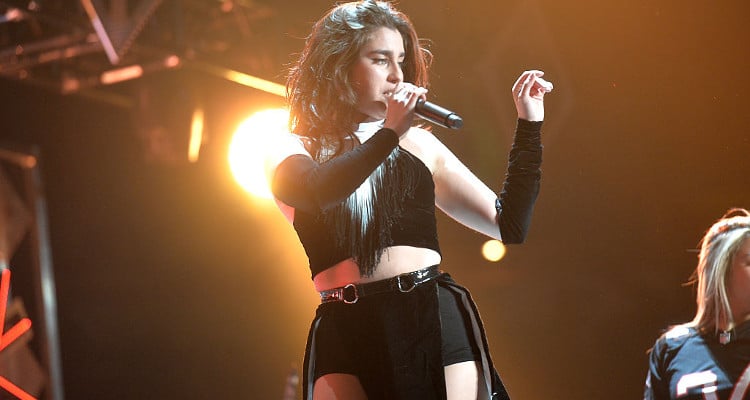 Fifth Harmony may be turning into Fourth Harmony now that Camila Cabello has left the group. The remaining Fifth Harmony members, including Lauren Jauregui, are under the spotlight.

It’s been a bumpy 2016 for Fifth Harmony. Earlier this year, Camila Cabello and Normani Kordei were in a reported feud. Now, Camila Cabello has announced her departure from the group after episodes of fame-related anxiety in the past few months. The group has been the talk of the town for their member’s drama rather than their music. After discord became evident between Lauren Jauregui and Dinah Jane at a red carpet event, Jauregui lashed out at her haters. Just last week, Jauregui was detained at the airport when marijuana was discovered in her luggage. As a result, she missed the group’s Brazil concert for which she apologized. Here is Lauren Jauregui’s wiki including details about the group’s discord.

She Auditioned for The X Factor

In 2012, 16-year-old Jauregui auditioned alone for The X Factor season two, just like the rest of the band’s members. She sang Alicia Keys’ “If I Ain’t Got You” and passed her audition. However, the five participants failed to progress to the judging stage of the competition.

Jauregui and the four other girls got the opportunity to train under Simon Cowell and Demi Lovato in The X Factor’s bootcamp. Through the bootcamp, the five-member girl band qualified to audition as a group. After a spate of name changes, Simon Cowell revealed that viewers would name the group by voting online and ultimately, the five girls were named Fifth Harmony.

Since then, there was no stopping Jauregui and the girls. They placed third in The X Factor but their career as a group had been paved. Cowell signed Fifth Harmony to his label a month after the The X Factor season finale, and they released a debut extended play, chart-topping singles, and two studio albums.

The group earned a grand net worth of $15.0 million. The girls individually also earned well, with Jauregui earning a net worth $3.5 million.

Jauregui was born in Miami to Mike and Clara Jauregui, who have Cuban roots. She also has a brother, Chris Juaregui and a sister, Taylor Jauregui. Lauren Jauregui’s siblings say that she is an inspiration for them, and Jauregui has posted pictures on her Instagram with her entire family. She is the eldest child at 19 years old, her brother is 17, and her sister is 15.

Jauregui has been romantically linked to One Direction member Louis Tomlinson, and Vamps frontman Brad Simpson. However, the rumors remained just that, rumors. Lauren Jauregui came out as bisexual in November 2016.

Through social media and a post on Billboard, Jauregui penned an open letter to President-Elect Trump’s supporters, saying “I am a bisexual Cuban-American woman and I am so proud of it.” Read Jauregui’s entire scathing open letter on Billboard here.

Fifth Harmony has been facing a lot of disharmony over the past year. Besides Cabello’s anxiety, both Jauregui and Dinah Jane Hansen became the subject of controversy after a red carpet event.

At a red carpet photo op last year, Jauregui asked Hansen to switch spots with her, presumably for a better photo angle. But Hansen refused, which resulted in Jauregui bursting out into tears on the spot. In the end, Jauregui managed to stand and pose for the cameras the way she wanted to. However, the incident that was caught on camera became a hot topic on social media.

Internet trolls mercilessly criticized Jauregui on Tumblr, saying that it reached Jauregui’s saturation point. Jauregui silenced critics with her own Tumblr post saying “F**k all of you, I felt insecure…and it stressed me out because I was stressing out…y’all don’t know what it’s like to not feel your best and have pictures taken that you don’t feel good in splattered everywhere for people like you to make fun of me anyway. Still a person!”

Jauregui may have silenced the trolls but the incident brought to light the discord between Fifth Harmony members. All five girls have cited burdening schedules and excessive fame as taking a toll on them. Camila Cabello’s departure from Fifth Harmony, though a shock, is not entirely surprising to many who’ve been speculating discord among members.