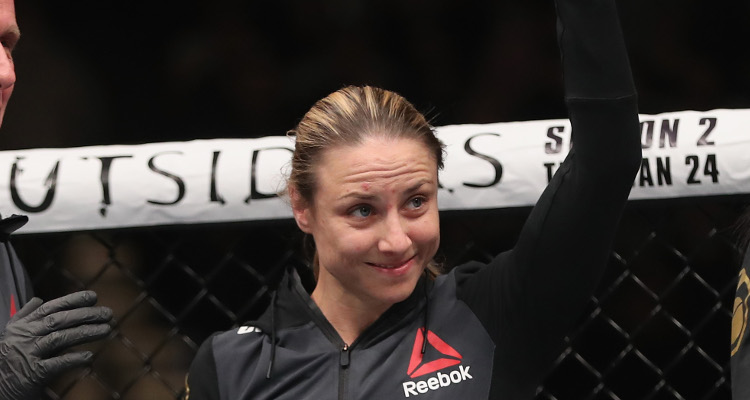 Nina Ansaroff is back in the UFC thanks to the unflagging support and encouragement of her girlfriend and fellow UFC fighter, Amanda Nunes. Now, Ansaroff is determined to fight and win a championship belt. At the same time, nothing is more precious to Ansaroff than her loving relationship with Nunes.

Nina Ansaroff is a Macedonian-American mixed martial artist, who currently competes in the women’s strawweight division of the Ultimate Fighting Championship (UFC). Though her name fame comes from her career as a UFC fighter, she seems to be getting more attention lately as Amanda Nunes’ girlfriend. Ansaroff has been plagued by injuries recently, but Nunes has been encouraging her to get back into the ring and win her fights. Amanda Nunes is no stranger to the ringer herself, as she is the women’s bantamweight champion of the Ultimate Fighting Championship (UFC). The close relationship between Ansaroff and Nunes has been the subject of buzz in the media, but their support for each other has helped get them through troubled times.

Inspired by Her Girlfriend

Ansaroff was unable to participate for two year-long periods within a three-year span, and she was painfully aware that she was slipping into obscurity. However, her girlfriend made sure that fans did not forget Ansaroff, even during the times when she was unable to fight. So, after a recent win over fellow strawweight, Jocelyn Jones-Lybarger, Ansaroff made it clear that she was grateful to Nunes for inspiring her to win. Ansaroff said, “Man, for her last three fights, she’s called me out, telling everybody that I’m the next champion. It’s a little bit of pressure, but she believes in me. I know what I’m capable of. She does too. And it only motivated me to get the win tonight.”

She Fights Hard for the Money

Ansaroff was born and raised in Weston, Florida and is of Macedonian descent. Ansaroff, who is 31 years of age, is inspired by Nunes’ success and wants to have a busy 2017 campaign. Ansaroff says that if all goes well, she will soon be fighting for a belt of her own. She took to martial arts from a young age and started practicing Taekwondo at the age of six. She began training in mixed martial arts in 2009 so that she could lose weight and keep in shape after having a motorcycle accident. Ansaroff made her professional debut in 2010 and notched up a record of 5-3, before joining Invicta FC. Nina Ansaroff’s net worth is not known, but she currently gets a salary of $33,000 for each fight.

The Two Lovers are Practically Inseparable

When asked about how she was preparing for her future fights, Ansaroff said: “I want to go back to the gym and fix a couple of things that I feel like I had mistakes with, and finish fights and keep going until I get to the top.” Nina Ansaroff was born on December 3, 1985, which makes her age just 31. She has been quite open about her relationship with Amanda Nunes, a fact that is obvious if you’ve seen Ansaroff’s Instagram account. Ansaroff’s Instagram account is full of pictures of herself and Nunes, Ansaroff with friends and family, and photos of male fighters, as well. It is obvious that Ansaroff and Nunes’ relationship is very strong and is a great source of strength for both of them.

Fighting Pressure is the Hardest Part

I found these! #farm #brazil #eggs

Nina Ansaroff is fighting hard to become a champion and win a belt. She is also fighting to keep her relationship with Amanda Nunes safe from the pressures of her profession, the media, and societal disapproval. In both her professional and personal life, Ansaroff has the mark of a champion.