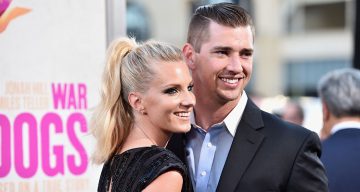 Glee alum, Heather Morris is tearing up the ballroom floor on Dancing with the Stars season 24! And we definitely know of at least one big cheerleader in the audience; her hubby! Taylor Hubbell is Heather Morris’ husband and her biggest supporter. We’ve got all you need to know about him, right here!

Heather Morris is putting her dance skills to good use on Dancing with the Stars. Though she’s performing well, she hit a glitch when her pro-partner, Maksim Chmerkovskiy was out with an injury on Monday night. She’s now partnered with Alan Bersten, a troupe dancer on DWTS. While Morris was one of the top scorers of the night, she was probably pretty nervous. But we’re sure she got all the support she needed from her husband and children. Outside of the ballroom, Taylor Hubbell is the Glee star’s partner in life. Here’s everything to know about him in Taylor Hubbell’s wiki.

#1. They Went to the Same High School

Morris was born in California and raised in Scottsdale, Arizona, where she went to the same high school as Hubbell. Before you start thinking that they were high school sweethearts, we’ll let you know they actually never knew each other at that time! Morris moved to California to pursue her acting career, and Hubbell went to college in Louisiana.

But they did date online before dating apps were a thing. Morris moved to LA for her career so Hubbell connected with her on MySpace. (Who remembers the days of MySpace?) and they hit it off. Hubbell began dating Morris and he moved in with her after graduating college.

Also Read: David Ross Wiki: Everything You Need to Know

#2. He Played Baseball in College

Hubbell studied political science and government at the University of Louisiana at Lafayette. While still in college, he played baseball for the Louisiana Ragin’ Cajuns. His LinkedIn profile lists his many jobs related to golf, so we think it’s safe to say that he has a passion for the sport. He worked as an assistant golf professional at the Wood Ranch Golf Club from 2012 to 2015, as well as was the tournament director and membership director for the American Golf Corporation.

He is currently the director of membership and marketing at the North Ranch Country Club. His net worth is not known, while Morris has as estimated net worth of $4 million. Hubbell stays home with the kids while Morris puts her dancing and acting skills to good use. But she said she’d happily give up her career to be with him.

“I want to marry him so bad. That’s what I really care about. I want to marry Taylor and have kids with him. I love acting, but if it affects my relationship, then I won’t continue doing it.” The two obviously got their happily ever after and have been giving #relationshipgoals to couples ever since. Cue the “awwws!”

The former baseball player moved into Morris’ apartment in 2012. In 2013, it was revealed that Morris and Hubbell would be expecting their first child. She was 26 at the time and filming Glee’s season 4 finale while three months pregnant. The show did some nifty concealing of the baby bump with wardrobe styling and camera angles. They also altered the storyline to give her a break during season 5, allowing her to appear in few episodes of seasons 5 and 6.

She gave birth to their son, Elijah Beckwith Hubbell, in September 2013. They named him after Taylor Hubbell’s cousin, Elijah. The following year, the couple was engaged. They tied the knot in May 2015, which was a massive reunion with the Glee cast. She announced on Instagram that she was expecting their second bundle of joy that same year. Owen Barlett Hubbell was born in February 2016, and a year after his birth, his mommy is already back on the dance floor!

Also Read: Nancy Kerrigan Wiki: Everything You Need to Know

Hubbell is active on Instagram where he’s got over 5k followers, while Morris has a Instagram following of more than 350k. The couple loves posting about their kids on Instagram and from Hubbell’s posts, we deduce he’s a romantic and family oriented guy. And he’s also promoting #TeamMaksimumHeat!

When he’s not posting pictures of his cute baby boys and tagging his wife, Hubbell is posting Pinterest-level pictures of furniture he’s made himself. Yup, the man is a genius carpenter! He builds beds and works on house projects in his downtime, and he’s extremely good at it. He made a life-size growth chart for his niece and another one when they were expecting Owen. We predict his kids will have a pretty swanky tree house when they’re older!

Taylor Hubbell is so good at what he does, he should be getting a call from The Property Brothers! One fan also tweeted that he and Morris should get their own home fixer-upper show and he responded saying, “I love this idea!” We’d certainly watch the show, especially with cameos from Morris!

Dancing with the Stars season 24 airs every Monday at 8:00 p.m. EST only on ABC.