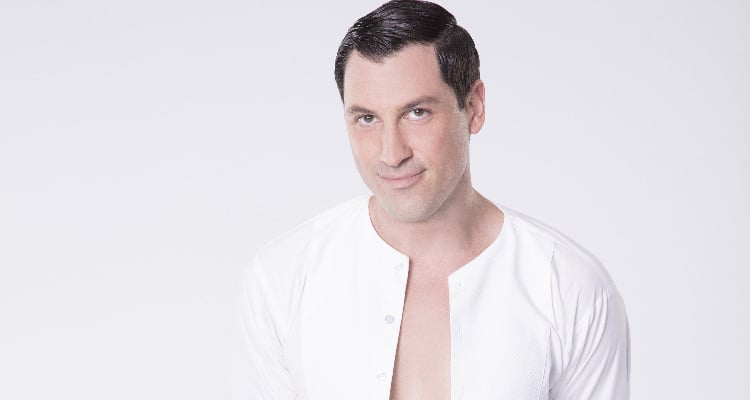 Heather Morris and Maksim Chmerkovskiy are a part of the Dancing with the Stars cast for season 24. The former Glee actress and a backup dancer for Beyoncé is partnered with professional dancer, Maksim Chmerkovskiy. The two performed the Viennese Waltz during the season premiere on Monday (March 20), scoring an impressive 28 out of 40.

However, it was just revealed that Morris will be without her famous dancing partner this week, as he has suffered an injury and will be unable to dance for tonight’s show. His injury was revealed earlier today on Good Morning America, where it was also announced that Chmerkovskiy would have a fill-in for tonight, if not longer. “It’s my calf muscle,” Chmerkovskiy said in rehearsal footage. “F—k. It just feels like something hit it.” Dancing in Chmerkovskiy’s place tonight will be Alan Bersten. Fans are hoping his calf injury heals quickly!

Although many people feel that Heather has an advantage on DWTS as she has a dance background, judge Julianne Hough defended her by saying that ballroom dancing is very tough and Heather would have to learn a whole new skill set for the show.

Heather plans to make her mark on the dance floor in season 24 of Dancing with the Stars, with the hope of winning the Mirrorball Trophy. With Maksim Chmerkovskiy by her side, it looks like she may have a real shot! But what do we know about Maksim Chmerkovskiy, other than the fact that he’s a brilliant dancer? We have all the information you need to know about the Ukrainian-American dancer, including information on his early life, family, girlfriend, baby, and career.

Also Read: Heather Morris and Maksim Chmerkovskiy on “Dancing with the Stars” 2017: 3 Facts to Know

Maksim Aleksandrovich Chmerkovskiy was born January 17, 1980, in Odessa, Ukrainian SSR, Soviet Union, but spent much of his life in Brooklyn, New York. He is a Latin ballroom dance champion and is often referred to as “the bad boy of the ballroom.” Additionally, Maksim has a good track record on the show, winning its 18th season with American ice dancer, Meryl Davis!

From a very young age, Maksim wanted to learn the art of dancing. At the age of four, his parents enrolled him in a school of aesthetic education. There, he learned ballroom dance and eventually started competing in ten-dance, which incorporates ballroom and Latin styles. At the age of 13, Maksim broke his right leg in a skiing accident and had a titanium rod put in to stabilize his leg. His doctors were not sure if he could continue dancing, however, Maksim recovered in six months.

Also Read: Nick Viall’s Wiki: 5 Juicy Facts about the Reality Star’s Journey from “The Bachelor” to “Dancing with the Stars!”

Maksim’s brother Valentin was born in 1986. Like his brother, Val also has a promising career in dance and is competing against Maksim’s on theseason 24 of Dancing with the Stars. The brothers first appeared in season 2 and have been on the show now for a total of 12 seasons. Their family moved to the U.S. in 1994, and in 1996, the brothers opened their own dance studio in New Jersey.

Maksim Chmerkovskiy’s net worth is estimated to be $3.0 million. He taught and performed for many years in the U.S., but has found fame for his work on Dancing with the Stars.

Happy V-Day to my absolute number one ❤️ Thank you, I love you and I'm in love with us… #Family #babyChmerkovskiy #HappyValentinesDay

In 2009, Maksim was engaged to DWTS partner Karina Smirnoff for nine months. Three years later, Maksim started dating another Dancing with the Stars professional dancer, Peta Murgatroyd. However, their relationship lasted only for ten months before their split in 2013. In 2014, Maksim and Peta got back together and were engaged in 2015 while on-stage for a performance of Sway: A Dance Trilogy in Miami, Florida. Maksim and Peta’s son, Shai Aleksander, was born on January 4, 2017.

Maksim Chmerkovskiy and Heather Morris have a good chance of winning the Mirrorball Trophy on this season of DWTS, considering both of them have an impressive dance background. Do not forget to watch Dancing with the Stars Monday nights at 8:00 p.m. only on ABC.