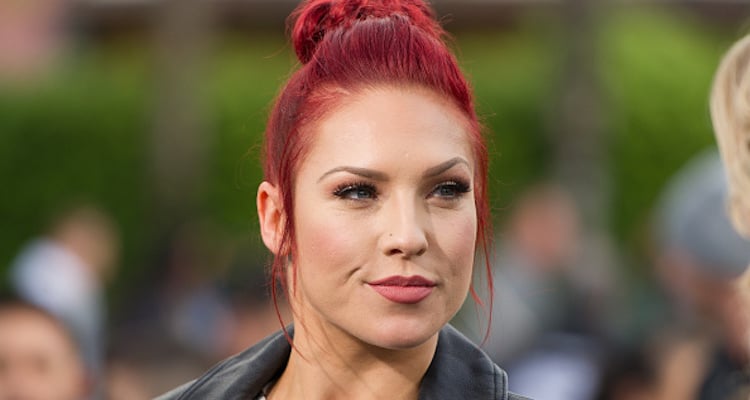 When it comes to Sharna Burgess on Dancing with the Stars, all anyone can talk about is her perceived romance with her dance partner, model, and bull rider Bonner Bolton. Bolton’s misplaced hands have given his dance partner a lot of attention on the show and now everyone wants a look at Sharna Burgess‘ hot pics. So, if you’ve been looking for a few more photos, then have a look at our collection of her hottest pics.

After fogging up our TVs with their steamy scenes on the dance floor, Burgess and Bolton are telling fans that it’s all an act.

“It’s all a part of playing the character, for sure,” Bonner admitted, chalking up those sparks flying to good old fashioned faking. “You’ve got to practice your acting skills.”

“Which we practiced a lot this week,” Sharna added. “We talked a lot about breaking down characters and bringing across a tormented romance that was a little bit one-sided. It’s all about acting at the same time as dancing. If people feel like maybe we were having a romantic relationship, then we did our job in our dance, right?”

Burgess and Bolton first got our attention when his hands made a trip down under—and we don’t mean Australia. From that moment #Handgate was born and Burgess took to Twitter to deny any romance with her dance partner.

“It was kind of an intense week,” she said, reflecting on #Handgate. “On the bright side, our cha cha has over a million hits on YouTube, which is a record for us, I think, in the first week of Dancing with the Stars. And everybody got to know Bonner and now I’m sure everyone understands that he is a total Southern gentleman and something got blown way out of proportion.”

“100 percent,” Bonner agreed. “I have all the respect in the world for her, on and off the dance floor. She’s a great instructor.”

So far, fans and viewers aren’t buying their story, while others believe it to be a publicity stunt to gain more viewers for this season. But whether you believe them or not, here are the hottest pics you need to see.

I say, It’s the fire in my eyes, And the flash of my teeth, The swing in my waist, And the joy in my feet. I’m a woman Phenomenally. Phenomenal woman, That’s me. ~ Maya Angelou And remember that’s YOU too #loveyouloverz ????❤️

Out of the many Instagram pics that Burgess has of herself, this is one of the most recent ones that stand out! Not only does she know how to rock that cream dress and curly hair, we also love the quote by Maya Angelou.

Watch: Kym Herjavec Instagram: 20 of the Hottest Pics You Need to See

You can’t go wrong with a red dress, especially if you’re red from head to toe!

A Night on the Town

Out of all of Sharna Burgess’ sexy pics, this has to be one of our favorites! Whether you have a tattoo or not, you can’t go wrong with this Lexi little black dress and some leg.

Watch: Simone Biles’ Instagram: 20 of the Hottest Pics You Need to See

All that glitter! Burgess looks stunning in this sparkling dress and looked like she was floating on air.

Burgess looks like she was having fun in this bikini pic, during an old photoshoot.