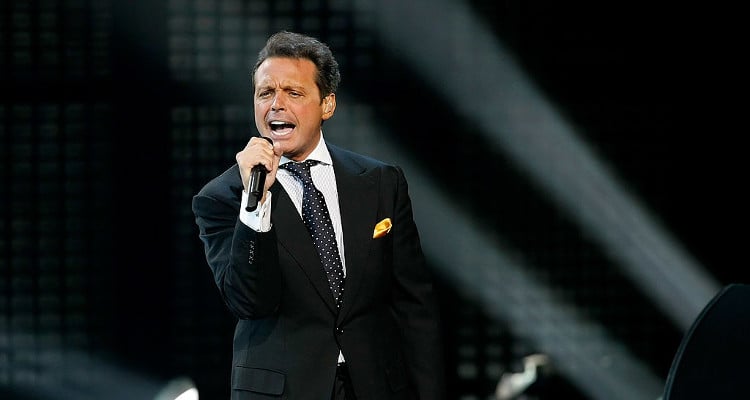 Grammy-winning musician, Luis Miguel was arrested over a pay dispute yesterday. The Mexican singer, who had a high profile relationship with Mariah Carey, has a net worth of $45.0 million.

Latin American music icon, Luis Miguel is famous for his music, not to mention the fame he gained for dating Mariah Carey. Adding to his infamy is his recent arrest in Los Angeles. The singer surrendered to U.S. Marshalls, after an arrest warrant had been issued against him for failing to appear at previous hearings. His net worth of $45.0 million is probably going to take a hit with this case. Here are more details on the issue in Luis Miguel’s net worth.

How Rich is Luis Miguel?

By enthralling Latin America with his music, Luis Miguel has earned himself a net worth of $45.0 million. He earned the moniker “The Sun of Mexico” with his music career that began in 1981. He was the first Latino artist to have two Spanish-language albums, Romance and Segundo Romance, go platinum in the U.S.

The singer-songwriter has won five Grammy awards in his career, the first of which was when he was only 14. His song, “Me Gustas Tal Como Eres” with Sheena Easton was a Grammy-winner, and he is the third youngest artist in music history to win the accolade.

He broke his own record of the highest-grossing Latin artist with his 1999 tour, Amarte Es un Placer. His self-titled 2010 album achieved gold and platinum status in four countries within three days of its release. He sold out the National Auditorium of Mexico City 230 times in 20 years. The 47-year-old annually headlines a concert at Caesar’s Palace in Las Vegas. He visited 22 countries in North America, South America, and Europe with his most recent tour, which holds the title for the longest and highest-grossing tour ever made by a Latin American artist.

The artist, whose real name is Luis Miguel Gallego Basteri, is lacking information about his early life. His father, Luisito Rey was a musician and his mother was Italian actress, Marcela Basteri. Miguel has two younger brothers. His music career began when he was very young with his father acting as his manager. Luisito Rey encouraged his son to watch and analyze every one of Elvis Presley’s works in order to embody him.

At 11 years old, Miguel released his first album, Un Sol under the Mexican branch of EMI Records. After several music releases, he dropped the album, Busca Una Mujer in 1988. The first single from the album became a hit in Latin America, thanks to its sensational music video where Miguel chopped off his signature long hair. This marked his transition from a child artist to a legitimate showman. His subsequent albums turned him into an internationally famous artist.

While he was enjoying professional success, Miguel’s family life was anything but ideal. He had a strained relationship with his overbearing father/manager. He ultimately fired his dad as his manager when he created financial problems for Miguel. In 1986, his mother mysteriously disappeared and her whereabouts are still unknown. Soon after, his father fell into depression, began heavily drinking and passed away.

Miguel is fluent in four languages: English, Portuguese, Italian, and Spanish. He’s also recognized for his taste in haute cuisine and for being a self-taught sommelier. He released his own collection of vintage wine, among other business ventures.

The Many Romances of Miguel

Luis Miguel is quite a ladies man. He dated many Latin American celebrities and a few Hollywood A-listers, as well. Some of Miguel’s ladies include Modern Family’s, Sofia Vergara and MTV comedienne, Daisy Fuentes. But none of his relationships were as high profile as what he had with Mariah Carey.

They met at a ski-trip in Aspen and hit it off immediately. They were together for three years before things began to crumble. Carey had a very public meltdown, which made her seek psychiatric help. We later learned their relationship had ended and she was suffering from a bout of depression. Added to her stress, was her poor album sales at the time. But after a brief retirement, she bounced back and revamped her career. Her love life is still bumpy though.

Miguel dated Stephanie Salas ages ago. She’s a Mexican singer-actress, who came from the most prestigious showbiz families in Mexico. They have a daughter, Michelle Salas, who is 27 years old.

He also dated Aracely Arambula, another Mexican actress. They have two sons, Miguel, 10, and Daniel, 8. Arambula claims Miguel is a deadbeat dad. His relationships are widely covered by the Latin media, but his current romance is not known.

The international artist is facing a legal battle for a breach of contract lawsuit involving his former manager, William Brockhaus. After he failed to appear in court for the third time, a federal judge in LA held him in contempt and issued an arrest warrant against Miguel on April 17.

Following that, Miguel turned himself in and was taken into custody by the U.S. Marshal’s office on Tuesday (May 2). He spent some time in the downtown courthouse, but won’t be going to jail and has since been released. Miguel has no attorney listed in this case to make any official comment, but considering he tends to stay away from the media frenzy, he might not want to publicize the matter.

Brockhaus had filed a suit against Miguel, claiming that the singer had not paid him according to their managerial contract. Luis Miguel refused to accept court summons to determine his ability to pay. He was ordered to pay the talent manager more than $1.0 million in July 2016 by a federal judge in New York. In January, he was ordered to turn over a 2013 Rolls Royce to help satisfy the judgment.

Miguel is undoubtedly going through a rough patch. He has canceled concerts in recent years for undisclosed reasons. His collaborators have also filed a suit against him for canceling concerts.