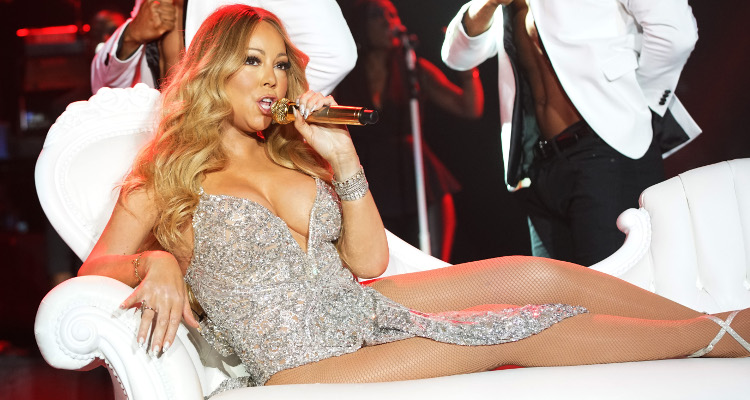 Mariah Carey is the ultimate diva. The 46-year-old songstress recently posted a photo on Instagram, in which she ends a phone conversation and makes a face in disbelief.

Nobody does it like Mariah Carey. The five-time Grammy-winner has taken on a new role of teaching women everywhere how to get over a breakup. Carey called off her engagement to Australian billionaire, James Packer last October, and since then has been making headlines everywhere. Carey’s name was splashed across magazines after rumors broke out that she had cheated on her fiancé, and that she was embroiled in a love triangle with her former backup dancer, Bryan Tanaka. After the debut of her reality show, Mariah’s World in December, Carey made front page news once again following her disastrous performance during Dick Clark’s New Year’s Rockin’ Eve. The “We Belong Together” singer recently dropped her brand new single, “I Don’t” featuring rapper YG, that is heavily based on her broken engagement to Packer. As part of promoting her ultimate payback song, Mariah Carey’s Instagram showcased a new video captioned with the title of her new single. Check out Mariah Carey’s pics and Mariah Carey’s new song right here.

Mariah Carey’s new track “I Don’t” has been making waves after it came to light that Carey burned a $250,000 Valentino dress in the now-famous music video. “I Don’t” has become the anthem of heartbroken singles everywhere as Carey croons lyrics like, “You messed up all we had,” and “I used to love you but I don’t.”

As part of the promotions for “I Don’t,” Carey recently shared an Instagram video that seems to be shot in the comfort of her home office. In the video, Carey is seen lounging at her desk as she puts her phone to her ear to answer a call, but makes a face as she checks the screen. The “Touch My Body” singer captioned the video, “#idont … think so muthafu&@as 😉 !!” and since it was posted an hour ago, the amusing video has already received over 88,000 views and counting!