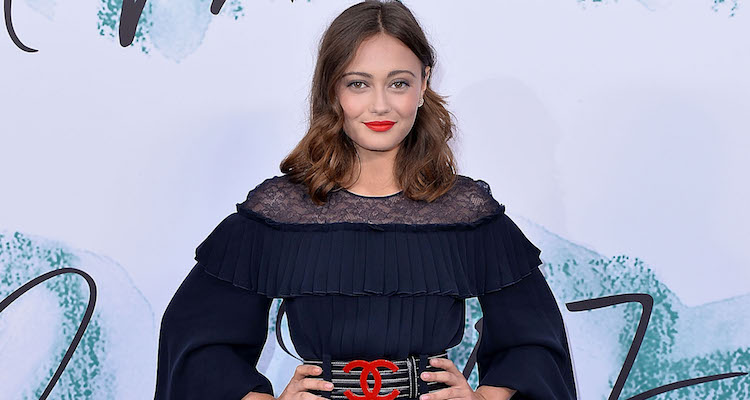 Since his split with Angelina Jolie last year, details about who Brad Pitt’s girlfriend in 2017 have been scarce. The couple’s highly publicized divorce made headlines for months, as new information surfaced, and old information was debunked. Word on the street is that Brad Pitt might have a new girlfriend. We have the details in Ella Purnell’s wiki.

Model and actress Ella Purnell is a rising star who hit the ground running with films like Never Let Me Go (2010), Kick-Ass 2 (2013), and Maleficent (2014) —yes, the film that starred Angelina Jolie, and featured her daughter, Vivienne. Though the rumors haven’t been confirmed, people are buzzing that Brad Pitt’s new girlfriend in 2017 is none other than the 21-year-old who recently signed on to play the lead role in the upcoming show, Sweetbitter. The 53-year-old reportedly “jumped at the chance to work with Ella when his production company, Plan B, began to develop the drama, based on a novel about a NYC waitress.” Our Ella Purnell wiki has more about the young actress and her rumored relationship.

She Worked with Brad Pitt’s Ex

Born and raised in London, England, Purnell was raised by her mother, though reportedly has a good relationship with her three half-brothers from her father. While at City of London School for Girls, she took weekly acting, singing, and dance classes at Sylvia Young Theatre School. From there, she went on to make her theater debut in Oliver! as part of the children’s ensemble. By the end of her year-long stint, she had a role in the film Never Let Me Go, opposite stars like Carey Mulligan, Andrew Garfield, and Keira Knightley.

Continuing to work in both independent and feature films, Ella Purnell, age 21, appeared in the Disney hit, Maleficent. Not only did she get to work alongside Angelina Jolie, she actually played the teenage version of dark and powerful fairy. Ella Purnell’s movies only continued to do well, with her role in Churchill listed as part of the reason Pitt “went out of his way” to cast her as Tess in Sweetbitter.

Behind the scenes #ChanelNeapolis #ss2028 @chanelofficial

The 21-year-old recently signed on for Starz’s TV adaptation of Stephanie Danler’s hit book, Sweetbitter, produced by Plan B. Entertainment, which Pitt helped found. Though neither star have confirmed their relationship status, he has reportedly “been checking in with Ella weekly as she preps for production,” and “plans on coaching Ella for the show. He’s sure it’s going to be a hit and that it’s going to make Ella a star.” Jolie, on the other hand, is allegedly “furious about Brad’s interest in Ella and her being cast in Sweetbitter,” with the same source adding, “She absolutely hates that Brad is cavorting with someone who played the teenage version of her in a film.” Despite the fact that they’re 32 years apart, it’s assumed to be “only a matter of time before Brad takes their relationship to the next level.”

Little jam with my main man from a while back x excuse the bum notes we were making it up n havin fun n fuck it we all learning x happy Tuesday ✌?❤️?

Career-wise, Ella Purnell’s hot! Pics of her dyed blonde locks were all over posters for Miss Peregrine’s Home for Peculiar Children, making some fans okay with the fact that her character in the film couldn’t conjure fire as she did in the book. Though it’s too soon to say if she’s actually Brad Pitt’s new girlfriend, there’s no denying the success of her career. To stay up-to-date with the actress and have a behind-the-scenes look at her upcoming roles, take a look at Ella Purnell’s Instagram.