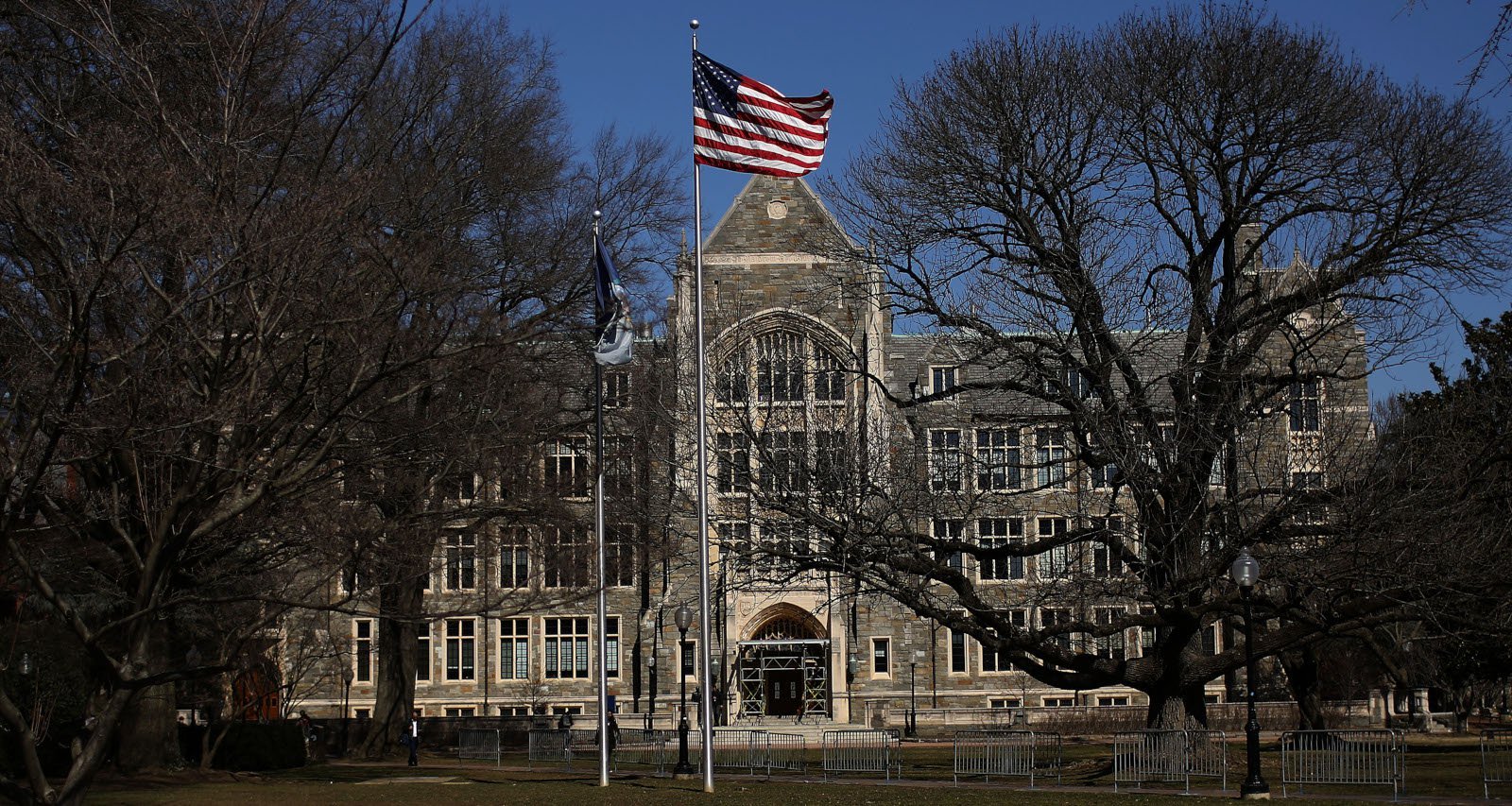 The campus of Georgetown University in Washington, DC. Georgetown University and several other schools including Yale, Stanford, the University of Texas, University of Southern California and UCLA were named today in an FBI investigation targeting 50 people as part of a bribery scheme to accept students with lower test scores into some of the leading universities across the United States. (Photo by Win McNamee/Getty Images)

The 2019 college bribery scandal saw dozens of parents charged for their involvement, including celebrity moms Lori Loughlin and Felicity Huffman. Elisabeth Kimmel is a media mogul who allegedly cheated her children’s way into elite colleges. Who is this pay-for-play accused, and what is her connection to late-night show host, Jimmy Kimmel? Find out right here, in Elisabeth Kimmel’s wiki.

Las Vegas native Elisabeth Meyer Kimmel was born in 1964. She and her husband, Gregory Kimmel, divide their time between their La Jolla residence in San Diego and a Las Vegas penthouse they purchased in 2018.

Elisabeth acquired a BA in history from Stanford and Juris Doctor from Harvard Law School. She also worked as an attorney for three years at the L.A.-based firm Mitchell Silberberg & Knupp.

However, for the majority of her career, she has been a media executive as owner and operator of San Diego-based Midwest Television Inc., which was a co-parent company of the CBS/CW San Diego affiliate, KFMB-TV.

Elisabeth’s grandfather, August C. Meyer Sr., founded Midwest Television in 1952. He brought CBS-affiliate stations WCIA-TV in Champaign, Illinois; WMBD-TV, WMBD-AM, and WKZW-FM radio in Peoria; and KFMB television and radio stations in San Diego under Midwest’s wing. August Meyer passed away in 1991 at the age of 91.

Elisabeth took over for her father at Midwest in 1993 as president and general counsel. TEGNA acquired KFMB-TV in 2017 for over $300.0 million.

Kimmel’s role at Midwest remains unclear in the days since her involvement in the college bribery scandal came to the fore. She’s still the third-generation owner of Midwest but no longer owns KFMB-TV as of the TEGNA deal in 2017.

Since her name came up in the college admissions scam, there’s been plenty of interest in Elisabeth Kimmel, and particularly her supposed relation with another celebrity Kimmel. The Internet is curious if there’s a connection between the disgraced media mogul and the late-night show host, Jimmy Kimmel.

Jimmy was born in Brooklyn, New York and grew up in Las Vegas. Most of his family works with him on the show, including his eldest son Kevin, who’s a production assistant on Jimmy Kimmel Live.

If his supposed relative was involved in the scam, Jimmy Kimmel wouldn’t have been as likely to poke fun at the parents charged in this con the way he did on Jimmy Kimmel Live.

Her Husband Gregory Kimmel Is an Attorney

Elisabeth Meyer’s husband Gregory Kimmel is a San Diego-based attorney, and together, they are parents to three children. Of their three kids, their son, Thomas, and a daughter, Katherine (not to be confused with Jimmy Kimmel’s older daughter and artist, Katherine), are embroiled in the college entrance scandal.

Gregory Kimmel was a prosecutor based in San Diego. Both Gregory and Elisabeth were members of the State Bar of California. However, they are now inactive.

Gregory Kimmel has a bachelor’s degree in political science and French, with a minor in economics from the University of South Dakota. He later acquired his Juris Doctor from the USC Law School in 1990.

Gregory Kimmel has not been charged in the admissions scam. He is, however, prominently mentioned in the court documents.

Federal authorities busted a nationwide scam in March 2019 that allegedly saw dozens of parents bribing and cheating their children’s way into prestigious colleges. The accused ringleader is William Rick Singer, who federal prosecutors say facilitated cheating on SATs and ACTs and also made up athletic credentials for the college applicants.

According to court documents, Elisabeth paid $275,000 in bribes to get her daughter Katherine into Georgetown University (another accused, Manuel Henriquez’s daughter is a junior at Georgetown.)

Singer allegedly fabricated Katherine’s athletic credentials by making her appear as a top ranked tennis player despite her never having played the sport. The affidavit states he even facilitated the bribery of former Georgetown tennis coach Gordie Ernst to misrepresent her playing records to school admission officials.

Katherine was a decorated field hockey player before attending Georgetown. She never played tennis during her time at Georgetown before graduating in 2017. She currently works at a private equity firm in Illinois.

After seemingly getting away with it the first time, the feds claim, Elisabeth enlisted Singer to get her son Thomas into USC. For that, she allegedly paid $250,000 towards Singer’s Key Worldwide Organization, a non-profit that was the front through which he facilitated the bribery, according to the complaint.

Singer and the Kimmels allegedly faked Thomas Kimmel’s athletic records to get him into USC as a track and field recruit. They falsely claimed Thomas was a champion pole-vaulter, even Photoshopping a stock photo image with Thomas’ face, documents say.

Katherine and Thomas were reportedly unaware of their parents’ criminal activity. In fact, when Thomas first arrived at USC, he was confused by an invite to track practice. He brushed it off as a mistake then but now realizes why he was sought for the track and field team.

Elisabeth Kimmel was arrested at her home in La Jolla and charged with conspiracy to commit mail fraud and honest services mail fraud. She was expected to appear in court in San Diego. However, she is now scheduled to appear in a Boston, Massachusetts court, where the federal investigation originated.

Thomas’s future at USC is currently unsure. USC is conducting a case-by-case investigation internally and will then make a decision on students enrolled through Singer’s alleged scam.

After being charged, Elisabeth Kimmel resigned from her position on the Illinois-based financial group First Busey Corporation’s board of directors.