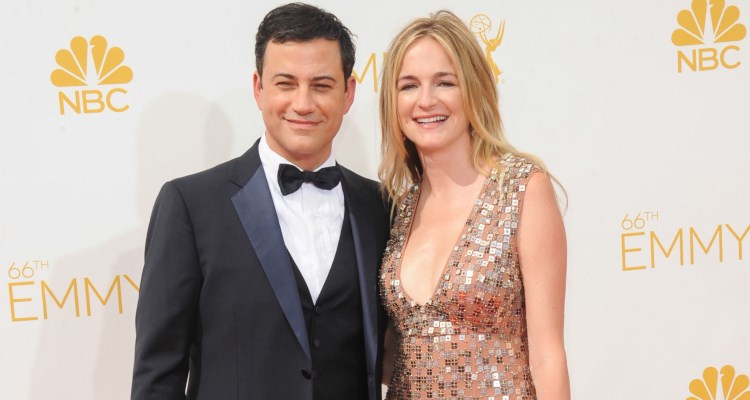 She Works on His Show

In what has to be unconventional, even for celebrities, Jimmy Kimmel and wife Molly McNearney met at the workplace, where he is actually her boss! Molly McNearney is currently the co-head writer for Jimmy Kimmel Live! having worked up from starting out as a writer’s assistant in 2004 and then promoted in 2008. The couple started dating in 2009, in case you were wondering if there was any chance that the promotion was not actually earned. Two things about her position stand out aside from her marriage to the show’s host: one is that she is the writing staff’s only female (or was as of 2012) and the other is that she and the rest of the writing team are in a different building than her husband, which, while out of the ordinary, says helps with her concentration.

Their First Interaction Was Him Insulting Her

In an interview with Glamour Magazine, Molly McNearney revealed that the first words her new boss and future spouse said to her were actually quite insulting. Having started as an assistant, Molly McNearney was introduced to Jimmy Kimmel by her direct superior (the executive producer) shortly after she was hired. Kimmel was barely paying any attention to the introduction until the producer added that McNearney competed in triathlons, which caused him to say, “That is really stupid! What a waste of time.” And what’s worse is that those words were likely the only ones Kimmel said to her during her entire first year employed at Jimmy Kimmel Live!. What do you want to bet that he really regrets that interaction now?

She Was a Rebound

Kimmel would admit that Molly McNearney was his first serious relationship after dating comedian Sarah Silverman for five years. The pair splitting for good in 2009 but stayed friends because they still cared about each other. Despite knowing that Silverman was the woman who came before her, McNearney is actually a huge fan of Silverman, calling her, “incredibly funny and talented.” In fact, she is perfectly fine with her husband and his ex staying friends. It was actually McNearney who campaigned for Silverman to return to Jimmy Kimmel Live! despite worries that having her on may have been awkward.

Jimmy Kimmel proposed to Molly McNearney in 2012 during a vacation in South Africa, specifically at Kruger National Forest while the two were in the middle of a safari tour. They married about a year later, and the ceremony featured many of Hollywood’s finest. It was likely a very fancy affair given that Jimmy Kimmel’s net worth is $35 million. The pair have one child together, Jane Kimmel, who was born in 2014. There’s no word on if she has a relationship with Jimmy Kimmel’s two kids from his previous marriage to Gina Maddy, as McNearney is Jimmy Kimmel’s second wife. McNearney likes to jokingly refer to her husband as a, “great wife,” because of all the work he puts into making her happy. For example, he researches recipes of her favorite foods so he can make her every single one of them! When they were dating, he also made sure she had two of all her makeup products and other necessities at his home before she moved in, so that she didn’t have to keep lugging things back and forth from her place to his. -And girls, you all know how considerate that truly is!

If you want to see more adorable things that Jimmy Kimmel has done, check out this article on how he made his official Facebook debut, using the cutest photo of his daughter, Jane! Check it out here!