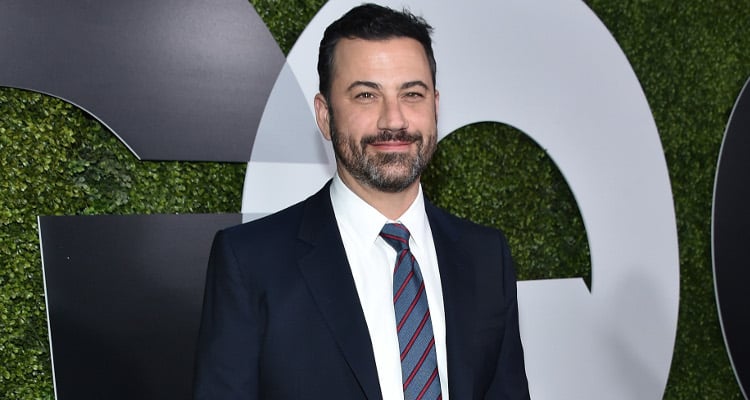 Jimmy Kimmel will host the 89th Academy Awards tonight (February 26). The same day ABC revealed that he would host the Oscars, Jimmy Kimmel and his wife, Molly McNearney, announced that they will be expecting their second child.

James Christian Kimmel was born on November 13, 1967 in Brooklyn, New York and moved to Las Vegas, Nevada when he was nine. His mother, Joann Iacono, is a homemaker with an Italian background and his father, James John Kimmel, is an IBM Executive with German heritage. Jimmy Kimmel has two younger siblings. His brother Jonathan Kimmel is a director, producer and a writer whose credits include shows like South Park, The Andy Milonakis Show,  and Crank Yankers. He also works as a segment director on Jimmy Kimmel Live! Jimmy Kimmel’s sister, Jill Bryan, hosted a local television show in Arizona called Jill Bryan’s Scrumdillyumptious.

Jimmy Kimmel’s late uncle Frank Potenza was a retired police officer. He worked for the New York Police Department and former security guard. He became a regular on Jimmy Kimmel Live! until his death in 2011. Uncle Frank was married to Concetta Potenza a.k.a. Aunt Chippy who is also a regular on the show. Kimmel’s Cousin Sal Iacono is a writer for the show and is often seen playing pranks on Aunt Chippy.

Jimmy Kimmel’s first wife was Gina Maddy whom he met at Arizona State University. After dating for two years, the couple got married in 1988 and subsequently divorced in 2002. The former couple had two children a daughter: Katie and Kevin Kimmel.

Kevin Kimmel has an IMDB page with a growing list of credits. He worked in the sound department for Tosh.0 and was a production assistant on The Meltdown with Jonah and Kumail. Katie Kimmel is an artist with a BFA from The School of the Art Institute of Chicago.

When asked about what it was like to be married to Kimmel, McNearey said, “Our Christmas cards and stationery are all handmade by him; our wedding invitation, he drew. He makes vinegar, he makes pasta from scratch. He really is Martha Stewart. I’ve never met a man that’s so feminine and so masculine at the same time.”

Their first child, Jane Kimmel, was born on July 10, 2014. It was announced in December 2016 that the couple are expecting a second child. When sharing the news, Kimmel said, “So, there’s a lot of exciting stuff going on. Congratulations to me. I’m hosting the Oscars and I had sex. Two things as a teenage boy I never thought would be possible.”

When he was 21, Jimmy Kimmel started working in radio. After landing a morning slot on Tucson, Arizona’s KRQQ-FM, he was quickly hired by KROQ-FM in Los Angeles as “Jimmy the Sports Guy.” Kimmel’s television career began alongside Ben Stein on Comedy Central’s Win Ben Stein’s Money from 1997 to 2001.

Kimmel hosted The Man Show and co-created and voiced characters on Crank Yankers. In 2013, he landed his most successful role to date with his show Jimmy Kimmel Live!

Other than television, Jimmy Kimmel has also worked in several films like Road Trip, Like Mike, Garfield, Hellboy II: The Golden Army, The Smurfs 2, Pitch Perfect 2, and Ted 2.

Jimmy Kimmel’s net worth is a whooping $35.0 million. Besides hosting his own show, other film or television appearances, and his hosting stints, Kimmel’s wealth comes from endorsements and sponsorships. His annual income is calculated to be $4.0 million.