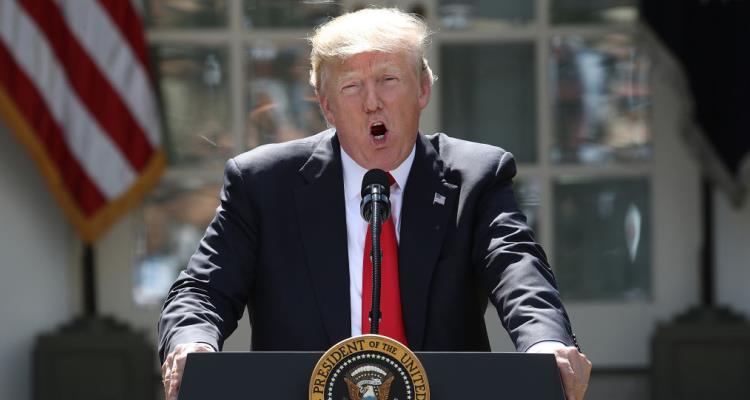 Former FBI director James Comey testified he was behind the leak of a private conversation between himself an President Donald Trump, and thought it would lead to a special prosecutor for the Russian investigation. Now, there are talks of impeachment and everyone is wondering whose hands the country’s fate could be in. If Donald Trump is impeached, who will be the president?

Every week it’s something new with Trump, and we always need a reminder that we aren’t watching a season of House of Cards. Everyone remembers when the president fired Comey during the Russian investigation, and now it’s the former director’s time to shine. As Comey went up against Trump and gave a televised broadcast of his side of the story, the White House was watching closely. In his testimony, Comey revealed that from the moment he met the president, he was worried that Trump would misrepresent any of their conversations. And the last thing anyone needs right now are alternative facts, which has been the unofficial motto of Trump’s administration. Luckily for Comey, he decided to take notes in meetings that he found were uncomfortable.

Comey accused the White House of lying about his role at the FBI and defaming his character.

“The administration chose to defame me and, more importantly, the FBI by saying the organization was in disarray … those were lies,” Comey said.

Comey said he wasn’t asked by Trump or staffers to out right stop the investigation, but his firing has left many confused, including the former FBI director. Trump also publicly stated that the FBI was poorly led, a statement that Comey didn’t agree with.

Comey stated that he believed it was right to make the details of their conversation public knowledge and believed they were unclassified recollections of his own as a private citizen. If you’re wondering why “The Donald” wasn’t tweeting his usual rants during the testimony, it’s because the White House did everything in their power to keep him busy and hoped he wouldn’t have time to reply. Apparently it worked, though many are wondering why they don’t always do that—even though they shouldn’t need to in the first place. Chris Evans tweeted, begging the president to tweet his opinion of the testimony, but not even the charms of Captain America himself could lure the president out of hiding. Instead, Evans and the rest of the country had to settle for the president’s sons, (except for Barron) who were happy to fill in and join the family tradition of a good old fashioned Twitter war, while they “make America great again.”

#JamesComey testifies before the Senate Intelligence Committee, "The FBI is strong. And the FBI is and always will be independent."

The White House is already in some hot water with the climate change debate and Trump drew a line in the stand when he stated that he would not be involved in the Paris Accords. Since he took office, President Donald Trump’s approval rating has gotten lower (mostly with Democrats) and now the White House is distancing themselves from the attention that Comey’s testimony is giving them.

Who’s Next in Line as President?

Many are wondering about president Donald Trump’s impeachment odds, some are even praying for it. But it’s not that easy to take down a sitting president, and it usually requires great failure to do his job or proving an illegal act. Most resign, like in Nixon’s case, and then someone else takes their place. According to CNBC, following James Comey’s testimony given today, President Trump approval ratings hover between 35-40%. A prediction trading site called PredictIt noted that 18% of betters are putting there money on Trump being impeached by the end of 2017.

But the argument as to what constitutes Trump’s impeachment remains, with many debating the whole situation. Saikrishna Bangalore Prakash, a James Monroe distinguished professor of law at the University of Virginia and senior fellow at the Miller Center, told Newsweek, “Impeachment is partly a perception question,” Prakash says. “Imagine Trump’s had several conversations with Vladimir Putin about how to harm Hillary Clinton’s prospects. There will be plenty of people who think it’s an impeachable offense, and others who would say it’s terrible, bad judgement, but doesn’t rise to their level of what an impeachable offense is.”

If Trump is found guilty for stealing the 2016 election, then he would be impeached and Vice President Mike Pence would take over in his place. It wouldn’t be a win for Democrats (and a few Republicans), but it would ensure a smooth transition of power. But that all depends on what happens next; for now, Trump is still covfefe in chief.