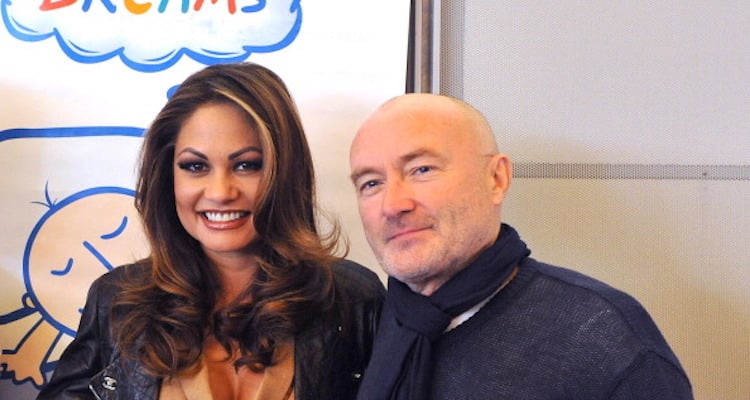 Phil Collins‘ health has been the topic of discussion after the 66-year-old musician was hospitalized, after falling while on tour. After learning the news of Phil Collins’ fall, many of his fans are wondering how Phil Collins’ daughters and sons are doing. If you want to know more about Phil Collins’ girlfriend and family, we have everything you need right here.

Who is Phil Collins?

Philip David Charles Collins was born on January 30, 1951 in London, England to Greville Collins, who was an insurance agent, and his wife June, who was a talent manager. Phil was one of three children; his older brother, Clive became a cartoonist and his sister became an ice skater. Phil eventually grew up to become on of the most successful singers in the world during the ’80s and released several hits between 1984 and 1990, including “In the Air Tonight,” “You Can’t Hurry Love,” and “I Don’t Care Anymore.”

Why was Phil Collins Admitted?

Collins, who is currently on tour, was scheduled to play a gig at London’s Royal Albert Hall when he fell and hit his head on a chair as he walked to the bathroom in his hotel room, on Wednesday night. The English hitmaker —who has been semi-retired for the last decade to a dislocated vertebrae in his neck—had to have stitches due to the wound from his fall. He is currently being kept under observation, after being hospitalized and having to cancel two of his tour shows.

A statement by Collins’ spokesperson said: “We unfortunately have to announce that Phil Collins’ performance at the Royal Albert Hall in London will be postponed tonight (06.08.17) and tomorrow (06.09.17). Phil suffers from ‘drop foot’ as a result of a back operation which makes it difficult to walk. He rose in the middle of the night to go to the toilet and slipped in his hotel room, hitting his head in the fall on a chair. He was taken to hospital where he had stitches for a severe gash on his head close to his eye and is recovering well. He will be kept under observation for 24 hours.

“Phil sends his sincere apologies and thanks to fans. He has had a fantastic week at his first shows in 10 years, cannot thank people enough for their warm reaction and is excited to return.”

Collins is still expected to perform in Cologne, Germany on June 11, as well as Paris, Dublin, and BST Hyde Park on June 30.

Phil is looking forward to sharing even more exciting news with you all on his Facebook page! Make sure you keep your eyes open#moreNews#NotDeadYet#philcollins

Who is Phil Collins’ Girlfriend?

Phil Collins’ girlfriend and partner is none other than his third ex-wife, Orianne Cevey. He recently returned to music after their sons gave him the courage to play again and get back to what he loves.