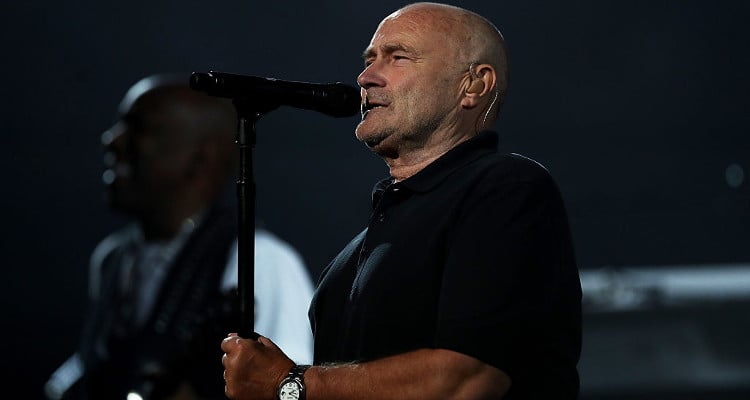 Phil Collins has given the world a vast treasure of songs, both as a member of Genesis and as a solo artist. His songs are timeless and are still played on the radio today. Though his personal life has been patchy, Collins remains on good terms with his children. With a net worth of $260.0 million and a tour underway, Collins is giving younger pop stars a run for their money.

There is a bit of bad news for Phil Collins fans. According to sources, the singer canceled two shows at the Royal Albert Hall after he slipped and fell in his hotel room! Collins was having trouble walking after a back surgery, fell on his way to the bathroom, and now has a gash near his eye. His management said that he received stitches in the hospital and will be kept under observation for 24 hours. Phil Collins’ fall has resulted in the cancellation of his June 8 and June 9 shows, which were eagerly anticipated by his loyal fans. This was the first time in 10 years that the singer performed, and he was enjoying his time on stage. The cancelled shows have been rescheduled for November 2017. Keep reading for some details from our Phil Collins wiki.

Born on January 30, 1951 in Chiswick, West London, England to Winifred Strange and Greville Collins, Phil Collin’s age is 66. He started playing drums at the age of five when he was given a toy drum set. Later, as Collin’s talent became pronounced, his parents bought him more elaborate drum sets. No wonder he grew up to become one of the best drummers in the world! Some of the musician’s early influences were The Beatles, The Action, as well as the jazz and big-band drummer, Buddy Rich. Collins was introduced to the soul music of Motown and Stax Records, and his later years cut several records as a tribute to the genre.

Also Read: Cheryl Seaborne Wiki: Everything You Need to Know about Ed Sheeran’s Girlfriend in 2017

Wishing Phil a very Happy Birthday! Here's to an exciting 2017…

Read this feature from @shortlistmagazine on why 'Phil Collins is one of the most important musicians alive': bit.ly/Shortlistmag

Phil Collins first joined the band Genesis as their drummer. When Peter Gabriel left the group, he soon took over the band’s lead vocals, as well. Genesis became wildly successful and released albums like Selling England by the Pound, A Trick of the Tail, and …And Then There Were Three… But all the while, Collins harbored dreams of making his own music. In February 1981, he released his first solo album, Face Value. In subsequent years, he earned fame as a solo artist with albums like Hello, I Must Be Going!, No Jacket Required, …But Seriously, and Dance Into the Light. Phil Collins’ songs like “In the Air Tonight,” “I Don’t Care Anymore,” “You Can’t Hurry Love,” “Against All Odds,” “One More Night,” “Sussudio,” “Take Me Home,” “A Groovy Kind of Love,” “Two Hearts,” “Another Day in Paradise,” and “I Wish It Would Rain Down” became chart toppers and radio staples.

A Massive Net Worth

Phil Collins’ net worth is a massive $260.0 million and is still rising, thanks to the continued sales of his albums, singles, videos, and tours. He has sold more than 100 million records, both as a member of a band and as a solo artist. He is only the third musician, after Paul McCartney and Michael Jackson, to do so. However, Collins personal life has been less than ideal. He has been married three times and has five children, including one adopted daughter. Phil Collins’ daughters are named Joely and Lily, and he is very close to them. His sons are Simon, Nicholas, and Matthew. Even though he and his third wife, Orianne Cevey (divorced in 2008), the two have reconciled, and they have been living together since January 2016.

A Master of His Craft

Phil sat down with @deezer for an in-depth conversation about his own music and musical inspirations. Watch here http://smarturl.it/CloseUpPhilCollins (link in bio) #philcollins

Right now, all of Collins’ fans are hoping that the singer recovers from his fall and quickly returns to where he truly belongs; performing on stage. Phil Collins’ tour will continue on June 11 in Cologne, Germany. He will then perform in France, before returning to England for his June 30 concert. Though Collins has been criticized for his music over the years, with some accusing him of “selling out,” there is no doubt that he is a master at creating finely crafted pop songs that have stood the test of time. His songs are as loved today as they were when they were first released, and his achievements speak for themselves.