Amanda Kloots-Larsen lost her husband, Nick Cordero, to coronavirus on July 5, 2020. Kloots had been documenting the Broadway star’s health battle on social media for months. And she occasionally shared stories about their relationship, too. Kloots, who is currently a sought-after fitness trainer, met Cordero through the stage and shared the same love for the performing arts. Our Amanda Kloots-Larsen wiki reveals more about their marriage and her career.

Amanda Kloots was born on March 19, 1982 to Maureen and Fred Kloots. Amanda and her siblings, including her younger sister Anna, grew up in Canton, Ohio. They were students at GlenOak High School.

Today is my birthday! I’m so thankful today for my family and friends! I’m thankful for our health and the ability to all be together today. We won’t be doing much today, haha, but I do want to take a drive to the ocean because seeing water always makes me happy. This photo was taken a couple weeks ago and if you slide to the right you’ll see a similar photo we did from our engagement shoot. During the shoot Nick thought it would be cute to recreate the photo we did years ago now with Elvis! Nick and I love to dance, we love to sing and we love to smile. Here’s to another year of doing just that!

“I had a wonderful childhood,” said Kloots. “I come from a big family, 5 kids, and we did everything together.  We all were in the arts, played instruments, danced, or sang in choir.”

Kloots is the only one among her siblings who didn’t do a four-year college program. But she’s grateful that her parents supported her performing arts dreams.

Before she started her showbiz career in New York, Amanda Kloots was showcasing her star quality in school. She caught the theater bug when she was among the students in Pleasant View Middle School selected to participate in a GlenOak production of Fiddler on the Roof.

Kloots moved to New York after graduating from high school in 2000 and established her stage career there. By the time her sister came to New York to study fashion, Kloots was an adapted New Yorker who showed her sister around.

We’re really excited to announce some thing today that we’ve been working on since January!    It’s no secret we like to keep things positive and always smile! So it should be no surprise that we love to celebrate the things that make us happy: people, places, moments, holidays, food – everything really! We think if the thought of it makes you smile, it deserves a little celebration. HOORAY FOR is the way you can have a little party every day for something that makes you happy. (And look fabulous doing it!) This idea was born after we went to see Nick in Rock of Ages! The  narrator wears shirt that says hooray for boobies in one scene, I turned to @annakloots and said “I want that shirt ! She said I want hooray for glitter! And cake! And sisters! The idea was born. It took us a very long time to find the perfect vintage white T-shirt with a relaxed fit, and lightly worn-in edges, but we finally found it! It washes great, is not at all see-through and is long enough to be tucked in!    There are a million things we want to celebrate – but we’re starting with the most important things right now: life and health heroes! Half of the proceeds of these two designs will go to The World Health Organization’s COVID-19 response fund    . We’ll be adding more designs soon and are working on providing international shipping! (Right now it’s only shipping in the US!) Comment below what you want the next HOORAY FOR…. to be!?  

Her sister Anna ended up marrying a fellow GlenOak graduate-turned-magician in New York, Joshua Jay. And Amanda was the key to bringing Anna and Joshua together.

Kloots’ Was a Rockette at Radio City Music Hall

The Ohio native began learning dance when she was enrolled in a performing arts oriented primary school at the age of nine. Amanda Kloots went to ballet classes after school and performed with the Canton Ballet in high school.

Kloots went on to study at the Two-Year Conservatory of the American Musical and Dramatic Academy in New York. Two days before graduating in 2002, she got a part in the national tour of 42nd Street. Her first professional gig lasted 14 months.

Amanda Kloots’ career breakout came when she landed a spot with the iconic high-kick troupe, The Rockettes, and performed with them at Radio City Music Hall for two Christmas seasons. It was a dream come true for Kloots, who first saw the Rockettes live when she was six years old.

She auditioned unsuccessfully twice, including making it to the advanced round before getting cut. After some coaching from other Rockettes in 42nd Street, she made it in her third try and performed in the middle line where the tallest Rockettes always dance.

However, Kloots’ Broadway career had its ups and downs. She went through tough auditions, endured rejections, and had to overcome closures of her shows. She performed in Bullets, Follies and Good Vibrations on Broadway and in national tours of Monty Python’s Spamalot and Young Frankenstein.

During her performing career, Kloots was a contributor for Just Desserts NYC, a desserts-themed blog. A fitting job for a sweet-toothed girl who grew up next door to a Dairy Queen.

Kloots Is a Fitness Trainer

When she was between jobs in her theater career, Amanda Kloots supplemented her income working as fitness trainer. It wasn’t difficult for someone who had a passion for staying fit through dance.

Kloots’ Broadway dreams were going nowhere when she decided to focus more on her fitness job. “The Rope & The Dance & The Body” fitness class by Amanda Kloots began in 2016. Combining cross training with powerful dance a la Rockettes and a jump rope, Kloots’ workout helps burn calories and build muscle.

Kloots made the difficult decision of giving up on her Broadway aspirations to build her fitness brand. But as business picked up and there was a growing demand for her fitness classes, her regrets vanished.

Amanda Kloots met a fellow musical theater artist named David Larsen when they were both cast in a production of Good Vibrations. They were married for seven years and occasionally spent time apart when they were on tours.

During a dry spell in her theater career, Kloots and Larsen’s marriage broke down. Kloots said getting divorced at 32 was “unexpected” since she thought their relationship was getting better.

A year before her divorce, she met Nick Cordero when they were both cast in Bullets Over Broadway. Cordero was nominated for a Tony Award for his performance.

They became friends and then, after her divorce, began dating. Cordero and Kloots got married on September 3, 2017 in New York City. Their son, Elvis Eduardo Cordero, was born on June 10, 2019. 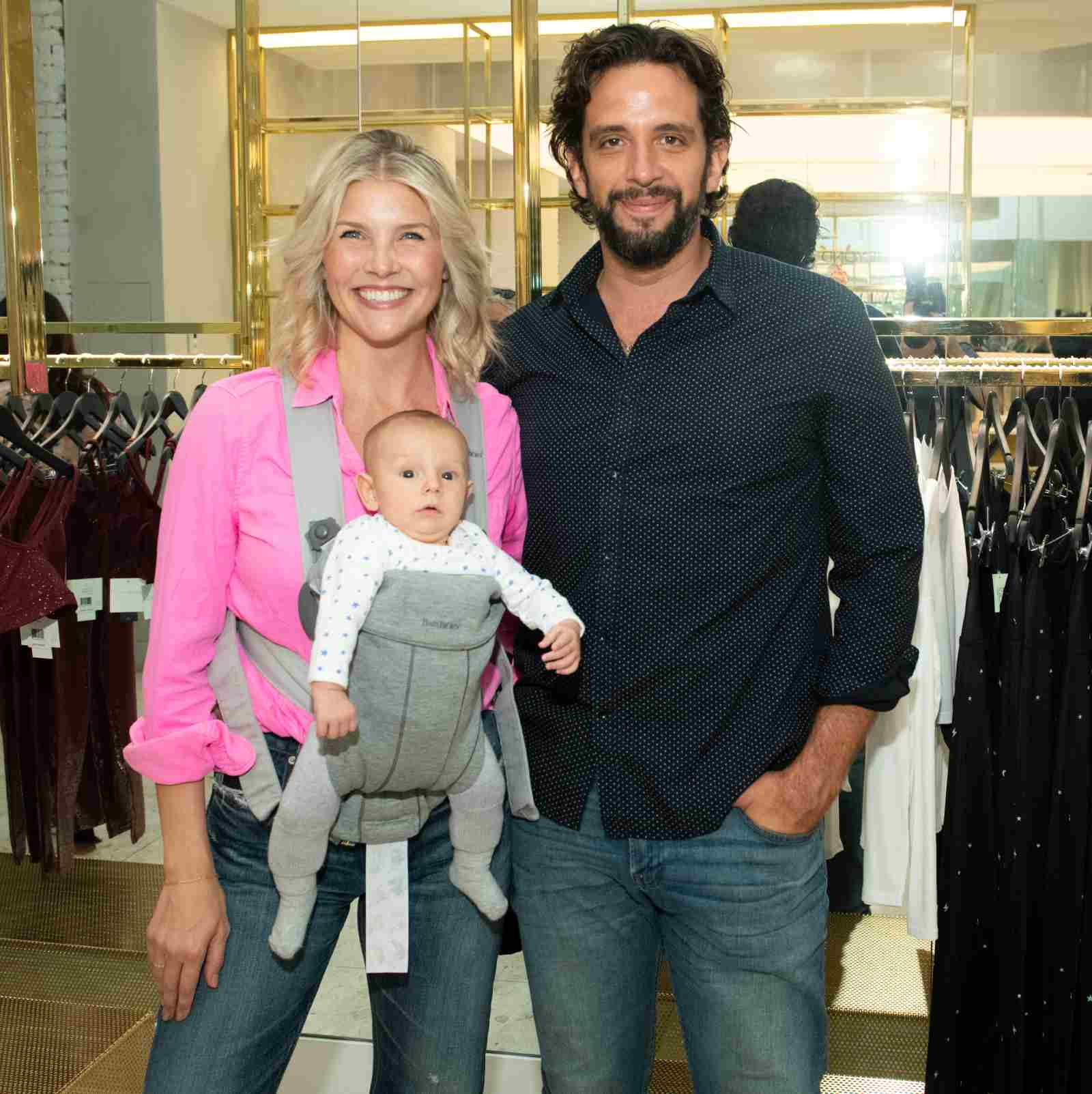 (Photo by Noam Galai/Getty Images for Beyond Yoga)

Sadly, in 2020, Cordero had a long battle with coronavirus complications that lasted over 95 days. He missed his son’s first birthday, while Kloots relayed updates on her husband’s health on social media.

Nick Cordero passed away of coronavirus complications on July 5, 2020. He was just 41.