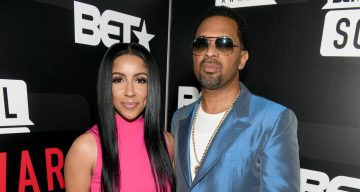 Comedian Mike Epps apparently began a relationship with another woman while his divorce to Mechelle McCain was still ongoing. With the divorce out of the way, Epps announced his relationship with his girlfriend, Kyra Robinson, OWN’s producer for Iyanla: Fix My Life. And now this couple is engaged! Our Kyra Robinson wiki has the lowdown on the complicated drama that haunted Epps and Robinson’s relationship.

His Ex-Wife Was “Blindsided” by the Divorce

Michael Epps met Mechelle McCain while they both worked in The Fighting Temptations and got married in July 2006. But their marriage came to an end in September 2017, when it was revealed that the couple got divorced.

They are parents to two daughters, Maddie and Mariah. Epps has two more daughters from a previous relationship.

However, before their divorce was finalized, McCain made a shocking revelation.

In February 2016, McCain said that she was blindsided by divorce talk after finding out Epps had a girlfriend.

McCain told TMZ, “It was shocking to me. I didn’t know we were separated since the summer time, we’ve been doing everything a married couple does until January… I think when I saw him walking down the streets of New York with a ‘mysterious’ girl then that did it. I was being the loyal wife and it threw me for a loop.”

The mystery woman was later revealed to be Kyra Robinson, who hails from Chicago, Illinois. Although Kyra Robinson’s age is unknown, we do know that she celebrates her birthday on September 16.

Epps and Robinson initially kept their relationship a secret. But amid his legal battle with his wife, he debuted his relationship with Robinson. They featured on each other’s social media accounts and looked absolutely smitten with each other.

I know I have angels because it feels so good to feel this good. Michael, there is no one better! ❤️

In May 2018, Mike Epps and Kyra Robinson’s engagement was subtly announced on their respective Instagram accounts.

Kyra and Mike Epps got married in June 2019.

Kyra Robinson’s a Producer at OWN

Kyra Robinson mentions on her social media bio that she works for the Oprah Winfrey Network (OWN) as a producer on Iyanla: Fix My Life. In the past, she interviewed reality stars and people who are experts in their field for her (now defunct) website and YouTube channel.

She currently lives in Los Angeles where her work is based.

Robinson also has credits as a producer on shows like Paternity Court, Just Keke, and Sex Box. She’s been working in the television industry for over seven years and gained experience with MGM and Telepictures.

She Studied in Costa Rica

Robinson’s father passed away before she was born. She uses her life experiences while growing up to help connect with the subjects of the shows she produces.

As a child, she always wanted to be a news anchor and was set on that path. After graduating from Whitney M. Young Magnet High School, she attended Columbia College in Chicago, where she earned a bachelor’s degree in broadcast journalism.

Robinson interned at NBC’s investigative unit while studying at the college. However, she realized that she didn’t want to work in the investigative broadcast field. So, she went to Costa Rica and acquired a degree in Latin American history and journalism from Universidad de Veritas.

When she returned home, Robinson signed up for a program in Los Angeles that led her to work for Paramount and Raleigh Studios for a few months. She had a job offer at Access Hollywood before she graduated but turned it down and returned to Chicago.

She told her professor that she didn’t want to be a news anchor, and she started her Internet show instead.

In 2011, she ran her Internet talk show called Kyra Ave. She interviewed celebs and built her online profile. However, her YouTube channel and website can’t be found on the Internet anymore.

She even collaborated with Epps to executive produce the BET Social Media Awards in 2017. But now that Mike Epps and Kyra Robinson are engaged, maybe we’ll see more creative shows coming from the couple.