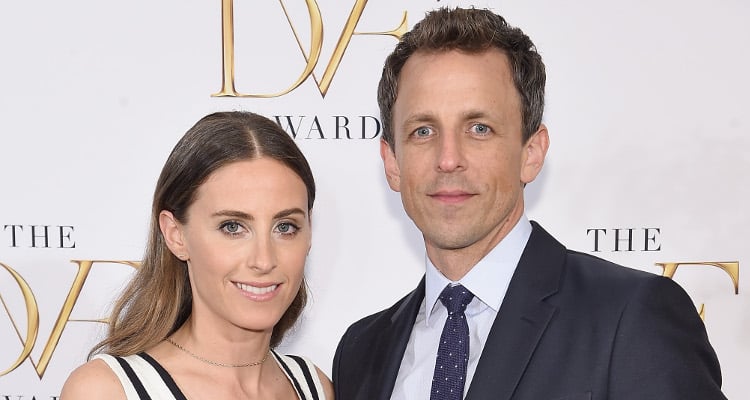 Though Seth Meyers is known for a quip on nearly every topic, he is pretty quiet about his personal life. Almost to the point where very few people know who Seth Meyers is married to. Well, Seth Meyers’ wife is Alexi Ashe, and she avoids the limelight just as much as her husband courts it! The late night host fell in love with Alexi the very first time he saw her. Today, they are blissfully married and proud parents. And she’s an impressive woman too! Undoubtedly, Meyers hit the jackpot with his amazing wife as we elaborate in our Alexi Ashe wiki.

Alexi Ashe, born in 1984, is one of three kids and the younger daughter of Thomas and Joanne Ashe. She has an older sister, Ariel Ashe, and younger brother, Tolya Ashe who were all raised in Albuquerque, New Mexico.

Thomas Ashe is a professional photographer with decades of experience. Besides capturing incredible images of historical sites like Auschwitz, he also photographed Elton John in the ‘70s.

Happy Mother’s Day to the most incredible women in my life. Thank you guys for always devoting your time, kindness, love, support, tender care, and for all the joy you have brought not only to me but to our whole family. Love you all. @joanneashe @arielashe @alexi @thefrisbeemeyers

Meanwhile, Alexi’s mom has a very interesting career as a filmmaker. Joanne Ashe is the founder and executive director of Journey in Film, a production company that works with USC to produce a film-based curriculum. Alexi is also an advisory board member on this team.

She also makes documentaries that have attracted international attention to social issues. Her most noteworthy work that premiered in the 1998 SUndance festival, Waiting for Children, addresses international adoption.

Perhaps Joanne’s drive to educate the new generations on these issues comes from her own experience being raised by parents who were Holocaust survivors. She also created a therapy group in New Mexico to help survivors’ trauma and speak at schools in New Mexico about the struggles they underwent.

Alexi’s brother, Tolya, is a chef with a very cool Instagram page. Ariel Ashe is an interior decorator who together with her professional partner, Reinaldo Leandro, has designed Alexi and Seth Meyers’ Manhattan home, former Obama White House counsel; Kathy Ruemmler, and the set design for Saturday Night Live.

Ashe Is a Human Rights Attorney

Passionate about human rights and social issues, Ashe acquired her BA in Political Science and Government from Occidental College in 2006 before acquiring her Juris Doctor in International Human Rights from Southwestern University School of Law in 2011. Before acquiring her law degree, she had worked as a policy and research analyst at the LA City Attorney’s Office.

Soon after earning her JD, she did a stint as a pro-bono ADA for a year and interned at Human Rights First. After less than a year as a legal counsel at an investment firm, she got a job as a Grants Writer at the New York branch of the World Wide Orphan Foundation.

In 2013, she had been an ADA in the sex crimes bureau of the King’s County District Attorney’s Office in Brooklyn. She left the job in 2017 and now works for victims of domestic violence at Sanctuary for Families. She is named among New York’s “New Abolitionists” for her work in anti-trafficking.

Back when Seth Meyers was on SNL, he attended the 2008 wedding of his co-star, Chris Kattan. Also in attendance was SNL set designer, Ariel Ashe’s sister, Alexi Ashe.

And the moment Meyers so Alexi, it was love at first sight for him. “I had a sense that she was the closest I’d ever met to someone who I could see myself with. Pretty much right away,” recalled Meyers.

After five years together, they got engaged in July 2013 and tied the knot on September 1, 2013 at Martha’s Vineyard. And what a memorable wedding they had!

Ashe almost couldn’t make it to her own wedding because she was struck with a severe case of food poisoning at their rehearsal dinner and had to be rushed to the emergency room. Nurses advised her to delay their wedding till she got better but Ashe was determined to get married that day.

But with the help of Chicago Bears’ team doctor, Adam Bennett, Ashe was able to brave through the illness and make the most of her special day.

Their Son Was Delivered in Their Apartment Building

Three years after that eventful wedding, Ashe gave birth to a healthy baby boy, Ashe Olson Meyers on March 27, 2016. But it was their second son, Axel Strahl Meyers, who made a dramatic entrance into the world.

Meyers recalled on Late Night that he had called 911 and they were in the process of taking Alexi to the hospital. But Axel was born early, in the lobby of the couple’s apartment building.

The best thing about this guy turning three is he still loves kisses from his parents and is no way super bummed that we are getting in the way of him eating his cupcake.

Their very helpful neighbors put towels in the dryer to keep newborn Axel born till help arrived. When help in the form of New York Police Department officers and emergency personnel arrived, they cut the cord.

Axel’s middle name honors Alexi’s grandparents who met in a hospital in Austria after they were liberated from a concentration camp.