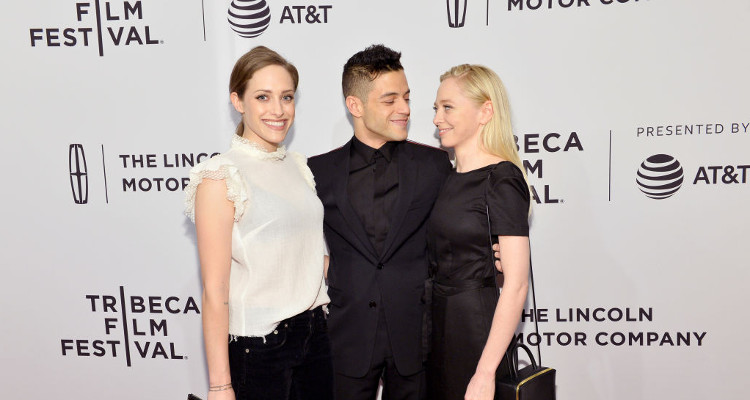 Rami Malek was on the threshold of stardom when he went from playing a vampire on Twilight to nailing the starring role in Mr. Robot. While his acting career is on the rise, what about his dating life? Does Rami Malek have a girlfriend in 2017?

If you’re Rami Malek, life is looking good! He stars in the critically acclaimed drama, Mr Robot, he’s snagged a few awards, and he’s pretty much a fashion icon now with his colorful suit at the Met Gala. Everyone’s raving about his amazing performance in the indie psychological drama, Buster’s Mal Heart, and Adam Lambert endorsed him to play the iconic Freddie Mercury in the upcoming biopic. So professionally, things are smooth sailing for Malek. But what about his love life? He keeps his personal life as private as Elliot Anderson in Mr. Robot and that just intrigues us more! Who is Rami Malek dating? Here’s what Rami Malek’s dating timeline looks like.

Before playing the reclusive hacker, Elliot Anderson, Malek was an on-screen vampire. He played Benjamin from the Egyptian coven in 2012’s The Twilight Saga: Breaking Dawn Part 2. Angela Sarafyan from HBO’s Westworld played his on-screen love interest in the movie.

Rumors that Malek and Sarafyan were more than just co-stars began circulating. Twilight fans all over believed that they were a real-life couple. There is no solid evidence as to whether or not they dated (unlike former Twilight power couple, Kristen Stewart and Robert Pattinson). With no way to confirm if these two were a thing, Malek and Sarafyan’s romance rumors eventually faded.

As is common in Hollywood, co-stars are often romantically linked by fans. The 35-year-old’s longest running romance rumor is with his Mr. Robot co-star, Portia Doubleday. She plays Elliot’s childhood and lifelong friend, Angela Mason. Their wonderful chemistry on-screen and their connection off-screen naturally led to dating speculation.

Doubleday’s Instagram adds to the speculation, with Malek being featured in most of her posts. They have some glam red carpet couple poses and he’s even cozied up to her dog. There’s also that somewhat kiss, which hints that they could be more than just friends. If these two are a real couple, fans are going to go crazy!

Around the time Rami Malek was filming Larry Crowne in 2010, he was seen out and about with an unknown woman. They were holding hands and many thought she was his girlfriend. But once again, that speculation fizzled out with the lack of confirmation.

Besides the rumors of him dating co-stars, there’s no real news about his love life. Malik still hits the red carpet in stylish suits without a date. He is pretty good at keeping his dating life a secret, and there’s no word about his relationships before his career began. But as he gets more popular, it’s going to be very hard for him to keep his relationships on the down-low, so we might hear about Rami Malik’s girlfriend soon!