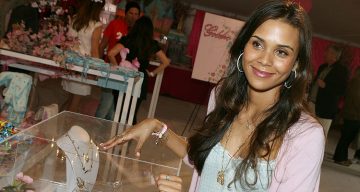 After 10 years, the much-awaited and controversial biopic on the late Tupac Shakur is here. While Tupac’s meteoric rise to fame is at the heart of the movie, the woman in his life, Kidada Jones gets prominence.

Producer L.T. Hutton took 10 years to chronicle Tupac Shakur’s life on the big screen. And now, All Eyez on Me hits theaters today (June 16), which would have been the late hip-hop icon’s 46th birthday. The movie explores Tupac’s life, his fame, and dangerous allegiance to Death Row Records through his relationship with the women in his life —his sister, his best friend, and his fiancée. As the sensation centering Tupac’s death never dies, his girlfriend-turned-fiancée, Kidada Jones remains in the media spotlight.

She Comes from a Famous Family

Born in LA, Kidada Jones is the daughter of two famous personalities: music producer and Grammy Legend, Quincy Jones and the iconic actress, Peggy Lipton. She has an older half-brother, Quincy Jones II, from her father’s first marriage to Swedish model, Ulla Anderson. Peggy Lipton and Quincy Jones are parents to Kidada and Rashida, who both followed in their mother’s footsteps and became actresses.

Kidada and Rashida Jones were raised in Bel-Air and lived a life of luxury. They went to school with socialites like Paris Hilton, Nicole Richie, and Kim Kardashian. When their parents divorced, Kidada stayed with their father while Rashida lived with their mother.

Also Read: Afeni Shakur Net Worth: Tupac’s Mom Just As Rich As Him

Tupac Commented against Her Father’s Marriage

When Quincy Jones, an African-American, married Peggy Lipton of Russian and Latvian ancestry, it was during at a time when mixed-race marriages were rare. Rashida Jones has often spoken about the hate her parents got for their marriage.

Tupac once went on a rant about interracial relationships and criticized Quincy and Peggy’s marriage. He added that Quincy’s children are “all mixed and [f***ed] up because they were biracial.” No one would take on the gun-toting felon at that time, except Quincy’s youngest daughter. In response to Tupac, 17-year-old Rashida Jones wrote a scathing letter and shut him up.

The twist in the tale is Tupac met Quincy’s older daughter and fell in love with her! When he was dating Kidada, he apologized to the family for his words and the pair later got engaged.

Kidada and Rashida Jones started their careers as actresses, like their mother. Kidada has acted in movies like Black and White, Thicker than Water, Intern, and Empire (the movie, not the awesome TV drama). While Rashida stuck with her acting career, Kidada turned to her other passion, fashion.

At the age of 19, Kidada was working for Tommy Hilfiger while attending the Los Angeles Fashion Institute for Design and Merchandising. She began working as a stylist for her father’s publication, Vibe and gained attention for styling Michael Jackson on the cover of the magazine in 1995.

She was Tommy Hilfiger’s muse for eight years before she worked for Snoop Dogg’s clothing line. The 43-year-old is a longtime designer of Disney Couture for the Walt Disney Company. Her design career has earned her a net worth of $3.0 million.

She was Friends with Aaliyah

Aaliyah was R&B’s rising star gone too soon. She passed away in a tragic plane crash at the age of 22. After her death, Kidada was devastated and often spoke about Aaliyah in interviews.

Kidada and Tupac dated for a few months before they were engaged. But Tupac was murdered in 1996 before they could get married. Many reports claim that she was one of the last people he had spoken to before he died in the hospital six days after he was shot. To this day, Kidada’s left arm still bears the tattoo of the deceased rapper.

After Tupac’s death, Kidada briefly dated LL Cool J and Leonardo DiCaprio. She married actor Jeffrey Nash in 2003. They divorced in 2006, but remain friends. Currently, there’s no word on whether Kidada Jones is in a relationship.