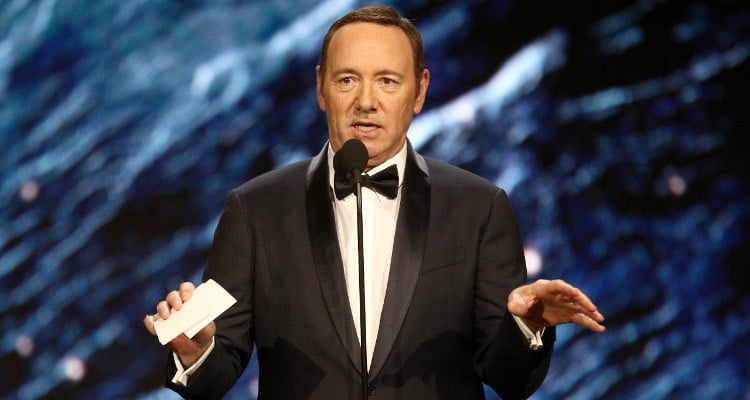 Within hours after Anthony Rapp accused Kevin Spacey of making sexual advances at him when he was 14, the Oscar winner issued a shocking statement. After apologizing to Rapp, Spacey came out as gay.

For years, Kevin Spacey remained mum on his private life, which caused speculation about his sexuality. People have asked if Kevin Spacey is gay for the better part of his career. He denied the rumors in interviews, but the speculation remained. Now, actor Anthony Rapp has publicly accused Spacey of sexual harassment, forcing Spacey to confirm the rumors of his sexuality. In a Twitter response, Spacey apologized to Rapp for his behavior while putting an end to the burning questions about whether or not Kevin Spacey is gay. Guess what! Those Kevin Spacey rumors were true all along.

In a recent interview, Anthony Rapp detailed an encounter with Spacey he had when he was just a teen. After many have come forward with sexual harassment allegations against Harvey Weinstein and other industry bigshots, it seems we are hearing of more sexual assault cases in Hollywood everyday. Rapp said that he was 14 when the then 26-year-old Spacey made a sexual advance at him. He escaped but avoided Spacey for a long time after that.

Rapp, now 46, has championed the fight for the LGBTQ community and is an inspiring role model for the youth. Spacey, known to keep his personal life under the radar and never seen with a woman on his arm, has been dogged by sexuality rumors for years.

Spacey slammed the gay rumors in an interview with Playboy saying, “I’m not married and I won’t talk about my private life, so it must mean I’m gay.” He even parodied the rumors about himself when he hosted the Tony Awards this year.

But after denying the claims for years, the 58-year-old finally declared he is gay in a statement on Twitter. Spacey stated that he respected Rapp and that he was “horrified” to hear his story. He went on to say that he has no memory of the incident which happened nearly 30 years ago. He deeply apologized for his actions.

Kevin Spacey has just invented something that has never existed before: a bad time to come out.

“But if I did behave then as he [Rapp] describes, I owe him the sincerest apology for what would have been deeply inappropriate drunken behavior,” said the House of Cards star in the statement. He further stated, “and I am sorry for the feelings he describes having carried with him all these years.”

Spacey went on to end the long-standing secrecy surrounding his sexuality saying, “This story has encouraged me to address other things in my life.” Reiterating that his tendency to keep his relationships private led to speculations,  as he confessed, “In my life I have had relationships with both men and women. I have loved and had romantic encounters with men throughout my life, and I choose now to live as a gay man.”

Jesus Christ, fuck Kevin Spacey. Using your coming out to cushion yourself from the flak of a sexual assualt is beyond fucked.

He further adds at the end, “I want to deal with this honestly and openly and that starts with examining my own behavior.”

Spacey’s well-meaning apology, however, has induced a collective eye-roll from Twitterverse. Many are not happy with the way he executed his “coming out,” accusing him of using it to deter people from seeing the bigger picture of the allegations.

The social media denizens are largely upset that it took sexual harassment accusations for Spacey to come out of the closet. More upsetting is the fact that he chose this time to come out.

Twitter users have gone to town expressing their displeasure and calling out Spacey for alleged child molestation. Spacey hasn’t denied Rapp’s allegations; he only said he doesn’t remember if it happened. But Twitterverse argues that Spacey’s suspiciously-timed coming-out statement follows accusations of him sexually harassing a 14-year-old, and as such, puts the LGBTQ community in bad light.

This incident could raise the question if Kevin Spacey did the same with any other minors; however, there is no authentic evidence found, so far. One would recall that the actor won the Academy Award for Best Actor for American Beauty, a drama where Spacey’s character falls in love with a young friend of his daughter. That reference appears to his undoing now since it surfaced that he made sexual advances at Rapp, who was a minor then.

Kevin Spacey : How do I apologize and get my career back on track

Lawyer : Use the gay card

This would be the first time the Baby Driver actor has been accused of making sexual advances at a minor. But in the past, among the many rumors about his sexuality, he was known to pursue men aggressively; however, this cannot be proven due to the lack of authentic sources. There have been first-person reports of Spacey where he’d ask out men in clubs, make suggestive remarks, and get “handsy” with them, among other things. But again. there’s no way to prove if these claims are true and are largely considered unfounded.

Kevin Spacey: Sorry I did that thing that I don't remember doing ok…big news everyone. I'm a full time gay now!

Rapp narrated the same incident in an interview in the past but didn’t mention Spacey. He did share this incident with his close acquaintances, and his brother, filmmaker Adam Rapp, who confirmed that Rapp has spoken to him about what he went through privately for years.

Journalist Heather Unruh tweeted a cryptic message soon after the Harvey Weinstein scandal broke out. “The #weinsteinscandal has emboldened me– #truth time. I was a Kevin Spacey fan until he assaulted a loved one. Time the dominoes fell” she wrote below a picture of the actor. Unruh hasn’t elaborated the connotation behind the tweet, but it raises questions if Spacey may have sexually assaulted anyone else in the past.

Nevertheless, the Twitteratti is rallying behind Rapp and is especially furious that Spacey perhaps used his coming out as a shield to protect himself from the storm of probable molestation accusations.

Spacey’s apology aside, he may go down in the Hollywood history for the worst coming-out ever!