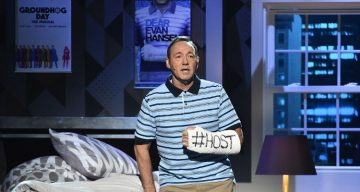 Kevin Spacey came out as gay in an apology to Anthony Rapp, after Rapp accused Spacey of making sexual advances at him 30 years ago when he was still a teen. Before the revelation, Spacey’s sexuality was speculated. At the 2017 Tony Awards, he even parodied the gay rumors that he has been subjected to for most of his career. Many have even wondered about Kevin Spacey’s wife. Is Kevin Spacey married? Here’s what you need to know.

Kevin Spacey just came out of the closet. At the 2017 Tony Awards, Whoopi Goldberg said Spacey’s sexual orientation “depends on who you ask.” The newly appointed U.S. President on House of Cards has landed in hot water, after actor Anthony Rapp accused him of making a sexual advance in the past. Hours later, Spacey apologized to Rapp and came out as gay.

When it comes to his private life, Kevin Spacey doesn’t say much, and he was never spotted with a woman. So, there’s next to nothing about his personal life or dating history. Naturally, many ask if Kevin Spacey is gay or if he has a wife or girlfriend.

Secrecy fits the image of Frank Underwood in House of Cards, but in reality, the actor who portrays him is even more secretive. And Hollywood insiders say, “We know more about the surface of Mars than about Spacey’s private life.”

Spacey has previously slammed those for prying too much into his personal life and said, “I’ve just never believed in pimping my personal life out for publicity. I’m not interested in doing it. Never will do it. They can gossip all they want; they can speculate all they want. I just happen to believe that there’s a public life and there’s a private life. Everybody has a right to a private life no matter what their profession is.”

Spacey is understandably private, which isn’t uncommon among celebs. But the notable absence of a wife or girlfriend led him to be dogged by persistent rumors of his sexuality. Magazines had all but declared him gay in the past, which had led to the constant rumors.

The Oscar-winner’s usual date at all award shows was his mother, Kathleen Ann. His relationship with his father, Thomas Fowler, hasn’t been the best, and he took his middle name, “Spacey” as his last name.

While it’s impossible to believe a strikingly handsome man like Spacey is single, we only know he lives with his two beloved dogs. Other than that, Spacey has remained defiantly private about his personal life.

Is Spacey in Denial?

A long time ago, a tabloid once posted a picture of the handsome actor holding hands with a man. At that time, that man was a notable figure in the UK, hanging out with the political ‘who’s who’ of London. One of his close friends is British politician, Peter Mandelson. Mandelson is known to be gay but also prefers not to talk about his personal life. While it’s not reasonable to read too much into their low-key friendship, people still do.

Vanity Fair and Esquire have all but stated he is secretly gay. There were no facts provided to support the claim other than that he hasn’t been seen with any women. Spacey hit back saying that the piece of news was “dishonest and malicious.” But there was no end to the speculation.

Spacey broke his privacy policy and told Playboy, “I’m not married and I won’t talk about my private life, so it must mean I’m gay.”

At that time, he said he dreamed of having a family and has dated women, saying that one of his relationships lasted nine years. He also joked that the rumors added to his sex appeal with women.

In 2000, he took his girlfriend as his date to the Oscars and thanked her when he won the award that night. Reports suggest that she was Dianne Dreyer, his script supervisor.

At the Tony Awards, he dropped many hints about “coming out.” Dressed as Norma Desmond from Sunset Blvd., he belted out the line, “I’m coming out,” before stopping himself and saying, “No, wait, no …” but it seemed like an innocent parody back then.

Who would’ve thought that after a few months of poking fun at his own gay rumors, Spacey would come out of the closet. Anthony Rapp, famous for portraying the first gay character in the Star Trek franchise, accused Spacey of making sexual advances.

According to Rapp, when Spacey was 26, he invited his fellow Broadway star, a 14-year-old Rapp to a party at his home. Rapp, who became bored, decided to watch TV in one of the bedrooms. After the party was over, a visibly drunk Spacey came into the room and made a pass at Rapp, allegedly picking him up and placing him on his bed. But the teen was able to evade Spacey and ducked out of the party.

“He picked me up like a groom picks up the bride over the threshold. But I don’t, like, squirm away initially, because I’m like, ‘What’s going on?’ And then he lays down on top of me,” Rapp explained in an interview with Buzzfeed. “He was trying to seduce me,” Rapp told the website. “I don’t know if I would have used that language. But I was aware that he was trying to get with me sexually.”

Rapp left the party that night and said that he avoided Spacey when they met at the Tony Awards years later. It’s been 30 years since he’s openly discussed it.

Rapp’s acquaintances know of his traumatic experience, but this is the first time he publicly named Spacey. The Harvey Weinstein scandal encouraged him to come forward with the experience that left him distressed for years.

A few hours after Rapp’s story went viral, Spacey made a statement through Twitter, apologizing to Rapp. He doesn’t deny the allegations, but he claims that he was drunk and has no memory of the encounter.

Spacey ended the statement by revealing that he is gay and said, “As those closest to me know, in my life I have had relationships with both men and women.” He continued, “I have loved and had romantic encounters with men throughout my life, and I choose now to live as a gay man. I want to deal with this honestly and openly and that starts with examining my own behavior.”

Until yesterday (October 29), Kevin Spacey’s coming-out ceremony after all these years of speculation would be an almost celebratory event. But, his suspiciously-timed coming out after he’s been accused of child molestation has prompted a wave of outcry on social media, particularly from gay activists. The Twitterverse is calling him out for shielding himself with a gay revelation, after he was accused of sexually harassing a child.