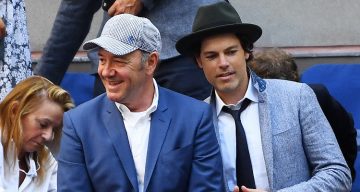 In the wake of the allegations against Harvey Weinstein, more people are coming forward with their experiences of sexual harassment and assault. The most recent involves Kevin Spacey and Anthony Rapp. After the Baby Driver actor revealed his sexuality, people want to know if Kevin Spacey is dating Evan Lowenstein. But is Evan Lowenstein gay? Find out more about Kevin Spacey’s boyfriend right here.

A lot of celebrities are coming forward with personal stories of being sexually harassed or assaulted. One person who recently had the courage to come forward with his story is actor Anthony Rapp. Over 30 years after the incident, Rapp revealed that  House of Cards star, Kevin Spacey made sexual advances to him.

He claims that, despite being 14 years old at the time, Spacey tried to seduce him after a party. Though Spacey has always been notoriously guarded about his private life, there was always speculation about him being gay. He took to Twitter to apologize to Rapp after the allegations: “I honestly do not remember the encounter, it would have been over 30 years ago. But if I did behave then as he describes, I owe him the sincerest apology for what would have been deeply inappropriate drunken behavior, and I am sorry for the feelings he describes having carried with him all these years.”

Throughout his career, whenever he was asked about his personal life or sexuality, Spacey refused to answer, opening the doors to speculation. Along with his apology to Rapp, Spacey confirmed the rumors about his sexual orientation: “This story has encouraged me to address other things about my life. I know that there are stories out there about me and that some have been fueled by the fact that i have been so protective of my privacy. As those closest to me know, in my life I have had relationships with both men and women. I have loved and had romantic encounters with men throughout my life, and I choose now to live as a gay man. I want to deal with this honestly and openly and that starts with examining my own behavior.”

With this revelation, people want to know who Kevin Spacey’s boyfriend is —if he even has one. During the 2016 Emmy Awards, he sparked dating rumors when he brought Evan Lowenstein as his plus one. If you want to know more about Spacey’s rumored relationship, we have all the information you need right here.

Who Is Evan Lowenstein?

Lowenstein was born on March 18, 1974, which makes his age 43. He has a twin brother, Jaron David Lowenstein, who is also a musician. The two perform together and have released three studio albums. In 2000, their single “Crazy for This Girl” ranked at No. 15 on the Billboard Hot 100. In 2011, Evan Lowenstein started Stageit, an online performance venue allowing  musicians to perform via webcam, and is currently a talent manager. For his latest updates and pictures, then head over to Evan Lowenstein’s Instagram account.

Despite the rumors that began in 2016, it was revealed that Lowenstein and Spacey are just good friends, as the former is a part of the actor’s management team.

As of now, there is no verified information about Evan Lowenstein being gay. However, he is a very vocal supporter of the LGBTQ community, as is evident from his social media posts. As for whether or not he is gay, or who he is dating, that has not yet been revealed.