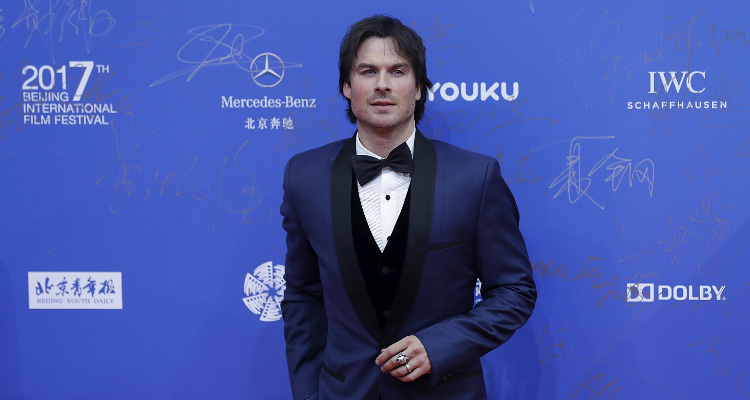 Ian Somerhalder and Nikki Reed welcomed their first child together. The couple is taking a break from the spotlight so they don’t miss a single moment of their daughter’s life. Would that impact their wealth? Barely! Especially considering Ian Somerhalder has a net worth of $8.0 million.

On-screen vampires, Ian Somerhalder and Nikki Reed are gushing parents to a baby girl and they are not going to miss their daughter’s first few weeks for anything! So, they’ve taken a break from the spotlight, turned off their phones, and have cut off all communication with the world to focus on being new parents. This means we’re not going to get a pic of a Somerhalder-Reed baby just yet! To celebrate the newest addition to the vampire family, let’s take a look at how rich her dad is in our Ian Somerhalder net worth article, right here. He’s already $8.0 million rich, so he’s off to a good start!

How Rich is Ian Somerhalder?

The latest estimates put Ian Somerhalder’s net worth at $8.0 million! His wife and big-screen vampire, Nikki Reed, has a net worth of $12.0 million, a decline from an earlier figure of $16.0 million. However, Somerhalder has doubled his wealth from a former $4.0 million.

While Reed earned one of the biggest paychecks among the cast of the Twilight series, Somerhalder was one of the top earners on TV, according to TV Guide. He reportedly earned a whopping $40,000 per episode of Vampire Diaries. Sure, it’s nothing compared to Hugh Laurie’s $400,000 paycheck per episode from House (Yes, $400,000), but it’s a pretty big deal. Reed had a tough time negotiating her salary to return to the final Twilight movies, while Somerhalder had no such issues.

Chilling with these two… After years of websites pretending these two badass ladies knew each other well and baseless, false information of back stabbing and hatred from low-brow websites filled the minds and hearts of fans… They finally were able to get together for their first real dinner. Let’s stop spreading hate everyone, there’s already too much of that right now in our world. Join in on the love. Only love here- always has been always will be. Media companies preying on the passion from vulnerable and or impressionable minds of fans to sell advertising through click-though traffic is a disease in our society. It’s poisonous. Let’s finish this series with respect and kindness and continue that in our lives. I think it’s time. What do think?

How Does Ian Somerhalder Make All That Money?

Most of the 38-year-old’s income comes from his acting jobs. But he puts his good looks to use and does a lot of modeling, too. He made his directorial debut with a few episodes of Vampire Diaries but has yet to expand on it.

Somerhalder is the middle child of three born to a massage therapist and a building contractor in Louisiana. Between the ages of 10 and 13, he embarked on a modeling career. The former teen model did campaigns with Guess, Gucci, Nautica, and Versace. Guessing from those smoldering Calvin Klein ads and those magazine shoots, he’s still got it! His most recent modeling gigs have been for an Azzaro fragrance, Chevrolet, Audi, Airstream, and Build of Barnwood. It is estimated that he makes over $360,000 from endorsements alone.

These issues are on they way out! Thank you @angelenomagazine for spending so much time with me and using your platform for good! Thank you all for picking up this issue

His most famous acting credits include Vampire Diaries and Lost. He also appeared on shows like CSI, CSI: Miami, Law and Order: SVU, Smallville, Young Americans, Tell Me You Love Me, and a few TV movies. His foray into the big screen hasn’t been as successful, with most of his movies failing either commercially, critically, or both. His most famous movie was the cult comedy, Rules of Attraction where he played Paul Denton, the bisexual ex-boyfriend of Shannyn Sossamon’s character.

He also adds to his wealth with investments. According to the actor, he has invested in 10 companies, including the clean tech company, GoGreen Mobile Power and the e-commerce health food business, Thrive Market. He’s one of the many Hollywood investors of Oncam, a video-calling and live streaming app. He also founded Rare Bird Productions with his wife.

I’m truly excited to be honored as the Superhero for Earth Awardee for the @captainplanetfdn 25th Anniversary Benefit Gala! #CPF25 @isfofficial You are here with me!!!! #iansomerhalderfoundation

Where Does He Spend the Money?

Soon after their wedding in April 2015, Somerhalder and Reed made headlines for their marital home, which came with a price tag of $2.85 million. A year before they bought it, the house was purchased by Red Hot Chili Peppers drummer, Chad Smith for $2.76 million.

The contemporary glass-walled structure in Venice, California spans 2,800 sq. ft. and has three bedrooms and 3.5 bathrooms. The loft-like living areas are connected by polished concrete floors. The pièce de résistance is the master bedroom, complete with a skylight, a walk-in closet, a deluxe bathroom with a separate tub, and walk-in shower space. He also drives around in an Audi worth $65,000 while Reed got three cars —two Toyotas and a Range Rover— when she divorced Paul McDonald.

To the most amazing human in the world. Thank you for 2 incredible years of marriage. Today, two years ago to the minute, we said “I do” and I couldn’t be happier or more grateful to you for this life. Thank you for being my best friend the hardest-working, kindest, most patient and most talented woman I’ve ever known. To you my love, I say that I know we will have so many of these we can’t even count them. Partly because I’ll be so old… I love you

Before moving in to their current home, Reed sold her Hollywood Hills villa (which she shared with McDonald) for $1.31 million. Somerhalder lived in a beach cottage in Santa Monica, which he bought in 2006 for $897,000. He rented out his old home for $4,200 a month. He made a few drought-friendly improvements to the house. Speaking of which…


Somerhalder is big on the environment and animals. He even did his bit in helping the cleanup of the Deepwater Horizon oil disaster. He also supports organizations for animal rights and has hosted fundraisers for the cause. Fans of Vampire Diaries together donated over $11,000 to his efforts for the St. Tammany Humane Society. With his on-screen brother, Paul Wesley, he sold over 10,000 t-shirts they designed with the words “Blood Brothers” to raise money for the Trevor Project.

Sohalia prefers shoulders to laps…she is our sweet shoulder cat. I’ll be at CatCon exclusively on Sunday, August 13th – looking forward to seeing all of you, taking part in the CatCon Awards and talking all things feline and ISF! FYI: $2 of every ticket goes to benefit the Ian Somerhalder Foundation. Thank you @Catconworldwide For more info and tickets visit: catconworldwide.com

He took his philanthropy up a notch by setting up the Ian Somerhalder Foundation on his 32nd birthday. The foundation aims to increase awareness and raise funds for environmental causes and animal rights. Through the foundation, he formed a partnership with RYOT, a cause-based news platform that is supported by other celebrity activists, Olivia Wilde, Ben Stiller, and Sophia Bush. Through his association with RYOT, Somerhalder became interested in investing in tech startups.

Ian Somerhalder and Nikki Reed welcomed their first child on July 25, a baby girl they named Bodhi Soleil. If you’re wondering why the news broke out only now, it’s because the couple is taking a timeout from fame to be with their new daughter. In a pregnancy feature with Fit Pregnancy, Reed said she and her husband would be taking the first month after their baby’s birth off. “After the baby arrives, we’re doing one month of silence. Just the three of us, no visitors, and we’re turning off our phones too, so there’s no expectation for us to communicate,” said Reed.

To our friends, family, and rest of the world. In my 38 years on this earth I’ve never experienced anything more powerful and beautiful than this. I can’t think of anything more exciting than this next chapter and we wanted you to hear this from us first. This has been the most special time of our lives and we wanted to keep it between the three of us for as long as possible so we could enjoy this time with each other and our little one who is growing so fast…because that’s what they do, they grow so fast. Thank you for your kind energy. Love, Ian