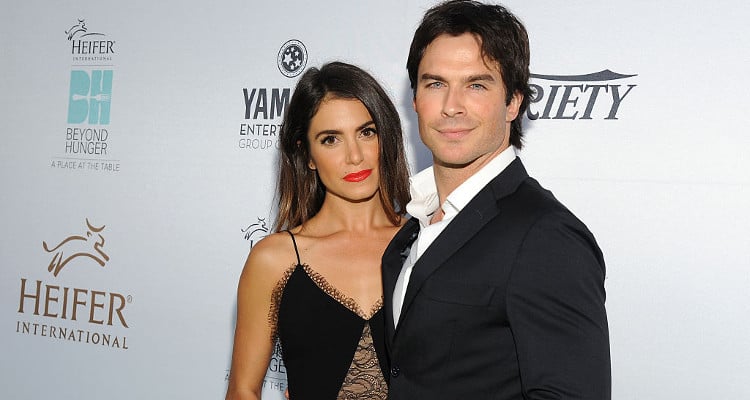 The Vampire Diaries star, Ian Somerhalder’s wife is another on-screen vampire. Nikki Reed is better known as Rosalie from the blockbuster franchise, Twilight. She’s been in the movie industry for a while now, but she’s most famous for her blood-sucking connections. Outside of reel life, who is the woman Somerhalder is married to? Find out more about Somerhalder’s wife, in Nikki Reed’s wiki right here!

#1. She was One of Highest Paid Twilight Actors

The 28-year-old portrayed the vampire, Rosalie in Stephanie Meyer’s big screen adaptation of Twilight. She was a fixed cast member for all five movies in the series. The actors of this mega franchise earned hefty paychecks and Reed was among the top five highest earning actors of Twilight. Of course, none were paid higher than Robert Pattinson who tops the list, followed by Kristen Stewart and Taylor Lautner.

Reed earned a net worth of $16 million in her career as an actress, screenwriter, singer-songwriter, and model. It’s a lot less compared to Pattinson’s $100 million and Stewart’s $70 million, but by no means is it a small amount. She’s four times richer than her husband, Somerhalder, who has earned $4 million in his career.

#2. Her Childhood was “Complicated”

In several interviews, Reed referred to her early home life as “complicated.” She was born in West Los Angeles, California to Cheryl Houston, a beautician and Seth Reed, a production designer. Reed has an older brother named Nathan August Reed, and a younger half-brother named Joey Reed. Her mother is of Cherokee and Italian descent and her father is Jewish.

When she was only two years old, her parents divorced and she was raised by her mother. Reed wasn’t raised in a religious environment, but her brother was raised Jewish and had a Bar Mitzvah.

Her teens were a difficult phase in her life, as she moved out of her mother’s home at the tender age of 14. She lived alone in various apartments in Los Angeles during that time. After finding success in acting, she returned to Alexander Hamilton School, but dropped out again after a year. She completed the remainder of her high school education through homeschooling.

#3. She Started Her Screenwriting Career Early

As a teenager, Nikki Reed met Catherine Hardwicke, the film director, production designer, and screenwriter who later directed the movie adaptation for Twilight. Hardwicke was a friend of Reed’s mother and briefly dated her father. They kept in touch and in 2002, began writing the script for the movie, Thirteen.

Hardwicke invited the young Reed to co-write the script for the semi-autobiographical teen drama. Parts of the film were even inspired from real-live events in Reeds life. She wasn’t initially keen on acting, but when Hardwicke couldn’t find a suitable teen actress to play the character Evie, she persuaded a reluctant Reed to step into the role. The movie, though controversial for its theme, was a critical success and launched Reed’s career.

#4. She Was Married to an American Idol Contestant

Nikki Reed and Ian Somerhalder began dating in 2014, though they had been long time friends before that. They tied the knot on April 26, 2015 in Malibu, California. Not only are they well-matched on-screen vampires, they’re animal lovers and have adopted many pets together. The couple are also on good terms with Somerhalder’s ex, Nina Dobrev.

But what about, Nikki Reed’s ex? She dated Paul McDonald in 2011. If his name sounds familiar, he was a contestant on season 10 of American Idol. They met at the red carpet of the season premiere of American Idol and later began dating. They got engaged and married in 2011. But all wasn’t so well with their relationship. Their hectic schedules got in the way and eventually, they announced that their separation, citing “work obligations.” The couple had been living apart for six months before filing for divorce in 2014.