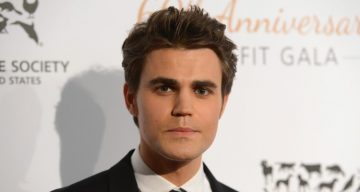 If you’ve been waiting anxiously all week to watch The Vampire Diaries, which usually airs on Friday nights, you may have noticed it was not on last night! Fans will have to be patient and wait an extra week to see what happens next! Due to Thanksgiving celebrations, the show did not air at its expected time last night (November 25) on the CW network, but will resume on Friday, December 2.

While this comes as sad news for anticipating fans, it gives others extra time to catch up on the first five episodes of the season! The previous episodes of the show’s eighth and final season are available to stream on CW’s official website, so get to it! Although it may be hard to wait the extra week, we’ve got some interesting facts to share about one of the most beloved characters. While The Vampire Diaries stars like Ian Somerhalder (Damon Salvatore), Nina Dobrev (Elena Gilbert), and Kat Graham (Bonnie Bennett) are active in wider areas of their careers and on social media, Paul Wesley, who plays Stefan Salvatore, remains mysterious. Even when it comes to social media, Wesley’s posts are rare, revealing highlights of his life but not enough to give all the details away. That smoldering, mysterious way about him must come naturally, because let’s face it, he does it way too well on the show! Curious to find out what we’ve learned about him? Keep reading our Paul Wesley wiki to find out more!

His Real Name is Not Paul Wesley

On July 23, 1982 Pawel Tomasz Wasilewski was born to parents Tomasz and Agnieszka Wasilewski in New Brunswick (some sources say Marlboro), New Jersey. He has one older sister named Monika, and two younger sisters named Julia and Leah. Wondering where his special name came from? The star has Polish roots and he even speaks the language fluently, thanks to spending four months each year in his home country, until he was 16. In 2005, he asked his parents to change his name to Paul Wesley because he thought it would be too difficult for people to pronounce his birth name.

Check out the video below to hear him speak Polish! It’s amazing how fluent he really is!

Wesley does not like television (nor does he own one) and prefers to fill his free time with a good read. His favorite book is J.D. Salinger’s The Catcher in the Rye, and the actor has said the book changed his life when he first read it. “Catcher in the Rye changed my life when I was a kid. I read it as I was a boy turning into a man, and I was so fascinated by the values. I believe in it.”

He Had an Amicable Divorce

If you’re searching for Paul Wesley’s wife, you’ll notice that the actor is divorced. In 2007, Wesley met actress Torrey DeVitto (One Tree Hill, Pretty Little Liars) on the set of their film, Killer Movie. They fell in love and decided to marry at a private ceremony in New York in April 2011. He lived in Atlanta, Georgia while acting in The Vampire Diariesm but when he was off work, he went to Los Angeles, California to spend time with his wife. In July 2013, the couple filed for divorce, which was finalized in December 2013 and they chose to keep the reasons private. With both actors living in different locations to pursue their career projects, many speculated that distance strongly affected their ability to succeed in their marriage. He sold his Los Angeles residence after the divorce wrapped up.

He is Dating Phoebe Tonkin

On the set of The Vampire Diaries in 2012, Wesley met Australian actress Phoebe Tonkin. The actress has been cast in multiple TV series including Tomorrow, When the War Began, TVD, The Secret Circle, and The Originals. The couple began dating in 2013 and have been together ever since.

Paul Wesley’s net worth of $2 million is largely attributed to his career as an actor, however, he is also a talented producer and director, and works largely on TVD behind the scenes.