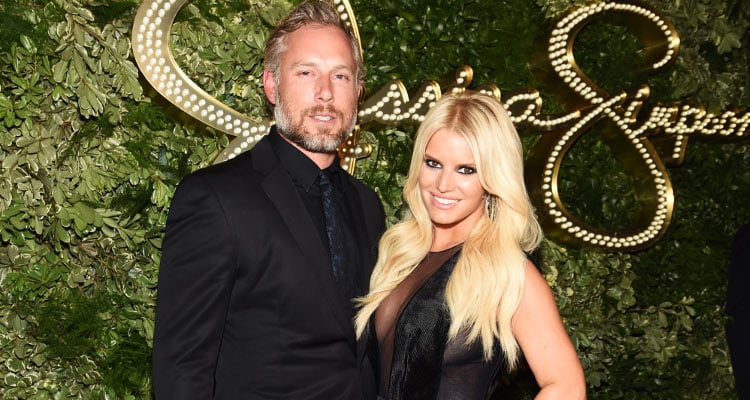 Jessica Simpson is married to former NFL tight end, Eric Johnson. Here is everything you need to know about Jessica Simpson’s husband.

Jessica Simpson recently revealed that she might be willing to make a return to reality television in a show starring her family! Though the news was overshadowed by her ex-boyfriend, Tony Romo’s retirement announcement, people are still excited. Despite what fans hoped, Tony Romo and Jessica Simpson never married. Who is Jessica Simpson married to? The singer is married to Eric Johnson, another football player who retired from the NFL when he was 28. We do not know how Jessica Simpson’s husband feels about showcasing their lives on TV, but we do know a bit about him. Here are some details from Eric Johnson’s wiki.

Eric Johnson was born in Needham, Massachusetts on September 15, 1979. He studied at Needham High School and Belmont Hill School in Massachusetts. He then went to Yale University, where he played Wide receiver.

Eric was in a relationship with freelance stylist, Keri D’ Angelo. They got married on May 14, 2005, but divorced two years later on October 17, 2009. Their divorce was finalized in October 2010.

Eric Johnson started dating Jessica Simpson in May 2010. After only six months of dating, the pair announced their engagement in November 2010. They have two adorable kids: daughter Maxwell Drew, who was born in May 2012, and son Ace Knute, who was born in June 2013. They got married on July 5, 2014, at the San Ysidro Ranch, in Montecito, California.

Their glamorous wedding had over 250 guests, including Jessica’s sister Ashlee Simpson and her now-husband Evan Ross, Jessica Alba and her family, Topher Grace and his girlfriend, as well as Tim Rattay and more of Eric’s football buddies from Yale and the NFL.

Eric is a romantic at heart. On their sixth anniversary of their engagement, he gave his wife a bouquet of flowers along with a sweet note thar read, “Happy 11/11 Thanks for saying yes after only 6 months. It started all this. I love you Eric.”

According to sources, Eric Johnson’s net worth is estimated to be $100,000. Despite playing for the NFL, taking almost 10 years off has lowered the former tight end’s net worth. With Jessica Simpson’s net worth being an estimated $150 million (and growing thanks to her thriving clothing line), we are sure that the family is doing just fine financially!