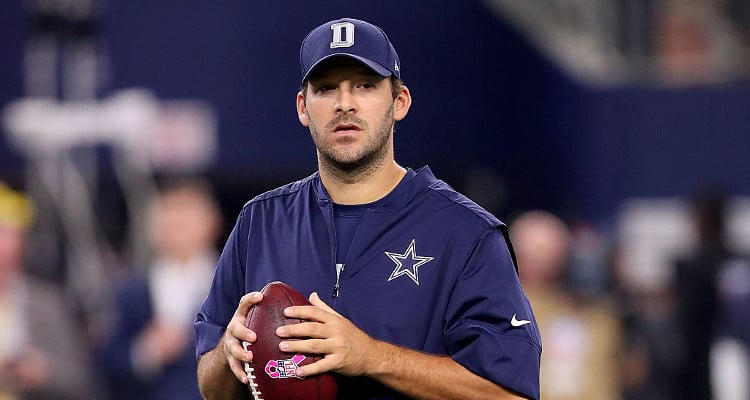 After an illustrious career in the NFL, Tony Romo has officially retired as a Dallas Cowboy legend. But he’s not out of football completely since his post-retirement plans include a spot on TV. Currently, his net worth is $70.0 million. How will that be impacted after his retirement?

After a long career with the Dallas Cowboys, Tony Romo has hung up his #9 jersey. He’s now retired from the NFL and his fellow Cowboys have officially said their goodbyes. The four-time pro is trading in his football jersey for a sharp suit. He’s now going to be seen more on TV as a sports analyst for CBS. After a long career in the NFL, he’s earned himself a sizable net worth of $70.0 million. Will his new TV career add to it? Find out in this detailed breakdown of Tony Romo’s net worth.

How Rich is Tony Romo?

The short answer is very rich. He’s one of the biggest earning Cowboys in the league! Not only does he have a net worth of $70.0 million, his lucrative endorsement deals significantly add to his wealth. Forbes listed him at #67 on the 2015 World’s Highest Paid Athletes List. He may never have led the Cowboys to the Super Bowl, but he has had two playoff wins. That’s more than any other Cowboy has had in the team’s history!

Romo’s contract and salary have been a topic of debate for a while. In 2003, when he began his pro-football career, he was earning $235,000. When he didn’t make it in the 2003 NFL draft, the Broncos and the Cowboys offered him positions on their teams. He turned down the Broncos’ $20,000 and signed as a free agent with the Cowboys for $10,000. As he made and broke records, his value increased and so did his salary. He had surpassed $127.0 million in 2016 over 14 seasons. That’s at least $40.0 million more than any undrafted free agent in NFL’s history.

In 2013, he signed a contract extension worth $108.0 million —the biggest contract of the franchise— which raised a few eyebrows. His game had suffered due to injuries at the time and many debated if the quarterback deserved the hefty paycheck. His yearly salary following the contract extension was roughly $15.0 million.

It was valid until 2019, but they released him early with a reduced salary cap from $27.0 million to $10.0 million. If he played until 2019, he could have been a very rich athlete. Spotrac estimates his market value, based on his current contract, at more than $47.0 million. The below table shows his earnings over the recent years.

Like most athletes who retire, Tony Romo is going to join the studio crew on TV as a sports analyst. When his retirement was announced, he had offers from Fox and CBS. Ultimately, he picked CBS.

Romo will be replacing Phil Simms, a top sports analyst at CBS. He has been in sports broadcasting for 22 years, of which he spent 19 of them at CBS. Simms is still on contract with CBS, so already bringing in his replacement has surprised a few people. Romo will be part of the NFL on CBS broadcast on Sundays and Thursdays with Jim Nantz and Tracy Wolfson.

At this point, there are three things we don’t know: the duration of Romo’s CBS’s stay, his CBS salary, and Phill Simms’ future.

I guess it's time to start dressing up. #CBS pic.twitter.com/GseSRiyNOo

A Favorite of Corporate America

The San Diego native is one of the major endorsement powers in the NFL. He has sponsorship deals with DirecTV, Under Armour, Core Power, and Pizza Hut. His deal with Under Armour was his most recent, following which Romo would wear their cleats and hats on the field. Before the deal, he was sponsor-free for two years and wore Nike cleats with paint-covered logos. Details of most of his endorsement deals aren’t disclosed.

Tony Romo once had an endorsement deal with Reebok worth $200,000, but his marketing power has drastically increased since then. The most lucrative deal in Romo’s career came from Starter. He signed a five-year endorsement deal with the apparel brand in 2008. The contract was worth a whopping $10.0 million! He broke the record for the largest sponsorship deal in the NFL at that time, which was earlier held by New Orleans Saint, Reggie Bush’s $5.0 million Adidas contract.

His contract with Starters expired in 2013, but many athletes continue to get endorsement deals even after retirement. With a legendary player like Romo, he could be looking at a new endorsement deal soon.

How Does Tony Romo Spend His Money?

When you’re earning that much, all that money has to go somewhere, doesn’t it? The ones who get to enjoy his wealth are his wife, Candice Crawford, and his sons. Before Candice, Romo was in a high-profile relationship with Jessica Simpson. Their relationship faced ups and downs with accusations flung at Simpson for distracting Romo and the Cowboys’ streak of losses. He broke up with her on the eve of her 29th birthday.

Simpson moved on with another NFL player, Eric Johnson, and Romo moved on with another beautiful blonde. Candice Crawford is a former journalist who was crowned Miss Missouri in 2008, and here’s a fun fact; her brother is the Gossip Girl heartthrob, Chace Crawford! Tony Romo and Candice Crawford married in 2010 and welcomed their first child, Hawkins Romo in 2012. Their second son, Rivers Romo was born in 2014. More happy news; the couple are expecting their third child this August! 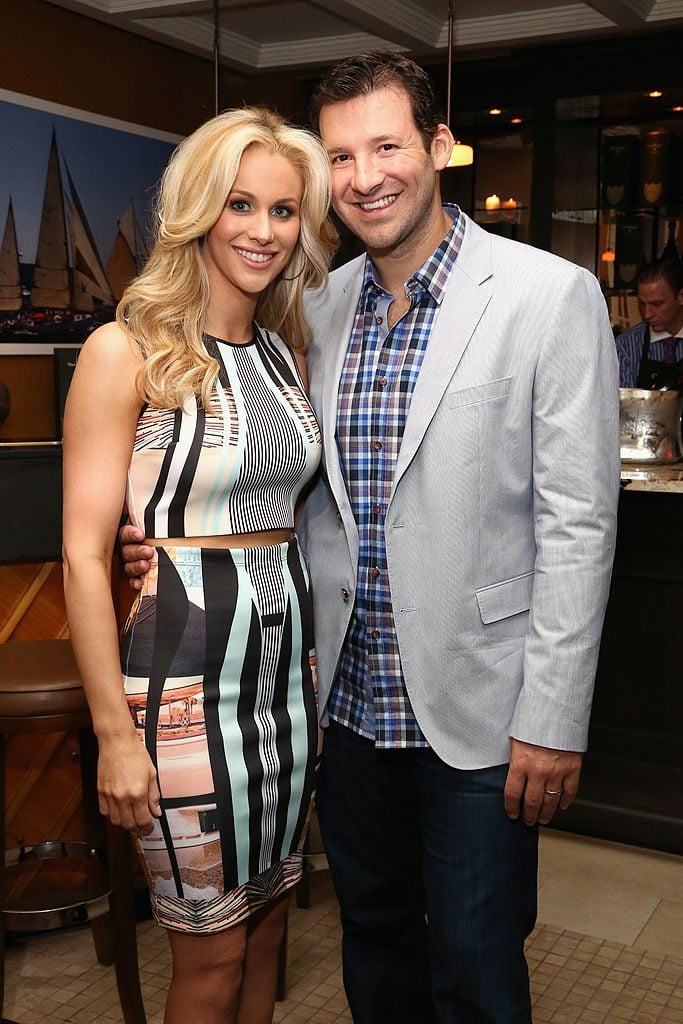 The Romo family lives in an insanely luxurious home in North Dallas. Romo had the mega-mansion built on a three-acre plot of land he purchased for $4.0 million. Romo once invited his teammates for a party at his home and Cowboys’ linebacker, Anthony Hitchens was so awestruck he couldn’t resist sharing pictures of the quarterback’s home!

Romo’s residence boasts of an indoor basketball court with the Cowboys logo on the court, a Cowboys mural on the wall, and a slide going from the second floor directly to the court. Yup, a slide! The avid golfer also has an indoor golf setup, which will remind you of Entourage. Before moving to this house, he lived in another Dallas abode. He listed the Mediterranean-style home in Irving for sale at $1.5 million. The house came equipped with six bedrooms, four bathrooms, a pool, and spa. Tony Romo also drives in an expensive Rolls Royce Ghost.