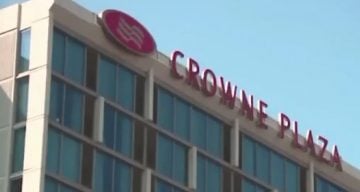 The case of Kenneka Jenkins leaves a lot to the imagination. Many who are aware of her case have watched the video countless times, and some are taking to social media to discuss their theories.

According to the latest report, the investigation of Kenneka Jenkins’ death is still ongoing. And, according to the authorities, they are leaving no stone unturned to determine the cause of her death.

Kenneka Jenkins is now famously known as “the girl found in the freezer.” She was found at the Crowne Plaza Hotel in Chicago’s Rosemont area, dead in one of the hotel’s walk-in freezers. She was found at approximately 12:30 a.m. Sunday.

It seems as though what started as a fun Friday night birthday party in a hotel room, ended in tragedy for the Jenkins family. Jenkins was at the party with her friends, but her mother received a phone call at 4:00 a.m. from one of Jenkins’ friend, who claimed that they could not find her.

Jenkins’ mom, Tereasa Martin rushed to the hotel to find her daughter and persuaded the cops to search for her, as well. However, according to Martin, police advised her to wait a few hours before filing a missing persons report, as they said her young teen could show up. Jenkins was finally found Sunday morning around 12:30 a.m., dead at the scene.

The authorities told Martin that according to the surveillance video of the hotel, Jenkins was seen standing near the front desk at around 3:20 a.m., and she looked extremely drunk. They originally informed Martin that there is a possibility Jenkins’ entered the hotel’s walk-in freezer on her own and died there. However, her mother is confident that foul-play is involved and that somebody murdered her daughter.

Another new theory that has come up states that the Crowne Plaza Rosemont owner was involved with Roberts to kill Jenkins. The theory suggests that Jenkins was invited to the party by one of her friends, who was paid either $200 or $2,000 to rape a drunk Jenkins.

It is further rumored that the hotel is popular for organ trafficking. So, there is a possibility that the hotel owners may be involved in the death of Jenkins.

This theory is further supported by the fact that the hotel owners at first refused to show the surveillance video of the hotel. Also, another interesting fact is that the area where Jenkins was found was under construction, and the security cameras were allegedly not functioning in that part of the hotel. This conspiracy theory has people wondering who the Crowne Plaza Rosemont’s owner is.

Who Is the Crowne Plaza, Rosemont’s Owner?

Hotel Crowne Plaza is a group of upscale hotels and resorts. It is a part of the InterContinental Hotels Group family of brands.

According to the latest developments, Rosemont officials will share the hotel’s surveillance video with Martin.

On Wednesday, Rosemont’s Mayor Bradley Stephens said, “It’s unfortunate that some of that stuff’s convoluting the investigation because all those leads have got to be followed up on. He continued, “As I’m sure you’ve seen, there’s a lot of different, conflicting speculation out there, so (police) are doing their best to come to a quick resolution, obviously. I think everybody wants to know what happened.”

For now, these are just floating rumors. The autopsy reports will certainly help to solve the mysterious death of Kenneka Jenkins.

Kenneka Jenkins death has certainly garnered a lot of attention in this week. Hopefully, the case will be solved soon, and that justice will be served to the Jenkins’ family.