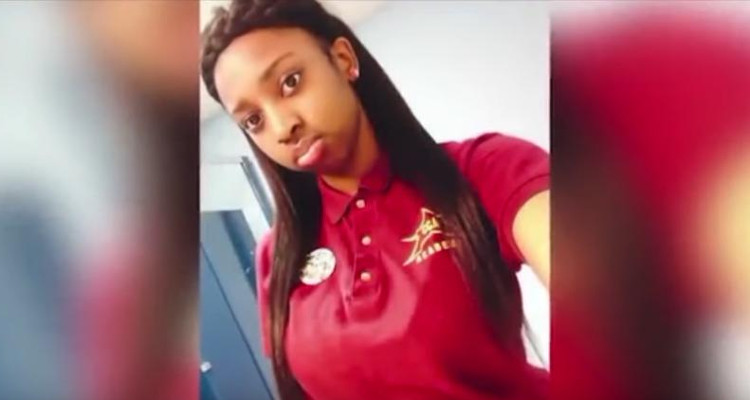 Kenneka Jenkins and Monifah Shelton are two teens from Chicago who are making headlines. The girls were friends but some things aren’t adding up. Did Monifah Shelton have anything to do with her friend’s death?

19-year-old Kenneka Jenkins from Chicago’s West Side went to a party with her friends at the Crown Plaza Hotel in Rosemont late Friday night (September 8). The last known contact with Jenkins was when she texted her sister at 1:30 a.m. on Saturday. At around 4:00 a.m., Jenkins’ mother, Tereasa Martin, received a call from her daughter’s friends that Kenneka was missing and they were unable to find her. Jenkins’ friends were in a car that Martin lent her for the night, and they had Jenkins’ cell phone with them, as well.

In the wee hours of Saturday morning, Martin began the search for her daughter at the Crown Plaza Hotel. She urged the hotel staff to check the surveillance feed from the CCTV cameras, but they refused to do so without a missing persons report from police. So, she called 911, but was told to wait a few hours before filing a report in case Kenneka turned up.

Kenneka Jenkins’ sister filed a missing persons report later that morning and authorities commenced an 11-hour search in the hotel where the teen was last seen. Video footage didn’t provide any clues about Kenneka Jenkins’ whereabouts.

The missing teen’s family returned to the hotel for a third time and began asking guests if they knew anything about Jenkins. Staff felt they were disturbing the guests and complained to the police, but one responding officer took pity on the family’s plight and reviewed the footage again.

They were informed that one feed showed a visibly drunk Jenkins stagger her way to the front desk at around 3:20 a.m. The family stayed at the hotel until 1:00 a.m. Sunday, when the police informed them that Jenkins was found dead in the walk-in freezer. It was not clear who found her body, but according to reports, construction was being done on the part of the hotel where she was found, so though the freezer she was found in was not being used, it was turned on. The autopsy report to determine what killed Jenkins have not been released.

Police didn’t initially suspect foul play in Kenneka Jenkins’ death, telling Martin that her daughter was inebriated when she “let herself into the freezer and died inside.” But that part of the hotel where the freezer is was not someplace guests are able to access easily as it was a zone under construction. The freezer was turned on and working but there was no food inside.It has not been confirmed if the area was closed off to guests.

After questioning Kenneka Jenkins’ friends, reports say that their stories weren’t consistent. Martin herself doesn’t believe her daughter would be able to open large steel doors of the freezer while drunk.

Immediately, fingers were being pointed. Martin lambasted hotel staff and law enforcement for not taking heed of her situation right away. She felt that if they would have searched sooner, they might have found Jenkins alive.

Sympathizers following the news are suspecting Jenkins’ friends, particularly one: Monifah Shelton. Some of Kenneka Jenkins’ other friends accused Shelton of setting Kenneka up with shady men in exchange for money.

Did Monifah Kill Herself?

Kenneka Jenkins’ case took a drastic turn earlier today with the Twitterverse claiming Monifah Shelton was reportedly found dead in her room from an apparent suicide. According to the alleged suicide note found, Shelton couldn’t take the accusations that she set her friend up to be killed, so she decided to take her own life. However, Monifah’s death is unconfirmed and the only source claiming she committed suicide is not credible.

Monifah’s supposed Instagram page says “R.I.P. Best friend” and the accusations are addressed in her latest post saying that she’s contemplating suicide. However, a clickbait article that has gone viral is claiming that she killed herself. Again, this news has not yet been confirmed.

Monifah’s Instagram bio contains the link to a Facebook live video. The auburn-haired girl in the video is mistakenly believed to be Monifah, but according to some sources, she’s actually another friend of Kenneka named Irene Roberts. Monifah is seen towards the end. Some comments on the video claim that they can hear a voice, supposedly Kenneka’s, in the background shouting “Help me!” before it is drowned out by music. Again, this is speculation that has been reported on.

Kenneka Jenkins’ case is gaining national attention. At this time, despite claims that Monifah Shelton is dead, there is no credible source to back that allegation up.