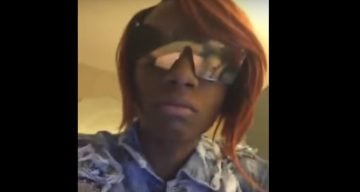 The night Kenneka Jenkins died, her friend Irene Roberts live streamed a video of her friends allegedly hanging out in a room at the hotel where Jenkins was found dead. Based on what they saw in the video, many people are speculating that Irene Roberts and Monifah Shelton are connected to Jenkins’ death. Since the video surfaced, some are wondering if Irene Roberts turned herself or the video in.

19-year-old Kenneka Jenkins was found dead in a walk-in freezer at the Crowne Plaza Chicago O’Hare Hotel & Conference Center, in Rosemont, Illinois last weekend, and since then, the story has gone viral. She was at a party with her friends in one of the hotel’s rooms on Friday night. But around 4:00 a.m. Saturday morning, Jenkins’ friends notified her family that they lost track of her. Her body was discovered by officials on Sunday morning, almost a day after she was first reported missing.

Jenkins’ mother, Tereasa Martin, told reporters that the police informed her that they believe Jenkins entered the freezer in an inebriated state and died inside. However, Martin is questioning how this could have happened to her daughter and is looking for answers. Jenkins’ autopsy report has not been released as of yet, so her official cause of death is unverified. Nonetheless, there is speculation online that the teen’s death is connected to a video uploaded by an alleged Kenneka Jenkins friend.

After seeing a Facebook Live video posted by Irene Roberts, many people on social media are theorizing that Jenkins had an argument with Roberts and Monifah Shelton, who are said to be among the last people to see Jenkins alive. People who saw the video are wondering if Irene Roberts turned herself in. Here is what you need to know.

Roberts posted a Facebook Live video from the hotel room she was in with her friends. In it, people were drinking, smoking marijuana, and Roberts was answering her phone and telling others to go to their room.

Irene Roberts’ video was watched millions of times, with people online looking for small details. Jenkins’ family asked everyone who was in the video to come forward and reveal what happened. The police are investigating the video and trying to find out if there was any foul play involved.

Rosemont Police spokesman Gary Mack said, “Yes, they’ve looked at it and continue to look at it and all the other social media videos and posts. They are leaving no stone unturned as far as trying to corral everyone they can and talk to them and interview them about what happened and what was going on that night.”

Also Read:  Who Is the Crowne Plaza Rosemont’s Owner? Is He Kenneka Jenkins’ Killer?

Irene Roberts Has a Son

Roberts is 21 years old has a son named TJ. She posts pictures of him and based on them, it is speculated that he is around three years old. There are no details about the father of her son, but according to Roberts’ Facebook page, she is single.

Did Irene Roberts Turn Herself In?

It looks like the hotel room party was to celebrate Roberts’ birthday. Some believe that Kenneka Jenkins was invited to the party by Shelton, and that she was not very close to Roberts. Currently, no charges have been placed as police are still investigating Jenkins’ death.

Community activist Andrew Holmes said, “Best friend, no friend, you’re a suspect, you was in there, just come forward. You was happy enough to put yourself on Facebook, now be happy enough to come over here and tell these detectives what happened. Everyone that was in that room should march down to the police department. Somebody inside that room knows what happened.”

A new video surfaced online claiming that Roberts went to the police station. The individual in the video shows someone sitting on a chair and her face is not clear, but people are claiming it is Roberts.

Authorities have not revealed details about whether or not Roberts turned herself in. How she might be connected to Jenkins’ death, and whether or not foul play was involved has also not been disclosed. Speculation is rife online, but as police are still investigating the case, nothing is confirmed.