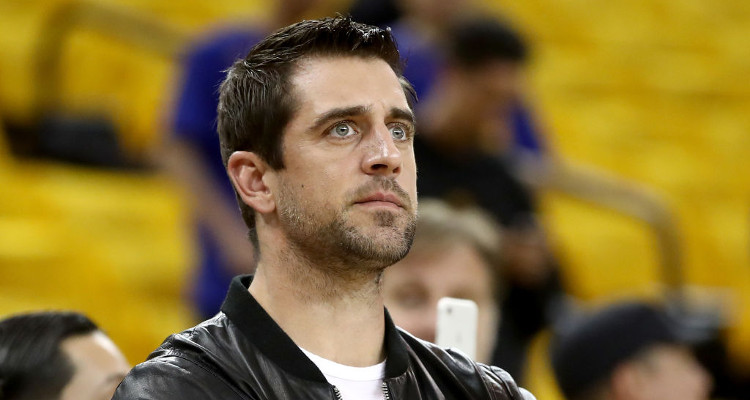 Whether it’s the football field or game shows, Aaron Rodgers’ competitiveness is legendary. He recently helped his non-celebrity team mate win $100,000 on ABC’s The $100,000 Pyramid on Sunday (June 25). Before this, he beat three of his fans on Big Fan, where they competed to prove that they knew him best. We wonder if his girlfriends have seen his competitive streak? Aaron Rodgers recently came out of a relationship and is already at the center of new romance rumors. Who is Aaron Rodgers dating in 2017? Take a look at his dating timeline right here.

It’s not confirmed whether the Green Bay quarterback has dated Henderson or Scott. Henderson, a Sports Illustrated model, was seen with Rodgers a few times back in 2009. There was speculation that they were dating, but there was no confirmation on the matter. Rodgers was later romantically linked to Scott, the lead singer of Lady Antebellum. But that was brushed off as pure speculation.

Gossip Girl actress, Jessica Szohr had broken up with her co-star, Ed Westwick and was reportedly dating Rodgers in 2011. She sent the rumor mill into a spin when she was seen with the quarterback at a Milwaukee Bucks game. They briefly broke up because of her hectic schedule, but eventually got back together. They were seen celebrating New Years in 2014 with Szohr’s pal, Taylor Swift. But the relationship didn’t work out, and they went their separate ways again.

The non-celebrity may be an anomaly in the world of star players and their celeb girlfriends, but their relationship was said to be quite a serious one. Newton and Rodgers were childhood friends, and her sister was on The Bachelor Season 15, much like Rodgers’ brother, Jordan who won The Bachelorette. Rodgers at the time was at the center of gay rumors. But his father shot them down saying his son is engaged to Destiny Newton. However, their relationship ended before they made it to the altar.

The actress was the football star’s most recent relationship. They reportedly met at the CMA Awards in 2014 and were later spotted together at a Malibu getaway. As ideal as they were together with their many red carpet appearances, Dubsmash videos, and parenting a dog, their relationship wasn’t without hurdles.

Jordan Rodgers, on The Bachelorette, aired the family’s dirty laundry saying that Aaron hadn’t spoken to the family in years. Some reports claimed that Munn was the cause of the rift between Aaron and the rest of the Rodgers. There was also talk that Munn was affecting his performance on the field.

The couple was last seen together on Valentines Day this year. However, they called it quits in April, after three years of dating.

Just weeks after Rodgers and Munn split, he sparked another romance rumor when he went golfing with the 2017 Baywatch reebot’s new CJ Parker, Kelly Rohrbach. The sighting also led to rumors that they had been dating while he was still with Munn.

However, a rep for Rodgers refuted the overblown claims, “This needs to be clarified,” said the source. “Aaron and Kelly are just friends, and they went to play golf together. There’s absolutely nothing weird or scandalous there, and it’s ridiculous that [the tabloids] are making it into something.”

So Rodgers is currently single and reports about his dating life are bound to be tabloid fodder. Regardless of all this, he’s going to have fun, as the source said, “You’re going to see him out and about with friends, and you’re going to see him with girls. That’s just going to happen. He’s having a good time hanging out with people who he likes. He’s just having fun, and he deserves it.”