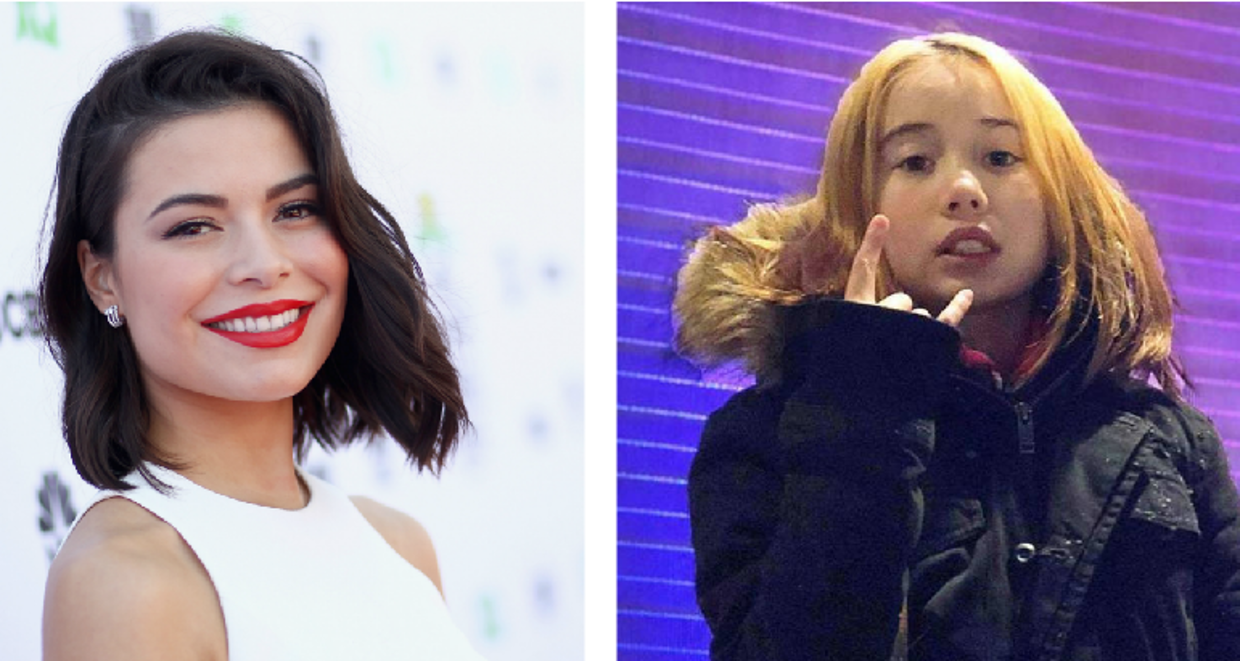 There is a little girl creating a ruckus on the Internet, and she calls herself Lil Tay. Although she looks like a sweet little cutie, the child is often heard cursing, using the F-word and the N-word constantly! She makes videos flexing all the riches she claims are hers, and she’s even seen smoking a carrot like a blunt! So, the real question is; who is Lil Tay and where in the heck are her parents?!

If you watched the video of the fight between Danielle Bregoli (aka Bhad Bhabie) and Woah Vicky, you might have also seen a child in the midst of the fight! She was none other than Lil Tay, who claims Miranda Cosgrove manages her. She and Woah Vicky are good friends, but that’s not at all what she is known for.

Talk about being a potty mouth—and she’s not even a decade old!

Youngest Flexer of the Century

Or at least that’s what she calls herself on all social media platforms. Lil Tay’s age is nine, and she is heavily influenced by the hip-hop lifestyle.

The little girl also makes rude comments and uses foul language on Instagram and YouTube, which she’s been known for doing since 2015.

This was also one of the reasons why her accounts were taken down several times before. The other reason being—she’s nine!

You need to be at least 13-years-old to have an Instagram account, and that’s why there were many people who reported her photos, videos, and eventually the account itself.

Still, Lil Tay, whose parents are nowhere to be seen, comes out on social media, curses her “haters” and shows off her home, clothes, watches, and jewelry.

In one video, the little girl even brags about her bathroom while she said, “my toilet costs more than your rent!”

Lil Tay (whose real name could be Taylor), fans out cash and says she is trying to make her “mama proud.”

She almost cried in a video message, after her account was reported and taken down. See the little girl’s plea to keep talking trash right here:

Apart from insulting every single person who could ever watch her videos, she also behaves as though she is a millionaire!

Lil Tay says she’s from Atlanta and that she was broke and poor when she was a six-year-old. But then she woke up one day and decided to change her fate and “started working hard moving bricks” to achieve her riches (which seems unlikely).

When she said she moved bricks to become rich, did she mean selling drugs or moving a brick in the literal sense; we are unsure—because again, she is nine! Since she is just a child, we are not even sure she knows what “moving bricks” really means, but this persona she puts on is making people cringe.

See what the Twitterverse has to say about Lil Tay:

somebody call CPS on lil tay’s parents. that lil girl don’t need to be around ppl like that at 9 years old

just reported liltay’s instagram account. she’s 9 years old acting hard for the gram. this shit is getting out of control. these non poc CHILDREN need to stop “flexing” on social media acting like they’re hard & making MONEY off it. while poc CHILDREN are getting shot at

It’s a mystery why these young “up and coming” rappers are obsessed with actress Miranda Cosgrove and the brand Gucci.

First Lil Pump, now Lil Tay. This underage rapper seems to be thoroughly impressed with the teen she shares her moniker with.

She is also known as Lil Gucci Tay and says that her Instagram account is managed by the iCarly actress herself. But researching a connection between Cosgrove and Lil Tay doesn’t turn up much. Some believed Miranda Cosgrove was her older sister managing her account, but that is unconfirmed as sources say Cosgrove is an only child.

The nine-year-old who says she is “partially black” went to the lengths of calling herself Lil Tay Cosgrove Jetski. She is even playing herself out to be Miranda Cosgrove and Lil Pump’s fantasized love child!

However, the 24-year-old actress has not commented on these developments, and for good reason! She is not about to give fodder to such rumors.

On the other hand, Woah Vicky’s boyfriend )who calls himself the Virgin Child on Instagram) posted a picture of himself, Victoria Waldrip (Vicky), and Lil Tay posing as a family.

And the caption read, “One happy family. Me and Vicky adopted our daughter tay tay.”

But his girlfriend Woah Vicky seems to be on a different page altogether!

In an Instagram story, she calls Tay her sister!

Amongst all the parental mess, Tay’s real mother and father are nowhere to be found.

Is This The Future of Rap? 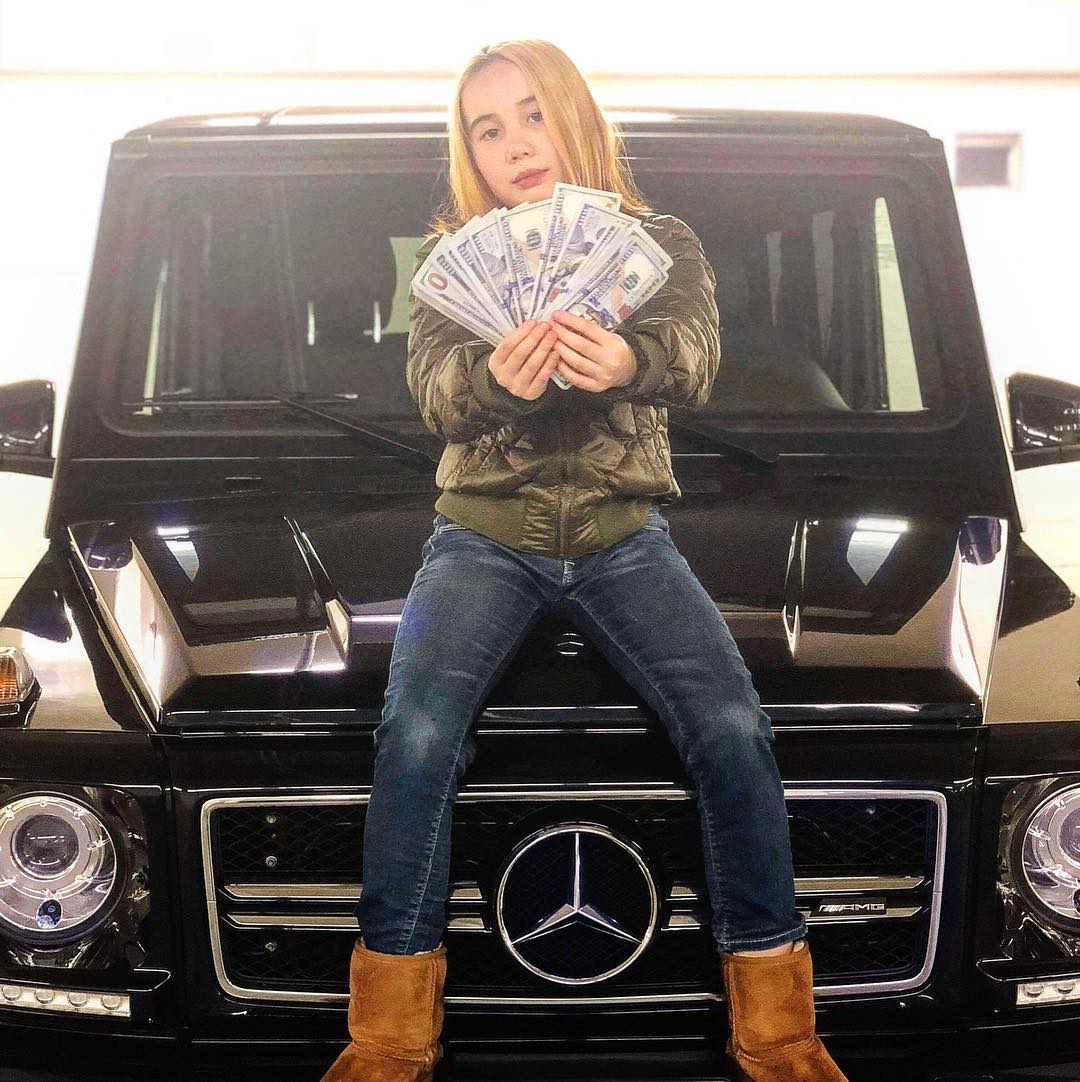 Lil Tay sitting on a Mercedes car and showing off money Credits: Instagram/liltay

A person on social media says Lil Tay’s ethnicity is Filipino, but it is not confirmed yet. The Asian-looking girl was apparnetly signed on by rapper Chief Keef around April 9, 2019, to collaborate on music.

In an interview, Tay said that she started rapping at the age of seven, and that she is inspired enough to drop new tracks on a daily basis.

She said her favorite artist is Lil Pump, and that she would love to perform with the 17-year-old rapper live.

Her Instagram page may have a limited amount of pictures as of now, but she still has over 400k followers!

The self-proclaimed “multi-millionaire” says she owns a sports car worth $200,000 and wants her haters to know that she earned it.

Her latest song with Chief Keef could be called “Gang Gang” as she has been using the term often in her recent posts. But again, this has not been confirmed, and we really can’t tell if anything this little girl says is legit.

Also Read: Who is Woah Vicky? How Rich is Victoria Waldrup?

Also Read: Danielle Bregoli Gets Her Hands On Woah Vicky! Was Someone Hurt?