Country music star Tanya Tucker’s checkered romantic past is a sad country song in itself. Nonetheless, her romantic hardships don’t overshadow her role as a mother. The hitmaker is the mom of three, who are all following in their mom’s footsteps. Her daughters, Presley and Layla, are every bit their mother in terms of talent and beauty. But there’s a common misconception that the girls’ father may have been Tucker’s famous ex, the late Glen Campbell. Who are Tanya Tucker’s daughters? It’s time for Presley and Layla to shine!

Tanya Tucker and Glen Campbell Didn’t Have Children Together

Country music legend Glen Campbell’s relationships and marriages were as famous as his music. But it was his relationship with Tanya Tucker that was the biggest staple in the tabloid gossip of their time.

They began dating after Campbell’s third divorce, around 1980, and also collaborated on several songs together. After their breakup a couple of years later, Tucker reportedly wrote “Forever Loving You” based on their relationship. Meanwhile, Campbell went on to marry for the fourth time. Years later, Tucker still had fond memories of Campbell. After the “Rhinestone Cowboy” passed away in 2017, she paid tribute to him

Campbell had six sons and three daughters from his four marriages. Campbell and Tucker, however, didn’t have any children together.

Tucker was later in a relationship with actor Ben Reed. She had a daughter, Presley Tanita Tucker (born July 5, 1989), and son, Beau “Grayson” Tucker (born October 2, 1991), with Reed. 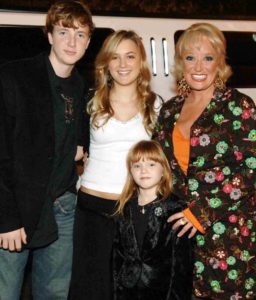 Tanya Tucker was then in an on-and-off relationship with another musician and songwriter, Jerry Laseter, for many years. Tucker cancelled their wedding days before the ceremony when she was pregnant for the third time and didn’t want to walk down the aisle pregnant.

Tanya Tucker and Jerry Laseter’s daughter, Layla LaCosta Laseter, a.k.a. Layla Tucker, was born on June 25, 1999. Tucker took time off from music to focus on her daughter and replanning the wedding, but her relationship with Laseter eventually ended for good.

Tucker’s Daughter Presley Is a Musician

Oklahoma-born, L.A.-based actor Ben Reed’s children with Tanya Tucker are following in their mom’s footsteps in the music industry. Both Presley Tucker and Beau Tucker are musicians, and have performed with Tucker.

Presley is doing her own thing in collaboration with her friend, Spencer Bartoletti. After meeting at a Nashville dive that is now the George Jones Museum, Presley Tucker and Bartoletti combined their songwriting and singing talents to form their band Reverie Lane, along with other instrumentalists.

..that time we got to play Hardly Strictly Bluegrass with Mama T and these cool dudes 🤯

Tanya Tucker is the ever-proud mom who promotes Reverie Lane every chance she gets. Even without her influence, Presley and Reverie Lane are immensely popular as their busy performance schedule proves.

Presley Tucker is also registered in SAG-AFTRA. However, her only known TV credit is an appearance on her mom’s reality show, Tuckerville.

Layla’s Father Was Arrested for Stealing from Tucker

Layla Tucker’s parents had a turbulent on-again-off-again relationship. Tanya Tucker postponed her wedding to Jerry Laseter when she was pregnant with Layla. However, their engagement ended few months after Layla’s birth when the country singer accused her fiance of domestic violence.

What followed was a custody battle over Layla. After the fifth alleged incident of domestic violence, Tucker sought a restraining order against Laseter in 2005. The verdict of that case is not known.

Tucker also said she returned the engagement ring that Laseter gave her. She alleged that he was withholding their daughter and she considered filing charges against him.

In 2007, Laseter and a woman named Chrislynn Jones were arrested for stealing $500,000 worth of wardrobe and jewelry from Tucker’s tour caravan. Jones was reportedly Tucker’s backup singer and was dating Laseter.

The wardrobe and jewelry were returned to Tucker. Laseter and Jones were charged with felony theft.

Layla’s middle name is a tribute to La Costa, Tanya Tucker’s older sister. Much like her mother, aunt, and siblings, Layla Tucker is also a musician.