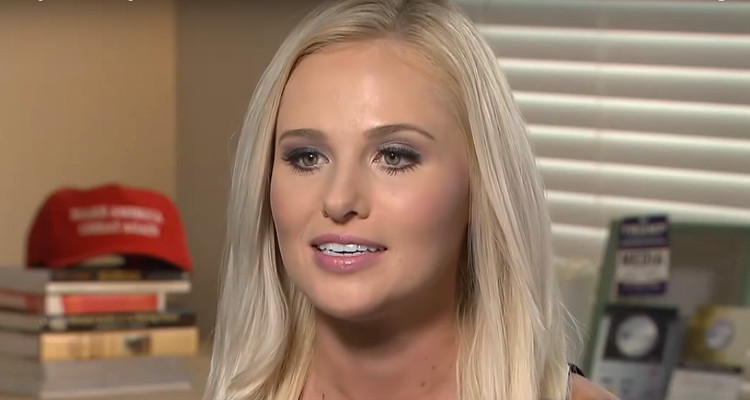 Tomi Lahren is a feisty young woman, who isn’t afraid to voice her opinions, even on national television. With the lethal combination of beauty and brains, Lahren is a popular conservative political commentator and former television/online video host. Lately, she has been in the news herself for making some pro-choice comments. Due to some “employment issues,” Tomi Lahren and her former boss, Glenn Beck are in a legal battle. For more details, we have details from Tomi Lahren’s wiki.

Born on August 11, 1992, Tomi Lahren grew up in Rapid City, South Dakota. She was born to a military family and is of German and Norwegian descent. She attended Central High School and graduated from the University of Nevada, Las Vegas in 2014.

Lahren was quite proactive in college. She hosted and was an associate producer for The Scramble, a political roundtable show for her university’s television program, and interned for Republican congresswoman, Kristi Noem, becoming the first intern for Noem’s Rapid City office.

After graduating, Tomi Lahren moved to San Diego, California to start her career in media.

In 2014, Tomi Lahren snagged an internship with One America News Network (OAN) and made her television debut with her show, On Point with Tomi Lahren. The show steadily became popular and in July, 2015, a video of Lahren’s commentary concerning the 2015 Chattanooga shootings garnered widespread attention.

The Libs aren't going to spew their liberal crap on my dime. My response to your emails and a liberal professor's worst nightmare. Final thoughts up now on my official Facebook page and later on @theblazetv #TeamTomi #Liberals #liberalcolleges

Lahren’s last show with OAN was on August 19, 2015, as she moved to Texas to work with TheBlaze. In January 2016, she endorsed Marco Rubio for president in the primary. On November 30, 2016, Lahren appeared on The Daily Show with Trevor Noah for a 26-minute interview. Many critics compared her appearance with former host Jon Stewart’s friendly rivalry with Bill O’Reilly.

On March 17, 2017, Lahren made a guest appearance on The View. On the show, she said that women should have access to safe abortion and accused pro-life advocates of being hypocrites.

For a young girl like Tomi Lahren, who has only been in the limelight for two years, that’s a pretty impressive figure! And we are sure the amount will increase in no time.

While she was working with TheBlaze, Lahren’s monthly salary was $16 thousand.

The conservative political pundit squeezes out time from her busy schedule to date. And we are sure her fans are interested to know who is she dating right now! At the moment, it looks like the infamous commentator is single. Here’s a look into the 24-year-old’s dating life:

At 27, Navy SEAL Jared Christian was the man in Lahren’s life in 2015. In fact, this handsome blond from Utah inspired her viral commentary, in which she called out Barack Obama for leaving American warriors at risk. The two started dating in February 2015 but eventually, the passion fizzled out.

The next man in Tomi Lahren’s life was Chase McNary, the second runner-up on The Bachelorette. Rumors of the two dating began in second half of 2016. Their compatibility was evident in their tweets. The internet quickly took notice of their growing affinity, and they were even spotted together in Las Vegas, presumably to attend the iHeartRadio Festival. But that too didn’t last long.

Tomi Lahren has always been a controversy magnet. After calling out to Barack Obama, taking on Beyoncé, and criticizing Jesse Williams, Lahren is now being scrutinized for her pro-choice opinions.

In March 2017, her guest appearance on The View stirred much controversy. On the show, Lahren commented on whether or not a woman should get abortion is entirely her own choice; the government shouldn’t have a say in it.

Her pro-choice views on the show reeked of hypocrisy considering her scathing response to Lena Dunham’s, “I haven’t had an abortion, but I wish I had” comment during a taping of her podcast.

Naturally, Lahren’s comments did not go well with her conservative fans, including her (former) boss, Glen Beck. The owner of TheBlaze blasted Lahren and said she wasn’t “intellectually honest.” Later TheBlaze’s managing editor, Leon Wolf, confirmed that Lahren’s show would “not be in production this week.”

Goodbye for now NYC! It's been quite the adventure. Back to Dallas! #TeamTomi #NYC #adventurethatislife

In response, Tomi Lahren sued the network for wrongful termination, claiming that she was fired for her pro-choice views expressed on The View. To this, Glenn Beck and TheBlaze filed a countersuit against Lahren, challenging her claim. They asserted that she is still an employee with them; her show is just off the air for now.

In July 2016, Lahren’s tweet comparing the Black Lives Matter movement to the Ku Klux Klan caused mass upheaval. Tens of thousands of people signed a Change.org petition in response, asking for her to be fired from TheBlaze. But the petition was unsuccessful.

Also Read: Up Close with Brock Yurich: Our Exclusive Interview with “The Outcasts” Actor!

I didn't get where I am at age 24 by sitting back and shutting up. I'm setting the record straight, finally. Catch my exclusive interview with @nightline tonight 12:35amET. #TeamTomi #Nightline #ABC #thetruth