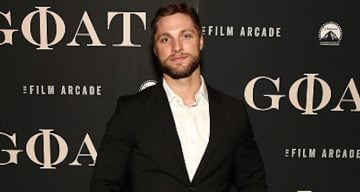 With so many talented actors in Hollywood, it can be hard to spot them all. That’s why, when it comes to the upcoming teen comedy, The Outcasts, we thought it best to get in touch with one of the film’s resident bullies and “jock of the walk,” Brock Yurich. The 27-year-old actor and personal trainer spoke with us exclusively to discuss his character, Kyle, what he brought to the role, and what he’s working on next.

Brock Yurich has worked on and produced several short films and also made appearances on last season’s NBC long-running hit drama, Law & Order: Special Victims Unit. Now, he gets to add another project to his list of accomplishments with his role in the upcoming comedy film, The Outcasts, which is set to hit theaters on April 14!

After being the targets of a humiliating prank by the high school Queen Bee (Peyton List), best friends and certified geeks, Mindy (Victorious’ Victoria Justice) and Jodi (The Middle’s Eden Sher) decide to band together with a group of misfits (including Awkward star, Ashley Rickards) in order to get revenge. Whether you’re into fantasy or science fiction (or anything that’s not fashion or sports) it’s time for the underdog to rise up and reclaim the school!

From the film @TheOutcastsMovie my one and only time I’ve ever been a cool kid. #outcastsmovie #film#setlife#actor

We sat down with Brock Yurich to get the inside scoop on the movie, the details on life outside of film, and what keeps him busy in his downtime. Check Out the exclusive Q & A below!

Q: What drew you to your role on The Outcasts?

A: “I read the script and thought it was great! They had me audition for one of the popular guys and I got the part. I thought he was a dick, but it was a funny part and when you’re being a bully, you don’t really get a full arc.”

Q: How did you prepare for your role on The Outcasts?

A: “I shaved my head and basically got into dick mode, which is easy for me [laughs] and it was sort of fun. It’s funny, because I didn’t have any lines originally, so I got to do some improv. And if I was hearing laughter after yelling “cut,” then I was doing a good job. It was also great because Peter Hutchings, the director, gave me a lot of freedom.”

Q: What was it like working with the other actors on set? Did you spend any time with them after?

A: “My first scene was with Ashley [Rickards] who was the star of MTV’s, Awkward. I just had to relax and be mean to her, but she was really cool. We got to eat together and hang out, but I’m a little too old to watch their shows and didn’t know who they were until I met them! But they were so nice and sweet.”

Q: Were you ever bullied growing up?

A: “Oh yeah, I was —middle school sucked and I think a lot of the bullying was when I was 12, 13, 14. But when I look back at it now, the bullying wasn’t that bad. I was a sensitive kid, I was teased and took that as bullying.”

Q: How do you juggle work and your personal life?

A: “I’m close with my family, but I just work really hard and spend most of my time working out, writing, producing short films, and features. I’d rather be on set than at the club these days!”  [Check out the trailer for one of Brock’s projects below!]

***Link to full trailer in bio!!****This is the next step in finishing my feature film “TEST.” Mike southerly, Paulo Mota and I created a conceptual Trailer inspired by my screenplay. Thank you @abbyjaros @gmaval63 and @jtyurich for making this possible! @pmota @iamthedarkknightrising @brock_yurich_films #test#film#indiefilm#bodybuilding#script#actor#brockyurich#brockyurichfilms

Q: What projects are you working on, now that you’ve wrapped The Outcasts?

A: “I wrote and directed a short, called 49. It’s based on the attack at Pulse and even though we don’t mention the name, it focuses on four people from the club, and I didn’t want it to focus on evil, just love and acceptance and helping each other. I used to work there to pay my bills and I lost people there. I didn’t know how to cope and my best friend Neema was the manager at the time and he helped a lot of people.”

The Outcasts will officially be released on Friday April 14, 2017, so make sure you get your tickets to go see it! You are definitely going to want to see Brock take on his role as Kyle, the school jock!