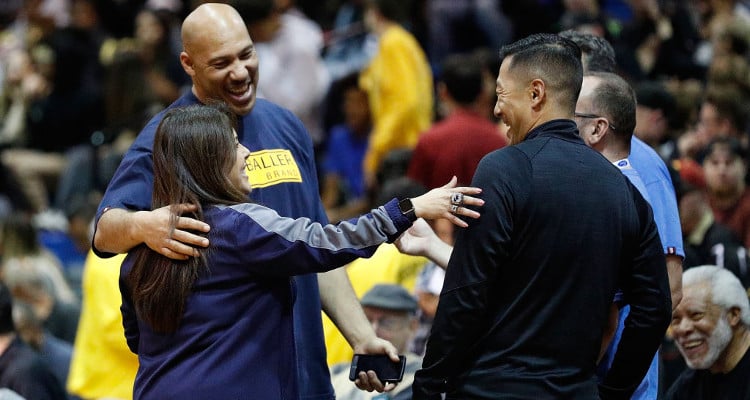 While LaVar Ball continues to be outspoken and feuding, his sons are dominating the basketball court. The eldest, Lonzo Ball is one of the top NBA prospects for the 2017 drafts. Undoubtedly, there’s no one prouder about the boys than their mother, Tina Ball.

LaVar Ball has an opinion about a lot of things (which is nothing new) and he’s been known to make some of the cockiest statements in basketball history. So, when he picks on LeBron James, the Cavalier responds by throwing shade at LaVar’s son, Lonzo Ball, the top pick in the 2017 NBA draft. Nevertheless, while LaVar will always find a way to keep himself and his sons in the news, one person from the Ball family has always shied away from the spotlight; LaVar’s wife, Tina Ball. So, we’d like to turn the spotlight on her for once with our Tina Ball wiki.

#1. She Met Her Husband on the Court

The best sports romances begin on the court. LaVar transferred from West Los Angeles College to Cal State Los Angeles after one season of college basketball. That’s where he spotted Tina on the court. According to a basketball scout, it was not Tina’s blonde hair and blue eyes that had LaVar smitten; it was her “length.” She stands at 6 feet tall, just six inches short of LaVall’s impressive height of 6’4″.

Tina was a basketball player in college too, and that’s where they fell in love. As LaVar later recounts, “I see this tall girl, very attractive, walking down a hallway and I go, ‘I don’t know what we’re going to do, but we’re gonna be doing something!’ Once that was in her head, I had her. I picked a big girl who was beautiful. A big stallion!”

LaVar was even confident on their first meeting that they’d be married one day. Tina retells their first meeting saying, “When we met, he told me we’re going to get married and have boys because he only makes boys, of course.” That was LaVar’s “master plan”- to have a basketball family! Well, he certainly got his wish!

#2. She’s an Athletic Director at a School

You would think LaVar is the first and only coach their sons have had, but Tina isn’t disconnected from sports. She is an athletic director at a middle school in Montclair, California. Having two parents active in sports played a role in shaping the Ball brothers, Lonzo, LiAngelo, and LaMelo.

“These boys were born to go pro,” LaVar said. “Your mom’s a P.E. teacher, I’m a personal trainer, your last name is Ball. How much more lined up can you be?” They had decided early on that their family wouldn’t be split between a dad coaching two kids at the gym, and a mom who stayed home with the youngest.

So, LaMelo started first grade a year early and when he was old enough, LaVar began the boys’ basketball training. The couple coached their sons to be the players they are today. LaMelo, having only trained with his brothers, could take on boys much older than him.

#3. She’s the Co-Founder of the Family Business

Raising potential NBA stars and teaching P.E. to middle-schoolers isn’t Tina’s only job. She also has a role to play in their family business. In 2016, LaVar and Tina took a step towards building their family’s brand and started their own clothing line called Big Baller Brand. They sound like the Kardashians of basketball!

LaVar is hoping to package Lonzo, LiAngelo, and LaMelo to secure a lucrative deal. He’s meeting with Nike, Adidas and Under Armour executives to work out an apparel partnership, but it’s proving to be a challenge considering their youngest has two more years of high school left before he can follow his brothers to UCLA.

Nevertheless, it doesn’t stop the outlandish LaVar to demand a few extra zeroes on his sons’ endorsement deals. “A billion dollars, it has to be there. That’s our number, a billion, straight out of the gate. And you don’t even have to give it to me all up front. Give us $100 mil over 10 years.” This statement caught some negative attention. Promoting his sons for personal benefit is why LaVar Ball has earned himself a few haters.

#4. A Reporter’s Question about Tina Has Gone Viral

During the UCLA Bruins post-game news conference, Lonzo Ball was posed a question by a reporter. “Lonzo, I apologize for asking a personal question. But there was a report that your mom had suffered a stroke. I just wanted to know if that’s the case and how you’re holding up if that’s the case,” the reporter asked. “I got no comment on that, man, it’s a family thing,” Lonzo said.

The question was based off an initial report by Armchair All Americans. The site was contacted by a member of the Ball family, who wishes to remain anonymous. The source gave harrowing details that Tina suffered a stroke in February and LaVar won’t let their sons see her, apparently fearing the negative media that could harm BBB sales.

The source said, “Also, Tina Ball, his wife had a stroke on Feb 21. She had life threatening skull surgery to relieve brain pressure – guess where Lavar was during the operation that could have killed his wife? – at the CHHS vs. LB Poly game with his sons, including Lonzo. He still has not allowed his kids to see their sick mother due to the media attention it would bring to him, and cause BBB sales to diminish. [Name of hospital] in [City of hospital], CA – Tina is there now and he only visits for 1 hour a few days a week, while her Mother has yet to leave her side. Pathetic!!!”

Whether or not this ‘relative’ is claiming the truth is anyone’s guess at this point. Tina, who was very active on Twitter also hasn’t tweeted since February 19, which fits the timeline, but there’s no official confirmation from the Ball family at this point.