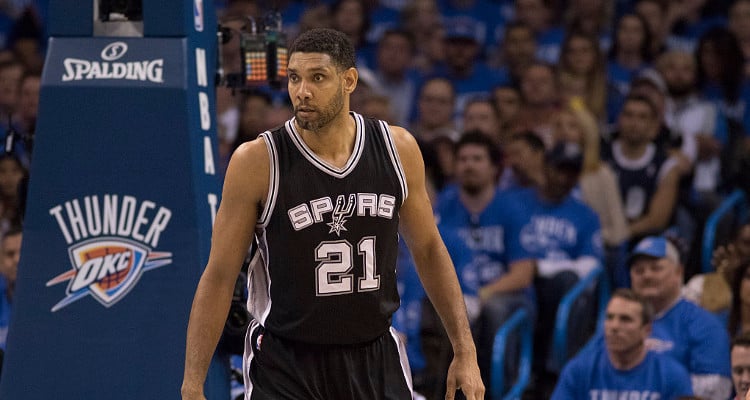 Tim Duncan may have hung up his San Antonio Spurs jersey, but he’s far from being out of the spotlight! After retiring from the NBA last year, he’s now focusing on family life with his girlfriend, Vanessa Macias and their newborn child.

Tim Duncan retired from the NBA in December of last year and appeared on a podcast, Road Trippin’ with RJ and Channing on Monday (March 27). On the podcast, he confirmed that he and his long-time girlfriend welcomed their first child, a baby girl. You’re going to love the story behind the little one’s name! Who is Duncan’s girlfriend? He has been dating Vanessa Macia for many years. Find out more about the future Hall of Famer’s girlfriend in Vanessa Macia’s wiki.

#1. She was on The Amazing Race

Vanessa Macias is a television personality and has appeared on a few shows. Her biggest TV credit is racing around the world in the reality competition, The Amazing Race season 20 in 2011. At that time, she was on the Dating Divorcées team and was in a relationship with her teammate, Ralph Kelly.

She also appeared on the travel show, Show Me Texas, where she covered a host of topics, from sports to politics. Macias was also a reporter on Great Day S.A and hosted the radio show, Talk Now S.A. She teamed up with Luis Munoz and the crew from Bauhaus Media Group to launch VAMOS! Travel Show.

Estimates of her net worth aren’t available, but Tim Duncan has amassed a net worth of $130 million in his NBA career, so we’re pretty sure she’s well taken care of!

#2. “Daring Vanessa” Loves Being in Front of the Camera

Macias’ bio on her web site says that she began modeling in her early teens and was offered a lot of jobs, too. Since finding herself in front of a camera, she made it her career choice. Two weeks after graduating from high school, she enrolled in the Radio, TV & Film school at San Antonio College.

She landed an internship at The News 4 San Antonio High School Sports Show as an on-air reporter. There, Macias worked with Don Harris, an Emmy Award-winning sports anchor, who influenced her to continue her studies at the University of North Texas.

Since graduating from North Texas, her news coverage earned her the moniker “Daring Vanessa.” Other roles she has worked in include spokes-model, communications specialist for State Senators, national TV show personality, sideline reporter, in-arena announcer and radio morning show host. Macias covers sports in San Antonio often, so you can imagine how she might have met a certain San Antonio Spurs power forward!

#3. She Had Beef with Charles Barkley

Former NBA player and now TV analyst, Charles Barkley is famous for being highly opinionated, especially about San Antonio. In one round of Charles Barkley vs. San Antonio, he commented, “Listen, you big ol’ women need to stop … ease up on them churros.”

Macias wasn’t one to take it lying down. She was seen wearing a “Barkley don’t know” t-shirt while (playfully) wagging her finger at him through the camera in warning. In response, Barkley had said, “That woman ain’t from here. They flew her in from Dallas! I guarantee you!”

The 36-year-old made peace with the former pro later in the best way —by sending him a plate of churros, and tweeting, “Churros are the new olive branch.” We love her wittiness!

I was violently assaulted for my churros. Churros are the new olive branch. #churrosforchuck pic.twitter.com/mqWRILObSv

#4. They Named Their Daughter after a Marvel Character

Tim Duncan was married to Amy Sherill with whom he as a daughter, Sydney and a son, Draven. They were dating since 1996 and were married in 2001, but the two didn’t last. They had an ugly divorce in 2013 with cheating allegations thrown at each other. After their divorce, Duncan started dating Vanessa Macias.

Thank you for the love and thoughts welcoming our little soul-changer, Quill.

In December 2016, the Spurs retired Duncan’s No. 21 jersey in a post-game ceremony. Macias was by his side and was sporting a baby bump! While many were speculating that she was pregnant, Duncan disclosed on a podcast that their baby girl was born last week!

Macias and Duncan named their first child Quill Duncan, after Peter Quill from Marvel’s Guardians of the Galaxy! Tim Duncan explained that the name is perfect because Macias is an avid writer. “My girlfriend, she also writes a lot too, so it’s like a pen quill,” he said. Duncan is also a comic geek and Marvel gave a nod to the NBA athlete’s love for comics by putting him on the cover of The Punisher’s 2014 issue.

Decided to spend my night watching The Punisher because it's on Netflix, apparently. Just remembered this cover featuring Tim Duncan. Gold. pic.twitter.com/KeqHbwHx4K